A national group of scientists and engineers is trying to make the country a better place. 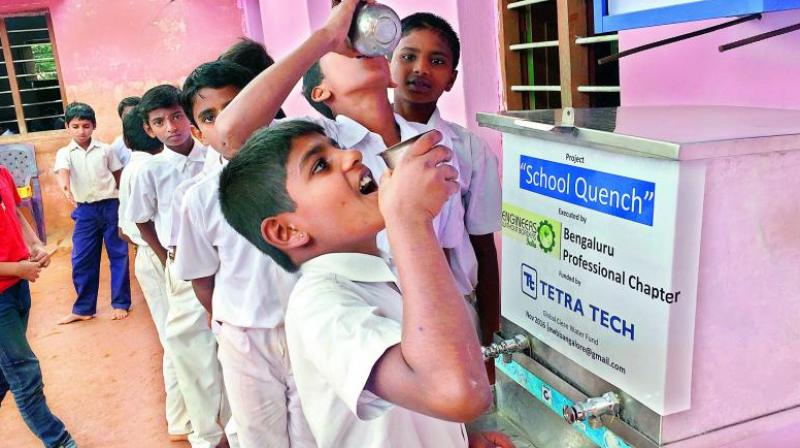 EWB has also played a significant role in supporting the ‘Digital India’ initiative, and establishment of eLearning centres.

Just as you read this report, a motley group of engineers, scientists and students from an engineering college is spending the weekend at Kakolu, a village 25 km from Bengaluru, creating a couple of ‘green toilets’ for 20-odd teachers and staff at a local government high school. A first in Karnataka, these toilets work on the principle of bio-digestion, and turn human waste into water without colour and smell, which could be used for gardening, Methane for cooking or room heating, and a bit of Carbon-dioxide, thus overcoming conventional problems such as sewage connections or cleansing of pits.   These engineers and scientists, on weekdays, work on new rockets, missiles, aircraft because they are on the rolls of Isro, DRDO, HAL, Infosys, and other tech firms working out of Bengaluru. On weekends, they take along students of engineering colleges, in this case, Sambhram Institute of Technology, Bengaluru, to give them a hands-on experience of executing such projects.

“We will complete this project by the end of February, says V. Dillibabu, president of the Bengaluru chapter of Engineers Without Borders or EWB. On weekdays, Mr Dillibabu is a scientist with the Gas Turbine Research Establishment of the DRDO in Bengaluru. In December, his team and he were cheered by students of the Morarji Desai Government Residential School at Chikkonahalli, Tumakuru district of Karnataka, when they installed a unique drinking water system — complete with filteration, storage, dispensation and disposal units, for 350 boys and girls. It brought relief for students like Deepa and Uma Mahesh, both of Class X, who had to endure bouts of cold and cough because of unfiltered water. “I used to miss classes due to illness, but now I can focus on my studies,” Deepa says, while taking a sip from the new system.

EWB is not all about helping students turn into entrepreneurs. For instance, a project on fuel briquettes, supported by this non-profit, has resulted in women setting up small fuel briquettes production units (fuel briquettes produced from agricultural and other biomass waste) in a cluster of villages in Madhya Pradesh, explains Bharat Chandra Maharaj, chairman, EWB India. Some students who were part of EWB’s student chapters’, now run their own enterprises on rainwater harvesting projects and other low-cost sustainable technologies. “I have decided to provide students with seed money from EWB India for projects they select,” adds Mr Bharat Chandra Maharaj.

EWB has also played a significant role in supporting the ‘Digital India’ initiative, and establishment of eLearning centres. The first eLearning Centre was set up in 2011 at Z.P. High School, Gowdavalli village, near Hyderabad, but thanks to Mr Bharat Chandra Maharaj’s perseverance, his colleagues at Pratt & Whitney and other supplier companies decided to support the establishment of more such units on the feedback received from teachers and students of the first school. The upshot: So far 34 eLearning centers have been established by EWB India- Hyderabad.

While the Mumbai chapter of EWB India has its plans ready to complete 500 toilet blocks, solar power systems, IT asset developments and biogas plants by 2020, EWB at Chennai has executed several programmes on women empowerment and green energy. And to drive home the point that EWB functions on a shoe-string budget, Mr Bharat Chandra Maharaj explains: “We have only one paid employee working from a single room office. Most of our professional members are with government organizations or corporates and work for free.”

So, when they are not executing a project, these engineers and scientists are meeting India’s young to explain how a rocket works. Such sessions, they say, will help inspire students to pursue careers in Indian R&D, instead of picking a career abroad. And with such synergy between them and students some amazing devices are being designed — a solar backpack or a flexible solar film to charge laptops and mobile phones; a robot-supported system which helps rescue children who slip into bore wells; sensors which help clear traffic; and an interactive app that aims to help high-school children score better grades.