Researchers are examining data on diet and radiation exposure on residents who lived near the World War II-era Trinity Test site. 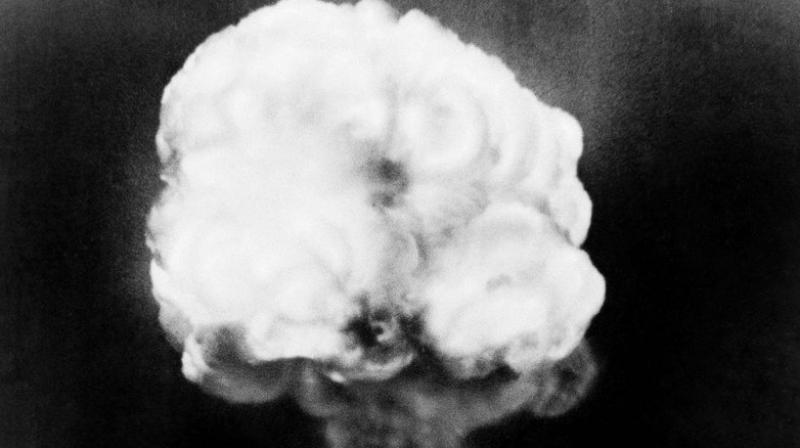 The study will then be published in a peer-reviewed scientific journal and could be available by next spring. (Photo: AP)

A long-anticipated study into the cancer risks of New Mexico residents living near the site of the world’s first atomic bomb test likely will be published in 2019, the National Cancer Institute announced.

Institute spokesman Michael Levin told The Associated Press that researchers are examining data on diet and radiation exposure on residents who lived near the World War II-era Trinity Test site, and scientists expect to finish the study by early next year.

The study will then be published in a peer-reviewed scientific journal and could be available by next spring, Levin said.

The announcement comes as descendants of families who lived in nearby communities are pressuring Congress to include them in the federal Radiation Exposure Compensation Act. Descendants say the Trinity Test caused generations of families to suffer from rare cancer and economic hardship.

Currently, the law only covers areas in Nevada, Arizona and Utah that are downwind from a different test site.

The bomb was tested in a stretch of desert near towns with Hispanic and Native American populations.

Residents did not learn that the test had involved an atomic weapon until the US dropped bombs on the Japanese cities of Hiroshima and Nagasaki and the war ended.

Monday is the 73rd anniversary of the Hiroshima bombing.

Tina Cordova, co-founder of the Tularosa Basin Downwinders Consortium, said descendants have been anxiously waiting for results from the National Cancer Institute study. But Cordova said she worried the questions researchers used were “culturally insensitive” and for months the institute wasn’t communicating about the study’s progress.

“We had been kept in the dark,” Cordova said.

Steve Simon, the principal investigator of the study and a staff scientist in the institute’s epidemiology and biostatistics program, said researchers made it a priority to include expertise from New Mexico residents in the study design process.

“To keep the communities well informed about the status of the study, the NCI team has sent regular email updates,” Simon said.

The institute said it may release the study’s findings to descendants before the study’s publication depending on the scientific journal’s policy.