Science   06 May 2017  Sky not limit for South Asia: Modi at satellite launch
Science

Sky not limit for South Asia: Modi at satellite launch

‘Isolated’ Pakistan claims it was kept out of project. 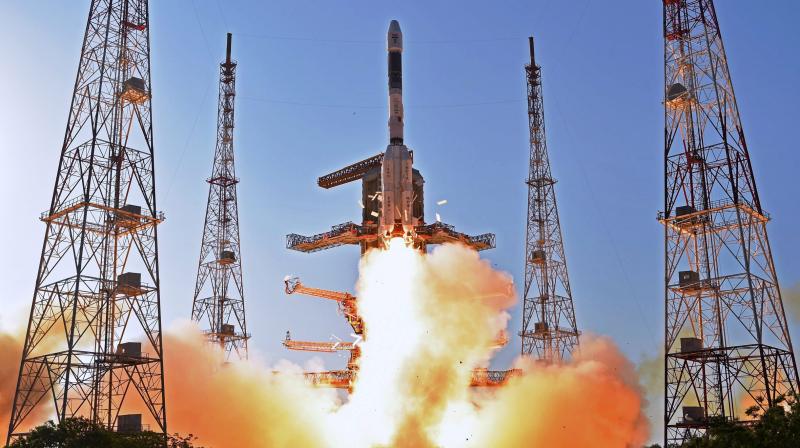 New Delhi: In a stunning development, India completely isolated Pakistan among the Saarc countries on Friday, with Prime Minister Narendra Modi holding a joint video conference with the leaders of all Saarc countries minus Pakistan on the occasion of the successful launch of the South Asian Satellite. In a veiled barb at Pakistan but without naming it, Mr Modi said the satellite launch that will benefit South Asia symbolises “cooperation, not conflict”, and “development, not destruction”. He noted that “the South Asian Satellite tells us that even the sky is not the limit when it comes to regional cooperation among like-minded countries”. The GSLV-F09 with the South Asia Communication Satellite was successfully launched on Friday by the Indian Space Research Organisation from Sriharikota.

In what is seen as a victory of Mr Modi’s diplomacy with the rest of the Saarc region despite Pakistan’s hostility, he was joined at the video conference by Afghan President Ashraf Ghani, Bangladesh PM Sheikh Hasina, Bhutan PM Tshering Tobgay, Maldives President Abdulla Yameen, Nepalese PM Pushpa Kamal Dahal “Prachanda” and Sri Lankan President Maithripala Sirisena, in what the external affairs ministry described as “an unprecedented video-conference held to mark the launch”. In a telling comment, also seen as a barb against Islamabad, Afghan President Ghani said at the video conference: “The gap between talk and action is bridged today. The advantages of cooperation outweigh the advantages of competition.”

[The Pakistan government on Friday blamed India for its exclusion from the project, saying New Delhi was not willing to develop it on a collaborative basis. “During the 18th Saarc summit, India offered to ‘gift’ a satellite to Saarc member states, to be named the ‘Saarc satellite’. Subsequently, however, India made it clear it would build, launch and operate the satellite solely,” Pakistan foreign office spokesperson Nafees Zakaria said, a PTI report from Islamabad adds.]

Mr Modi had earlier on Sunday described the South Asia Satellite as India’s “priceless gift” to its neighbours and on Friday again said it was part of the “sabka saath, sabka vikas” (cooperation from all, development for all) concept. Pakistan reportedly refused to join the project as it did not want the “gift” from India. Just a month after he assumed office, Mr Modi had said in June 2014 that “India will offer a satellite to Saarc countries to meet their socio-economic development and welfare needs through space technology”.

In his remarks on the benefits the satellite would bring, Mr Modi said: “This is first of its kind project in South Asia. And, through this, Afghanistan, Bangladesh, Bhutan, Maldives, Nepal, Sri Lanka, and India will together achieve: effective communication; better governance, better banking and better education in remote areas; more predictable weather forecasting and efficient resource mapping; linking people with top end medical services through tele-medicine and a quick response to natural disasters. The satellite would provide services specific to individual countries as per their own needs and priorities, as also common services.”

He went on to add: “Today is a historic day for South Asia. A day without precedent. Two years ago, India made a promise. A promise to extend the advanced space technology for the cause of growth and prosperity of our brothers and sisters in South Asia. The successful launch of the South Asia Satellite marks the fulfilment of that. With this launch we have started a journey to build the most advanced frontier of our partnership. With its position high in the sky, this symbol of South Asian cooperation would meet the aspirations of economic progress of more than one-and-a-half billion people in our region. And extend our close links into outer space.”

He then said: “I am immensely grateful to my fellow leaders from Afghanistan, Bangladesh, Bhutan, Nepal, Maldives and Sri Lanka for joining me today to celebrate this launch. I also deeply appreciate the strong and valuable support extended by your governments, without which this project would not have been possible. Our coming together is a sign of our unshakeable resolve to place the needs of our peoples in the forefront. It shows that our collective choices for our citizens will bring us together for: cooperation, not conflict; development, not destruction; and prosperity not poverty.”

The MEA, in a statement, referred to the PM saying “the project will touch the lives of the people of Afghanistan, Bangladesh, Bhutan, Maldives, Nepal, Sri Lanka and India through regional cooperation in space technology applications in telecommunications and broadcasting, tele-medicine, tele-education, e-governance, bank/ATM services, cellular back-haul, meteorological data transmission, disaster response and the networking of academic and research institutions.”