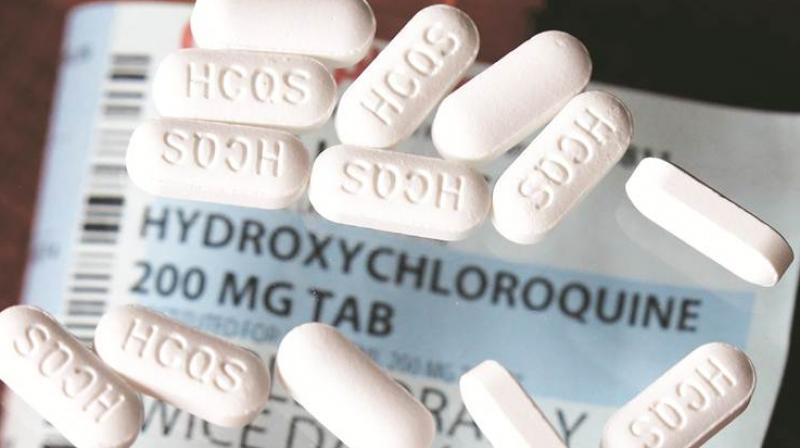 New Delhi: The authors of a controversial study published in The Lancet journal linking the use of malaria drug hydroxychloroquine with increased death risk in COVID-19 patients, have retracted their research paper, after they could no longer vouch for the veracity of the primary data sources used in their analysis.

It was soon followed by the withdrawal of another study, published in the New England Journal of Medicine, which suggested that underlying heart disease is associated with an increased risk of death among patients hospitalised with COVID-19.

"Today, three of the authors of the paper, "Hydroxychloroquine or chloroquine with or without a macrolide for treatment of COVID-19: a multinational registry analysis", have retracted their study," The Lancet journal noted in a statement.

It said the study's authors were unable to complete an independent audit of the data underpinning their analysis and had concluded that they "can no longer vouch for the veracity of the primary data sources."

Speaking about the significance of the retraction, Anurag Agarwal, Director Translational Research in Lung Disease at CSIR-Institute of Genomics and Integrative Biology, said "the retraction does not prove in any way that HCQ or chloroquine work, it simply proves that the concerns of very high mortality risk from the drug are unfounded."

"We can continue with trials till we know more," Agarwal told PTI.

The research, published on May 22, claimed to have assessed data from more than 96,000 hospitalised COVID-19 patients from six continents and reported substantially increased deaths and incidences of heartbeat rhythm changes associated with the use of hydroxychloroquine (HCQ) and closely related drug chloroquine.

From their analysis, the scientists had concluded that treating COVID-19 with the drugs was linked to decreased chances of in-hospital survival, and an increased frequency of heartbeat rhythm disturbances.

Soon the World Health Organisation (WHO) paused recruitment of patients to the HCQ arm in their SOLIDARITY clinical trial after the study was published.

However, on Tuesday, The Lancet published a statement expressing concern over the study after over 100 scientists from across the world flagged discrepancies in the research in an open letter to the journal's editor Richard Horton, adding the clinical trial of HCQ would resume.

According to the open letter, the HCQ research was based on a database from a company based in Illinois, US called Surgisphere Corporation, which according to the scientists, hosts COVID-19 patient data from hundreds of hospitals around the world.

From this database, the now-retracted study assessed data from 96,032 patients admitted to 671 hospitals across six continents. However, in the open letter, the researchers flagged several points of concern about the validity of this data, and the kind of analysis done in the study with it.

The scientists behind the open letter said there was no mention of the countries or hospitals that contributed to the data source and no acknowledgments of their contributions.

Citing an example, they said data on patients from Australia was not compatible with government reports from the country.

This prompted The Lancet to take note of these discrepancies and update the notice as soon as they conducted an independent peer-review investigating the source of the data.

When an independent third-party peer review of Surgisphere data was initiated with the consent of the co-authors of the study to evaluate the origination of the database, and to replicate the analyses presented in the paper, the peer reviewers said Surgisphere would not transfer the full dataset.

"Several concerns were raised with respect to the veracity of the data and analyses conducted by Surgisphere Corporation and its founder and our co-author, Sapan Desai, in our publication," the authors of the study wrote in the retraction statement published in The Lancet journal.

"Based on this development, we can no longer vouch for the veracity of the primary data sources. Due to this unfortunate development, the authors request that the paper be retracted," the statement noted.

When the independent peer-review was initiated by the journal, the co-authors themselves were unable to obtain details on the source of the data in their study from the hospitals they procured patient information from.

They said this was because of the client contracts to their servers due to which such data transfer violated the agreements and confidentiality requirements the clients had with the company.

It is right that these articles were retracted. However, the failure to resolve such basic concerns about the data during the course of normal peer review raises serious questions about the standard of editing at the Lancet," Professor Chris Chambers from Cardiff University in the UK said in a statement.

"If these journals take issues of reproducibility and scientific integrity as seriously as they claim, then they should forthwith submit themselves and their internal review processes to an independent inquiry, Chambers added.

Agarwal noted that in this case, the biggest fault is with the "authors who submitted a faulty paper," as even they had no access to the data, according to their disclosure.