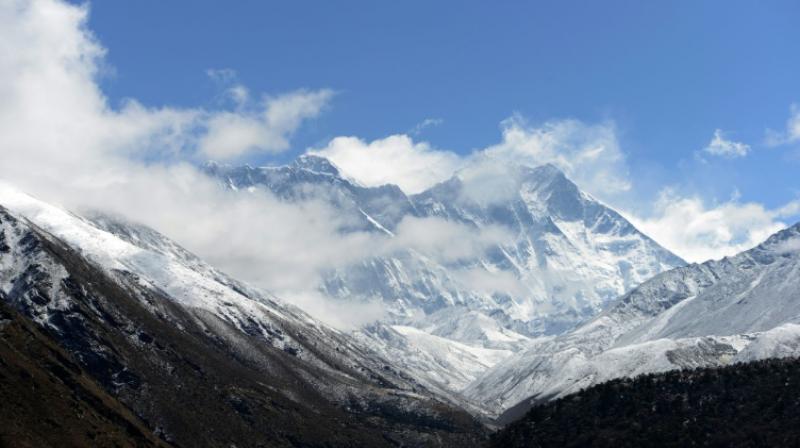 Nepal has issued a record number of permits to climbers wanting to summit Mount Everest this spring, an official said Thursday, prompting fears of overcrowding on the world's highest peak.

A record 373 foreign climbers have been cleared to scale Everest from the south side during a narrow window of good weather this month -- netting the impoverished Himalayan nation more than $2 million in fees.

Most attempt to summit the 8,848 metre (29,030 foot) peak with the help of at least one Nepali guide, meaning that more than 750 climbers will be heading for the summit in the next few weeks.

"The number of climbers issued with permits for Everest this spring is the highest ever," said Department of Tourism spokesman Durga Dutta Dhakal.

Heavy foot traffic was expected on Everest this year, with climbers forced off the mountain by the 2015 earthquake rushing to use their extended permits before they expire.

The busy spring climbing season on Everest was effectively shut for two consecutive years after a deadly icefall in 2014 killed 16 Sherpas, and an earthquake-triggered avalanche the following year claimed 18 lives.

The rise has led to concerns about potentially dangerous -- even deadly -- overcrowding on the mountain.

"The best case scenario for 2017 is for many good weather days to spread out the crowds," climber and mountaineering blogger Alan Arnette warned in a recent post.

"If it is like 2012 with four or even six (days) we can expect record deaths, record frostbite while seeing record summits –- a harsh scenario."

A photo of a huge traffic jam below the Everest summit in 2012 prompted calls for better crowd management on Everest, and even a cap on the number of permits issued annually.

But Ang Tsering Sherpa, the head of Nepal Mountaineering Association, said lessons had been learned from previous years.

"If there are too many climbers hoping to go up on the same date, we will try to schedule it in a way that won't cause a jam," he said.

This season has already seen its first death -- that of experienced Swiss mountaineer Ueli Steck who died on Sunday while on an acclimatization climb.

Last year five people lost their lives on the peak, while 443 successfully summited from the Nepal side and nearly 200 made it to the top from the north side in Tibet.