"It's dramatically dry earlier in the season," which typically would not begin experiencing such weather until January. 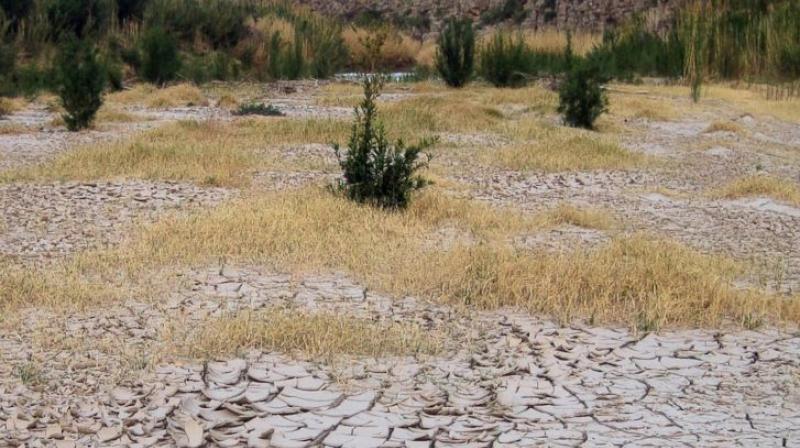 La Nina is a natural cooling of parts of the Pacific that alters weather patterns around the globe.

Conditions are ripe for winter wildfires from the mid-South through the Great Plains thanks to a combination of weather factors, including the climate phenomenon known as La Nina, that have left a lot of dry growth.

In addition to the La Nina, an occasional cooling of the equatorial Pacific Ocean that affects global weather and leaves the nation's midsection drier than normal in winter, a wet spring led to a heavy growth of vegetation that a mild summer didn't kill off. A dry November increased drought conditions in states including Oklahoma, Kansas, Arkansas, and Texas, said Oklahoma's state climatologist, Gary McManus.

McManus compared the potential scenario to that in March, when wildfires in northwestern Oklahoma, southwestern Kansas, and the Texas Panhandle scorched a total of more than 2,000 square miles (5180 sq. kilometers) left six people dead and killed thousands of head of livestock.

"What we see is this La Nina pattern, a cooling of the waters off the coast of South America, and what this means is above normal temperatures and below normal precipitation," most likely from December through February or early March, he said, adding that precipitation won't help dormant vegetation at this point.

"Even if we get rain and snow right now, it won't turn anything green," McManus said, noting that drought in the region is spreading and intensifying.

The latest US Drought Monitor map, released Thursday, shows extreme drought conditions in more than a dozen counties in western Arkansas and southeastern Oklahoma, where none existed a week earlier. Much of the remainder of the western half of Arkansas is in severe drought, as is south-eastern Oklahoma, northeastern Texas, in addition to northern Louisiana and parts of southern Missouri.

"We are kind of seeing the epicenter of this drought originate in western Arkansas and eastern Oklahoma and moving westward," potentially as far as New Mexico, according to Todd Lindley, science, and operations officer at the National Weather Service Forecast Office in Norman, Oklahoma.

In western Arkansas, fires in the Ouachita and the Ozark national forests began last week and burned a total of about 4 1/2 square miles (11 1/2 sq. kilometers), according to Tracy Farley, a spokeswoman for the two forests.

"It's dramatically dry earlier in the season," which typically would not begin experiencing such weather until January, Lindley said.

He said it's very similar to the weather pattern last year that created the conditions for the large wildfires that began March 6 in northwestern Oklahoma because of downed power lines and eventually burned for more than a week, charring more than 1,200 square miles (3,100 sq. kilometers) in Oklahoma and southwestern Kansas.

Stanley Barby, who owns Bar B Ranch near Beaver in the Oklahoma Panhandle, said the fires burned 33,000 acres (13,355 hectares) of his 50,000-acre (20235-hectare) ranch. He said the ranch is still recovering from the loss of pastures, fences, barns, three houses and some cattle, and that there is no way to prepare for such an event - just hope it doesn't happen again.

"Mother Nature controls it, you just take it one day at a time, that's just a part of being a rancher and a farmer ... we just accept it," Barby said, "We just pray for a break, 'Mother Nature gives us a break,' that's all we can do."

But fires begin in multiple states, he said, those resources will be difficult to obtain for every state involved.

"It will start to be tough because other states as they start to experience fire occurrences, then bringing people from (other states) will be harder and harder," Goeller said.

Also, some states have reported drones flying above wildfires as aircraft attempt to drop water on the flames or are searching for or monitoring fires.
In Arkansas last week, a drone above a fire in northern Arkansas forced an aircraft that was monitoring the flames to divert.

Firefighting agencies will reroute or ground aircraft if a drone is seen because a collision with the device could cause the aircraft to crash.