Tattoos discovered on mummies after millennia under wraps

The mummies were unearthed 100 years ago in the Egyptian town of Gebelein, around 40 km (24 miles) south of modern-day Luxor. 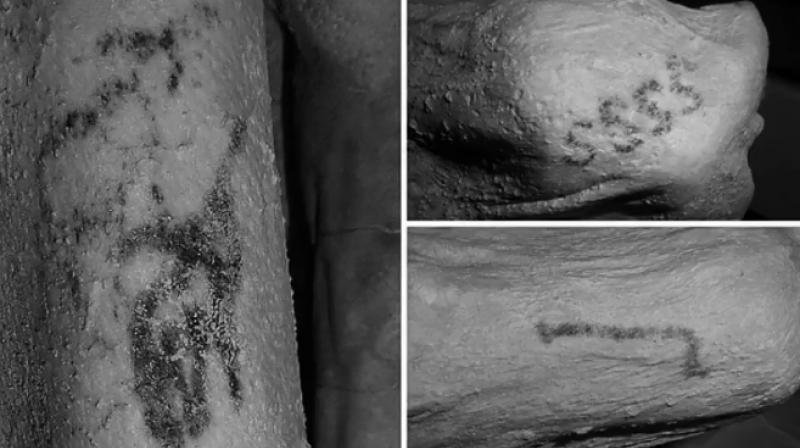 The artworks appeared as dark smudges in natural light but researchers at the British Museum and Oxford University’s Faculty of Oriental Studies found the tattoos in 2017 with infrared photography.

London: Researchers have discovered the oldest figurative tattoos in the world on the upper arms of two ancient Egyptian mummies, the British Museum said on Thursday.

A male mummy was found to have tattoos depicting a wild bull and a Barbary sheep on its upper arm, while a female has linear and S-shaped motifs on its upper arm and shoulder.

The artworks appeared as dark smudges in natural light but researchers at the British Museum and Oxford University’s Faculty of Oriental Studies found the tattoos in 2017 with infrared photography.

“It’s actually providing completely new insights into the use of tattooing,” Daniel Antoine, curator of physical anthropology at the British Museum, told Reuters.

“The location of these tattoos suggests they were designed to be highly visible on the upper arm and the shoulder,” he said, adding that the discoveries push back by 1,000 years evidence for tattooing in Africa.

The mummies were unearthed 100 years ago in the Egyptian town of Gebelein, around 40 km (24 miles) south of modern-day Luxor. They date to 3351 to 3017 BC, which is the Predynatic period before Egypt was unified by the first Pharaoh.

Researchers said the female tattoos may have denoted status, bravery or magical knowledge, while the male’s were likely symbols of virility and strength.

Prior to the discovery, archaeologists believed tattooing in Egypt was only performed on women, as tattoos were only depicted on female figurines of the period.

The oldest surviving tattoos are geometric designs on a mummified corpse known as Otzi, who lived around 5,300 years ago and was discovered preserved in the Italian Alps in 1991.

The research, lead by Antoine and Oxford University’s Renee Friedman, was published in the Journal of Archaeological Science on March 1.