The scientist, who discovered the creature, said on Twitter that they will be calling it 'Dogor', which means 'friend' in Yakutian. 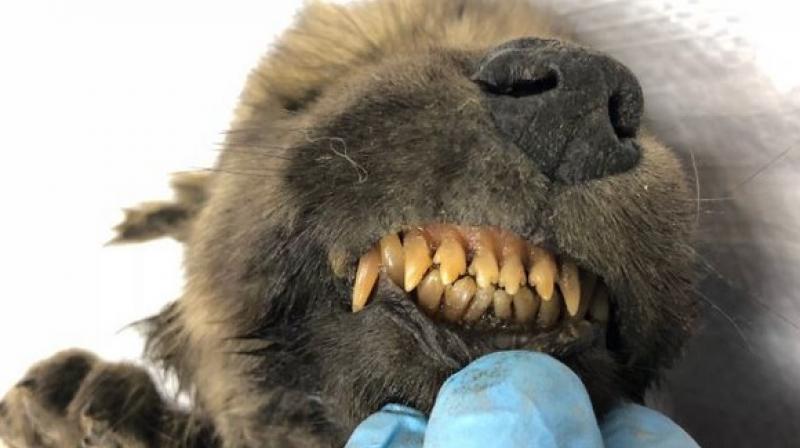 With his nose, fur and teeth totally intact, researchers in a baffling discovery have found a near-perfectly preserved puppy, which is 18,000 years old! (Photo: ANI)

With his nose, fur and teeth totally intact, researchers in a baffling discovery have found a near-perfectly preserved puppy, which is 18,000 years old!

The canine's discovery was made by Russian scientists near Yakutsk, in eastern Siberia and not only was he protected by the permafrost but his nose, fur and teeth were found to be totally in place.

Experts from Sweden's Centre for Palaeogenetics used carbon dating on the specimen's rib bone and confirmed that it had been frozen for around 18,000 years.

But extensive DNA tests conducted so far have been unable to show whether the discovered creature was a dog or a wolf.

"It's normally relatively easy to tell the difference between the two," David Stanton, a researcher at the Centre for Palaeogenetics, told CNN.

"We have a lot of data from it already, and with that amount of data, you'd expect to tell if it was one or the other. The fact that we can't suggest that it's from a population that was ancestral to both -- to dogs and wolves," he explained.

The researcher added that the period from which the puppy has been found to belong that it is "a very interesting time in terms of wolf and dog evolution."

"We don't know exactly when dogs were domesticated, but it may have been from about that time. We are interested in whether it is, in fact, a dog or a wolf, or perhaps it's something halfway between the two," he explained.

While it is thought that modern-day dogs have been domesticated from wolves but the time of their emergence is still not clear.

In 2017, a study published in the journal Nature Communications found that modern dogs were domesticated from a single population of wolves 20,000 to 40,000 years ago.

However, in contrast, a 2016 study at the University of Oxford, published in the journal Science, suggested that dogs were independently domesticated twice from grey wolves during the Paleolithic era, once in Asia and once in Europe.

The scientist, who discovered the 18,000-year-old creature, said on Twitter that they will be calling it 'Dogor', which means 'friend' in Yakutian.

In order to uncover more about the origin of the creature, scientists are planning to run more genome data tests.