Around 19,000 people have taken shelter in relief camps 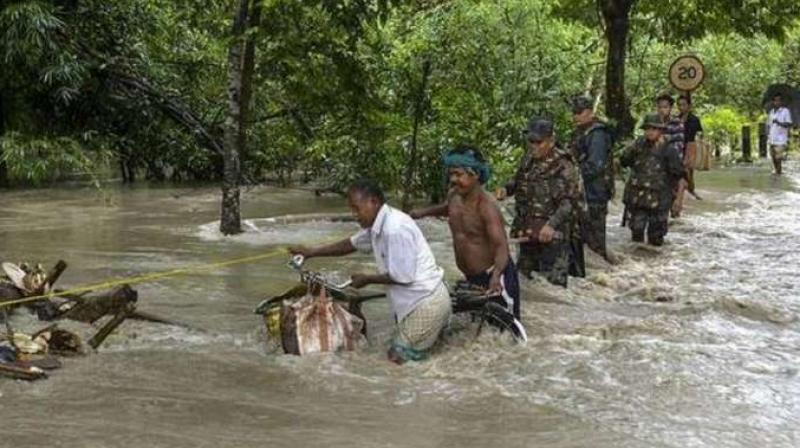 Guwahati: The flood situation in Assam deteriorated further on Saturday with heavy rains rocking the north-eastern states, affecting over 2.6 lakh people in 15 districts of Assam.

The mighty Brahmaputra, Puthimari and Dhansiri rivers are flowing above the danger level.

Informing that flood situation has worsened following the incessant rains for past few days, Assam chief secretary Kumar Sanjay Krishna told reporters that 90 relief camps have been set up across the state to provide succor to the flood-affected people.

The heavy rain has also caused landslides at various places blocking the vehicular movement on national highways. Mr Krishna said that PWD has been instructed to do the needful following the landslide at Raj Bhawan.

The arrangements have also been made to move people from the landslide-prone areas of the city, he added.

Assam chief minister Sarbananda Sonowal has also directed the Deputy Commissioners of all the affected districts to address the needs of the flood-hit people urgently, while also adhering to COVID-19 safety protocols.

The official said that in the current wave of floods, one person died in Dibrugarh district, while the first wave of floods from May 22 claimed 15 lives in different districts of Assam.

Meanwhile, state-owned Oil India Ltd (OIL) official said that due to the heavy rainfall during the past few days, Baghjan⁠ oil field where its leaking oil well caught fire⁠ and adjoining areas in Tinsukia district have been badly hit by floodwater. The accident site has been inundated, affecting the efforts to douse the blaze.

A massive fire broke out on June 9 at OIL's Baghjan oil well near the Dibru-Saikhowa National Park that had been spewing natural gas and oil condensates uncontrollably since May 27.