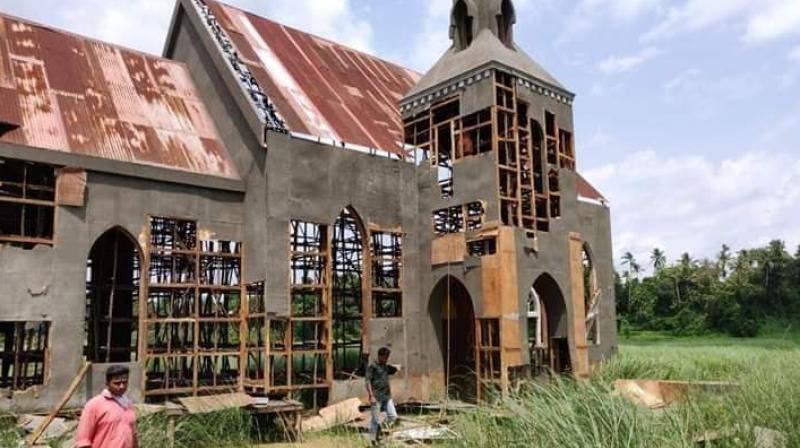 The film set that was destroyed

The first of its kind incident in Kerala, a big film set of the film ‘Minnal Murali’ starring Tovino Thomas has been vandalised allegedly by members of a Hindu right wing group.

The structure of a big church was erected for the film shoot on the banks of river Periyar in Kalady in the outskirts of Kochi. Shooting had to be stopped due to Covid 19 lockdown.

An activist of Antarrashtriya Hindu Parishad (AHP) put up pictures of demolishing the film set in Facebook and congratulated the Rashtriya Bajrang Dal activists for being part of the demolition mission. Few other members of right wing group have also shared the pictures in social media.

“When they set up a church structure in Kalady near the Mahadeva temple, we said no. We submitted complaints as well. We don’t have the habit of pleading and decided to demolish it,” the activist said in FB post.

The Perumbavoor police has registered an FIR and initiated an investigation into the incident.

Mollywood has expressed shock over the incident and protest is mounting from different sections of the society. Basil Joseph, director of the movie took to his social media page to express his disappointment.

“It was a dream project for us and I have been working for the project for last two years. We couldn’t complete the filming due to Covid lockdown. I never expected such a bad thing when the entire world is fighting against a global pandemic,” he said in Facebook post.

Meanwhile, Chief minister Pinarayi Vijayan said that strict action would be taken against those who are behind the incident.

Shashi Tharoor MP tweeted, “Vandals with no respect for private property, let alone for religion, should be prosecuted and fined”.

Actor Tovino Thomas, hero of the movie strongly reacted to the incident. “As we were about to start shooting in this set which was built on a considerable cost, the country went into lockdown, following which the shoot was paused, just like all others. It is during this prevailing uncertainty that this contractual set was destroyed by a group of racialists yesterday. The reasons they cite for this unceremonious act are not understood to our senses till now. We’ve heard of movie sets being vandalised by religious fanatics in Northern parts of India. Now, it’s happening to us right here,” he said in FB page.