Mizoram removes dogs from category of animals for slaughter

NGOs lobby for ban on consumption of dog meat 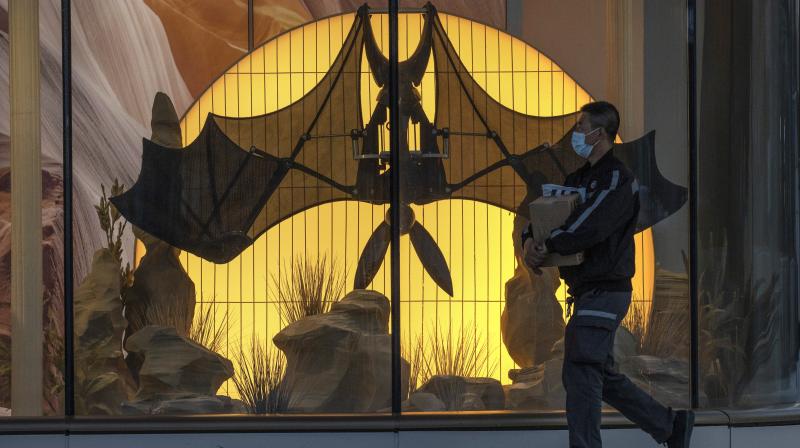 A man wearing a mask walks past a mechanical bat displayed at a mall in Beijing on March 15, 2020. Scientists have not yet determined exactly how the new coronavirus first infected people. Early evidence suggesting it originated in bats or other wild animals have resulted in calls for stricter regulation of the wildlife trade in China. (AP)

Guwahati: While the world is facing a pandemic believed to have been caused by the trade in wild animals like the bat for consumption, Mizoram has taken the lead to end the trade in dog meat by amending a law to remove dogs from the definition of animals suitable for slaughter.

The Mizoram Assembly amended the law by passing the Animal Slaughter Bill 2020 unanimously.

Consumption of dogs is also prohibited under India’s food safety regulations. However, this is poorly enforced in Mizoram. Thousands of dogs each year are illegally captured from streets or stolen from their homes, stuffed into gunny bags with their mouth stitched or tied, and transported over many days to Mizoram and Nagaland.

Informing that there have been reports of dogs being transported from neighboring countries such as Myanmar and Bangladesh, the NGO Humane Society International, India, said the cruel transport and slaughter of dogs violates several provisions of the Prevention of Cruelty to Animals Act, 1960, the Indian Penal Code, and Food Safety and Standard Authority (FSSAI) regulations.

Humane Society International-India has been working to end the trade in dog meat in Mizoram since 2016.

“This is a very welcome and much-needed move by the Mizoram Legislative Assembly. We hope that this law will end dog slaughter in Mizoram, but in order to shut down the trade completely, we urge the state government to ban the sale and consumption of dog meat too,” said Alokparna Sengupta, managing director of the NGO.

The NGO claimed that 30 million dogs and 10 million cats a year are killed across Asia for human consumption, with the trade most widespread in China, South Korea, Indonesia, Cambodia, Laos, Viet Nam and parts of northern India.