Police to charge Australia-returned man who wandered around in Mysuru

Cops to throw three sections of IPC at him 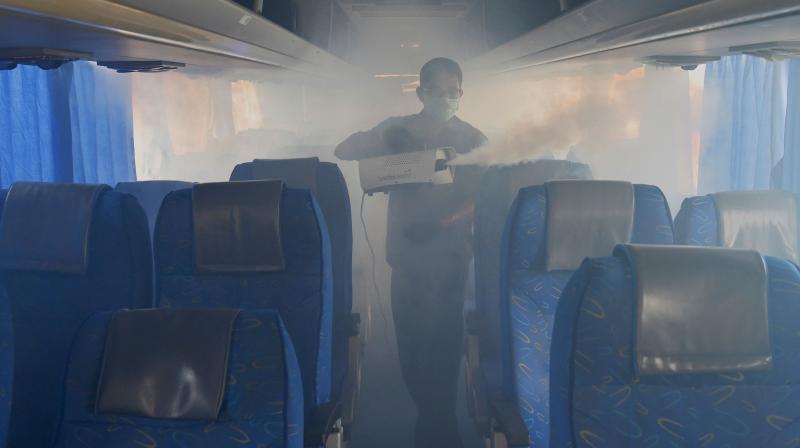 A worker disinfects a Karnataka public transport bus to contain the coronavirus. (PRI)

Mysuru: An Australia-returned person created panic in the VV Puram area of Mysuru by jumping quarantine and roaming around freely.

The person had returned from Australia on the 22nd of this month through the Kempegowda International Airport, Bengaluru. He had a quarantine seal put on his hand by the airport authorities. The Health and Family Welfare Department had ordered 14 days home isolation till April 6.

However, the person reportedly violated the order and went out of home and moved about in public places despite being aware of the government order and the fact that he had returned from a Covid-19 hit country.

Also, the Mysuru District Journalists’ Association has decided not to allow press meets on its premises and have closed their office. And regional office of all newspapers in Mysuru have decided to work from home.

Mysuru DCP Prakash Gowda said the police can book criminal cases against people who are negligent about the coronavirus protocol and violate government orders under IPC sections 188, 270 and 271, which entail imprisonment of two years and IPC 269 which may amount to imprisonment of six months.

Meanwhile, three Germans who were quarantined in a resort in Kodagu are being discharged after they completed their 14-day quarantine period. Currently one of them had come from Abu Dhabi and one from USA are still quarantined in resorts in Kodagu.

Another case in Kodagu is a 35 year old man who had come from Dubai and came into contact with a total of 498 people. Samples have been taken from 20 of them, and sent for testing.