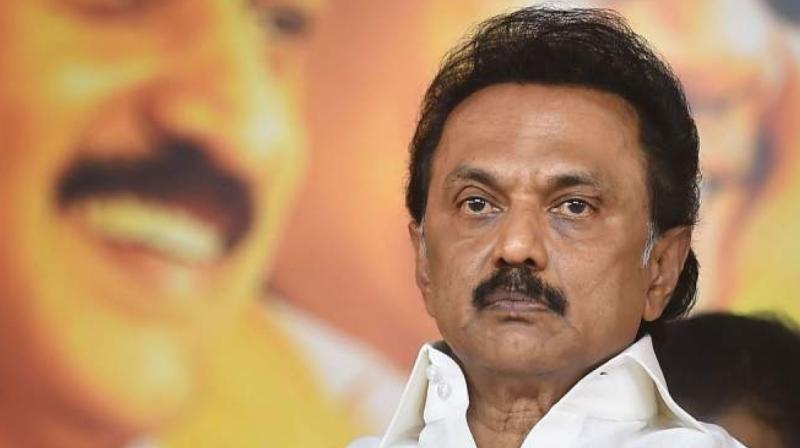 Chennai: Another row over Hindi has erupted in Tamil Nadu with the DMK alleging yoga and naturopathy practitioners from the state were asked to leave a virtualmeet held by the AYUSH department if they did not understand the language and seeking action against officials concerned.

It comes close on the heels of Kanimozhi's recent claim that a Central Industrial Security Force (CISF) Personnel had asked her if she was an Indian as she could not speak Hindi, which brought back the debate on "Hindi imposition".

Stalin, in a statement, alleged Ayush secretary Rajesh Kotecha with "arrogance and a chauvinism for Hindi intimidated 37 yoga and naturopathy physicians to leave an online training session if they did not know Hindi" and condemned it.

"It is shameful that a senior government official in the rank of secretary has behaved in such an uncivilised fashion prompted by linguistic chauvinism," Stalin said on Saturday.

He urged Prime Minister Narendra Modi to ensure that such an incident did not recur and asked Chief Minister K Palaniswami to exert pressure on Modi to conduct the Central government's training programmes and meetings only in English.

"The BJP government at the Centre is continuously working by thrusting Hindi as its first agenda," and slighting other languages, particularly the classical Tamil, he alleged.

The AYUSH official would not have behaved in such a manner if prompt action had been taken against the CISF official for 'questioning' his sister and MP Kanimozhi for not knowing Hindi at the airport, he said.

Kanimozhi had alleged a woman CISF official who interacted with her on August 9 at the airport here asked her if she was an Indian as she did not speak in Hindi.

The CISF officials later maintained the woman officer "had not uttered" the words as alleged by the DMK MP but just said "Hindi is also an Indian or official language".

They also had said the force would take "enhanced efforts" to deploy more personnel who know the local language.

Stalin said when the remarks of officials, one after the other was examined, it "exposed the BJP-government's agenda of imposing Hindi" through them. Also, the Centre's declaration that no language would be imposed vis-a-vis the National Education Policy is an "eyewash" and this has become clear, he said.

Kanimozhi, in a letter to Naik, said the AYUSH secretary addressed the meet in Hindi and demanded an inquiry and action against "all officials who have acted in a manner discriminating (against) our fellow citizens on the basis of language."

She wanted the Minister to direct officials in his ministry to communicate in English in all official events and wherever Hindi was used, English translation should be provided.

"Further, I would like to remind you about the promise made by the then Prime Minister Jawaharlal Nehru on 7th August 1959 on the floor of Lok Sabha that as long as the non-Hindi speaking states require English as an associate language, it will continue for an indefinite period," she said.