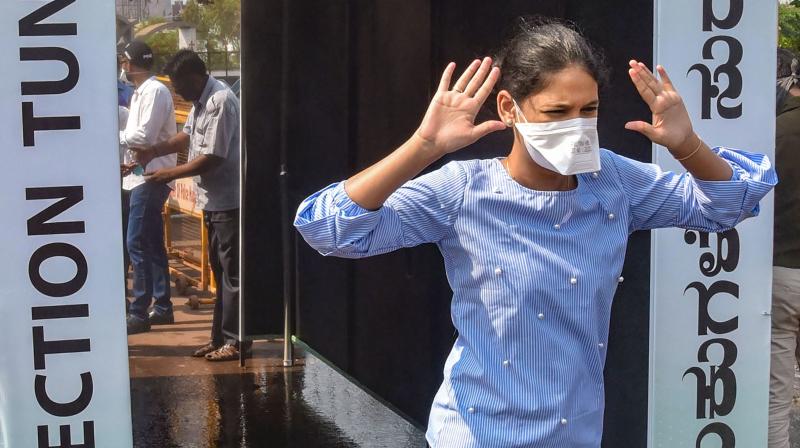 A woman comes out of a walk-through disinfectant tunnel set up at the APMC market in Hubballi district of Karnataka. (PTI)

Hubballi: A 27-year-old constable has become the first policeman to be infected with the coronavirus while on duty in Karnataka. The constable was deployed at a madrasa in Mudhol town in Bagalkot district where a youth from the seminary had tested positive for the virus last month after returning from the Tablighi Jamaat congregation at Nizamuddin in Delhi.

Health officials have kept the constable in quarantine for the past four days after he developed a cough, fever and other virus-related symptoms.

Frontline health workers including doctors and nurses have tested corona positive in Karnataka since the outbreak of the virus.

The constable was deployed to a security detail at the madrasa on March 27 when police resorted to a lathi-charge when their efforts to stop people from gathering for prayers were resisted.

The constable’s positive test has caused panic among police officials. The district administration has kept personnel who had come into contact with the constable under keen observation.

The total number of coronavirus cases has increased to 14 in Bagalkot district with two more reported on Wednesday. Two cases have been reported in Vijayapur district.