After weeks of seeming to subside, pandemic seems to be gaining momentum again 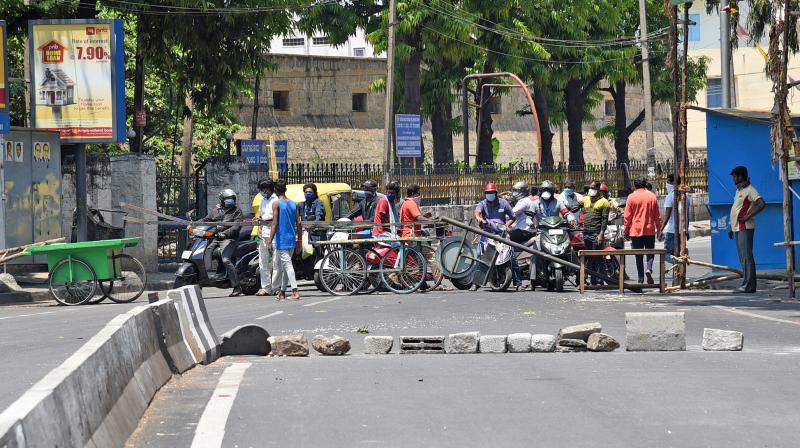 With the Covid-19 epidemic showing signs of acceleration, roads leading into infection hot-spots, such as this one at the Banashankari temple, have been sealed off. (DC Photo: Satish B.)

Bengaluru: Karnataka reported its 12th Covid-19 death amid signs that the pandemic is building up a head of steam after seeming to have lain quiet in this southern Indian state for a few weeks.

The death toll now is up to 12, and the evening bulletin issued by the Department of Health and Family Welfare Services showed that 19 new positives were added to the state's case burden, taking the total to 279.

This was the highest addition within a 24-hour period since Karnataka recorded the first coronapositive case on March 9. Karnataka was also the first state in India to record a death due to Covid-19 but since then the anticipated acceleration did not come, giving a ray of hope to the health authorities here.

But the spurt seen in the last 24 hours, the indicates that the epidemic is beginning to build momentum as also seen in similar spurts in the neighbouring states of Telangana and Tamil Nadu.

The two deaths reported today included a 65-year-old male patient from Chikkaballapur, and an 80-year-old woman from Hirebagevadi in Belagavi district. The elderly lady is said to have been infected by contact with a 38-year-old male who himself got infected from a corona positive patient who had a travel history to New Delhi.