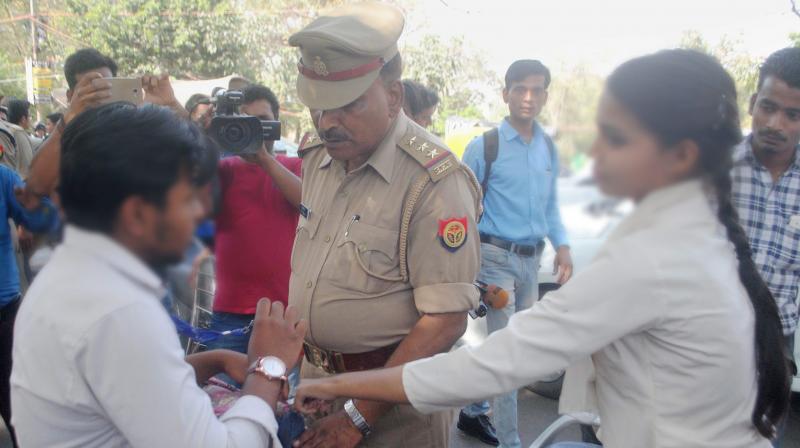 Anti-Romeo squad of police hauls up a youth in Lucknow. (Photo: PTI)

The “anti-Romeo” squad is a semi-government vigilante group in Uttar Pradesh to protect women. However, what are they actually doing? From television reportage it appears that vigilante groups from so-called “Hindu” organisations are searching streets, parks, etc. and apprehending couples. They are supposedly saving women from the evil designs of the men around them without any call for support from women.

These squads are acting like kangaroo courts, which evoke public support on a sensitive issue such as protecting women, the hypocrisy of the same men at home, or in their own lives, notwithstanding. It is based on a dangerous assumption that every female with a male is unsafe.

These squads are not offering help, albeit imposing it. They are not preventing or punishing any legally articulated crime. So when they see a couple, it doesn’t matter whether something was happening or not, their mere togetherness is polluting society, hence it’s a crime! The humiliation heaped to prove that the relationship is benign is to signal an undeclared ban, imposed by violence against such acultural actions.

For these squads do not intervene at a hint or suspicion of trouble, they intervene at the hint of “cultural pollution”, when a girl and a boy are together in public. It is anti-women, feudal and patriarchal. This is the “Indian Taliban”.

The squad does not prevent a crime from happening or report it. It turns the idea of law and order administration on its head — whether the crime is committed or not, both the alleged perpetrator and the alleged victim have to prove that crime was not committed. The “anti-Romeo” squads are somewhat like the famed encounter squads that roam in our cities. The encounter squads eliminate suspected or known mafia and these squads turn mere association of two genders into a viable space for their encounter!

The obvious then is happening. Police squads are turning into harassment and extortion rackets, as happens in all parks and corners of India — where boys and girls come together. The vigilante groups, drawn from the pathetic boys who member organisations like the Bajrang Dal, now have a new avenue of “goonda-ism” and extortion in the name of religion and cultural purity. These goonda groups shall now roam the streets preventing crimes that are not happening.

The atmosphere that these squads create pushes society once again into dark times, where sexes should be segregated, where women are treated as symbols of honour, and have to adhere to orthodox cultural norms of good and dignified behaviour. It is this very atmosphere that breeds patriarchal notions of women, which promotes violent crimes against women, both at home and outside.

If anyone believes that, except momentarily, harassment of women and violent crimes against them shall reduce is in a fool’s paradise. I say this with full confidence that neither harassment nor serious crimes against women in the long run will decline. The progress in last few years of women taking their place of equality in society, and doing what they wish, including social interaction, will regress, pushing them into the purdah of patriarchal and uniformed closets.

A move to ensure safety of girls: Aditya Jha

The poor, if not abysmal, state of law and order in Uttar Pradesh has dominated media headlines for years, and to address this problem head-on, the recently-installed BJP government announced the establishment of anti-Romeo squads to curb cases of eve-teasing and molestation. This initiative, a promise made by the BJP top brass during the Assembly campaign, has attracted both praise and criticism, but by and large has been welcomed.

Are these anti-Romeo squads good for society, both in the short and long term? Yes, say a majority of women. Some of them are actually quite pleased by its introduction, claiming that they do feel safer with the frequency of police patrolling.

In the recent past, we heard reports of bike-riding boys blocking the path of women, or touching them inappropriately, as they walked down the streets, but no action was taken. Now, it seems, women and girls are more self-confident, reassured and less fearful about moving out alone at any time of the day.

Cases of eve-teasing or stalking in the state have reportedly come down and senior police officers in the state are unanimously of the view that the presence of anti-Romeo squads has left a visible impact among people.

Several people appreciate this action and claim that due to this action the state also improved in controlling crimes against women. Most don’t agree with the view that this is moral policing in a different garb, but maintain that the police should target only those breaking the law.

The state government has instructed senior law enforcement officials to issue clear guidelines to these anti-Romeo squads to ensure both fair assessment and action. It has been made clear that no action should be taken by the police if boys and girls are consensually hanging out together.

Police teams comprising of males and females move around schools, colleges and markets. These squads are expected to monitor activities of men in areas and at events where the presence of girls is large in number. If a man is caught eve-teasing or passing lewd comments, the police will call his parents and give a warning. If the nature of the crime is serious, the person will be booked.

The police say that they are experienced enough to identify Romeos by just looking into their eyes, faces, or the way they stand.

That women students are harassed is a harsh reality and the Uttar Pradesh government’s decision to give official sanction to these anti-Romeo squads is aimed at making the police force more accountable and preventing them from violating human rights in the name of ensuring the safety of women.

The media is observing every action of these anti-Romeo squads, which will eventually force the police to act within the ambit of the law.

The presence of the police at places where women easily become prey to eve-teasers will make a difference.

The concept of anti-Romeo squads is not new to India. Gujarat had such squads in the late 1990s for about two or three years. Various state police administrations have also taken efforts to check eve-teasing.

No one can deny that the intention is in the right place, and the drive should not be seen as an act of moral policing, but as a move to ensure the safety of women.

The writer is a Delhi BJP leader