More autonomy for Kashmir within the Constitution's parameters is still a workable idea. 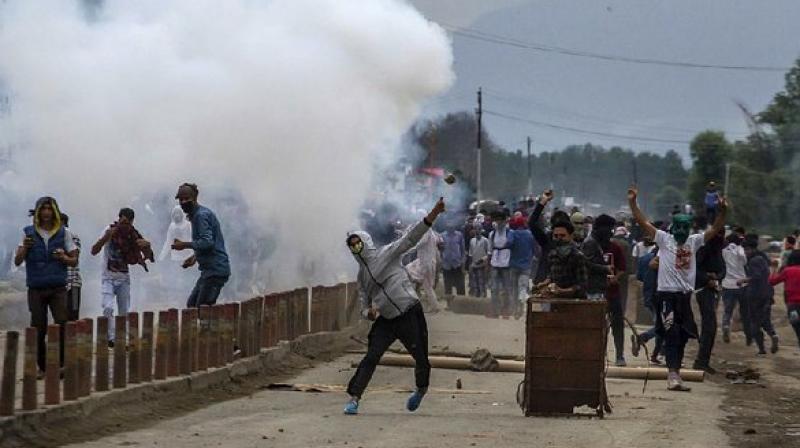 Kashmiri demonstrators throw stones at the police during a protest on the outskirts of Srinagar. (Photo: AP)

In these seemingly hard times for its people, it is imperative to address the essential political question of Kashmir as their dignity and security are attached to it. The fundamental problem in Kashmir is of political nature, rooted in the political aspirations of its people who have been a victim of broken promises. There was, and continues to be, a genuine aspiration for political autonomy which is also guaranteed by the Indian Constitution.

As a solution, greater political autonomy for the state of J&K still holds relevance because there is an aspiration for a change in the status quo. Barring some isolated sections, there is also a strong realisation among the people that their future still lies within the Indian republic as it was in 1947, but of course with the assurance that its distinct political identity will be safeguarded.

Given the exceptional circumstances of 1947 and the prevailing situation, only a middle ground solution appears tenable. And that inevitably is the issue of greater autonomy to the state of J&K. But first and foremost, there has to be an acknowledgement and realisation that the state of J&K acceded to India (it didn’t merge) in the most unique circumstances based on certain constitutional guarantees and also the acceptance of the fact that the constitutional promises made to the people of the state have not been fulfilled. Instead, a gradual erosion of the state’s special status and political autonomy as envisaged in Article 370 of the Indian Constitution has taken place.

The dream of sharing a common social and cultural life across the Line of Control is closely tied to the political aspirations and hopes of struggling Kashmiris. It is also a fact that the settlement of the political problem cannot be restricted to J&K alone. It has to be extended to the part of J&K under Pakistan occupation as well. In this milieu, the formula of greater autonomy to the two divided regions together with the concept of shared sovereignty could be explored in a serious way. It will not lead to a redrawing of the territorial borders, which both countries are not going to accept given the prevailing geostrategic circumstances. Another important factor to be taken into account with this solution is to cater to the aspirations of sub-regional groups for autonomy in their own sub-regions and to account for the enormous regional, cultural and religious diversity within the state. In other words, one is proposing a set of local self-governments for these various sub-regions within the state. Finally, political measures have to be accompanied by serious steps for economic emancipation and that means a comprehensive programme for economic development for repairing the social fissures, dignified rehabilitation of people, especially Kashmiri Pandits who have been evicted from their ancestral homes and properties, and compensation for families that have suffered at the hands of either the militants or the government forces or in the cross-border shelling.

This proposed way forward could potentially lead to the settlement of the issue. But these can only be materialised once an environment for an extensive democratic dialogue is created in the region. But even before that, durable peace between India and Pakistan is the first condition and necessity.

Autonomy is not a solution to the Kashmir problem, and there can be no argument over this issue. Autonomy necessarily is a framework of constitutional guarantees given to Kashmiris at the time of signing of the temporary “Instrument of Accession” by the then Maharaja. These guarantees were, however, eroded, rather ruthlessly snatched by New Delhi from time to time; thus weakening its own stand on the “Instrument of Accession”. Kashmiris have been making sacrifices for a long time, fundamentally for seeking implementation of the UN resolutions.

The entire state of J&K, including Gilgit-Baltistan and Pakistan-occupied Kashmir (PoK), was a disputed territory even when autonomy in J&K was intact. Even if it is restored in its original form now, it cannot resolve the 70-year-old dispute. The possibility of granting more autonomy could have been discussed with stakeholders in pre-1989 era, not now. The peaceful movement seeking a resolution to the Kashmir problem was replaced by an armed struggle in 1989, and in the last three decades, over 100,000 people have lost their lives, shrinking the scope of reconciliation.

If you try to sell this idea to a Kashmiri, the question he would ask you is —  if autonomy could be the final resolution, what was the need of making so many sacrifices, virtually  destroy Kashmir and hold the whole subcontinent hostage? Those pleading for restoration of autonomy could have got it either at the time of the Indira-Abdullah accord of 1975, or when the Farooq Abdullah-led NC contested elections against the wishes of masses in 1996. Dr Adbullah missed the golden chance by not putting restoration of autonomy as a precondition for joining the fray. The same was done by the PDP with its so-called “self-rule” formula. Even New Delhi has never been sincere in finding a solution to this problem. It successfully used both the NC and the PDP to create confusion and divide the opinion of people by talking about the possibility of a resolution within the ambit of the Indian Constitution. Such talk was also aimed at weakening an internationally-recognised dispute. Let us not forget that J&K is disputed only because it continues to be on the UN agenda. Once the relevant UN Security Council resolutions are taken off, J&K will be known by the world as being an integral part — good or bad — of Pakistan or India just like Rajasthan and UP or Sindh and Punjab. If Kashmiris decide, through a plebiscite, to be a part of India, then not only this part of Kashmir but Gilgit-Baltistan and PoK too will become India’s integral part. In such a scenario, Article 370 will have to go and the Parliament resolution claiming the entire J&K as being India’s integral part will get automatically implemented.

Restoring autonomy would mean surrendering PoK and Gilgit-Baltistan to Pakistan. Even PM Narendra Modi has claimed that the people of PoK and Gilgit-Baltistan want to be a part of India; it is only five per cent people of the Valley who seek separation from India. Why is the government scared of allowing implementation of the UN resolutions? Let me make it emphatically clear that there are no takers for autonomy. Also, autonomy would mean maintaining and managing the status quo, rather having a lasting, peaceful solution.