The BJP’s lack of a CM candidate will not hurt its prospects in the UP election. 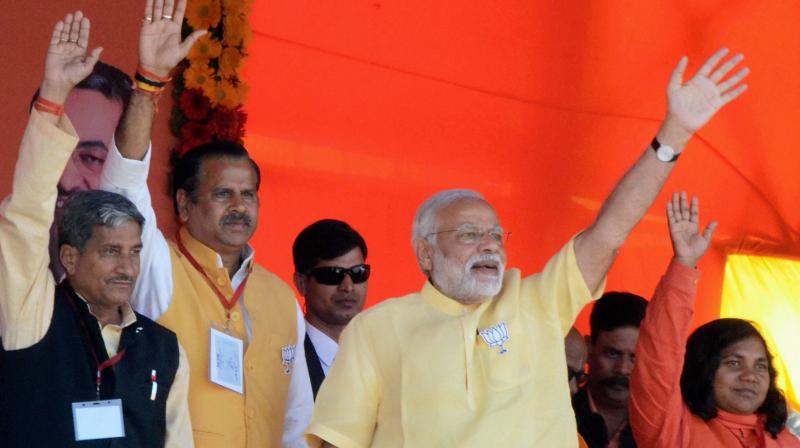 It has left the decision to elected MLAs: Praveen S. Kapoor
The BJP has gone into the Uttar Pradesh Assembly elections without a chief ministerial face. In a state where both major opponents are chief ministerial faces, the BJP’s decision may appear strange but it has its own advantage. The party has fought and won the states of Haryana and Jharkhand without projecting a face while in Delhi and Assam, where the party projected a face, it had a mixed experience.

In the light of varied experiences we have to understand that the BJP leadership treats the issue of projecting a chief ministerial face on the basis of political circumstances in the state concerned and, above all, raising a winability campaign is the prime concern.

The present election in UP is being fought with the BJP soliciting votes for the state’s development with the Centre’s support. Prime Minister Narendra Modi has all through his massive campaign assured the voters of UP that he owes his power to the support they gave him in 2014, hence now he wants to work for the betterment of their lives.

The people of UP have suffered a lot during the last two decades; they are realising that they need to fast track the development of their state which lags behind almost all major states in educational, industrial or job opportunities.

For the last two decades people have voted for the face-oriented leadership of Mulayam-Mayawati-Akhilesh, but every time they have been denied their rightful share in the nation’s growth. The voter now wants development and understands this is not possible without Central assistance. The voter of UP has risen above politics of caste and creed. Today there is one-to-one connection between the voters of UP and the Prime Minister. The same is being reflected in every political rally Mr Modi, Amit Shah or any of the senior leaders of UP like Mahesh Sharma, Yogi Adityanath, Maneka Gandhi, Smriti Irani have addressed. The quest for development can be seen in every eye.

The BJP has a strong line of leaders in UP and today under the command of Mr Shah they are fighting like soldiers to win freedom for the people of the state from the politics of scams, corruption and casteism spread by Ms Mayawati and Mr Mulayam Singh Yadav.

The strategy of the BJP leadership to not to project a face and fight as a party proved to be a success even before the election process started with the ruling SP entering into a coalition with the Congress. The two parties have been sworn enemies and their need to survive forced them to come together. While on the other hand recent reports of Ms Mayawati asking her core voters to transfer votes to the BJP, if need be, to defeat the SP speaks volumes. It seems she too realises which way the wind is blowing.

By not nominating a CM face, the BJP leadership has left the issue for elected MLAs. So today all local stalwarts of UP are working hard to ensure the victory of party candidates. At a time when the face-oriented parties of Mulayam Singh Yadav and Ms Mayawati or even Rahul Gandhi are facing dissident problems, the BJP is strongly marching towards victory. Hats off to the BJP leadership for taking the right decision.
The writer is the media in-charge of the Delhi BJP

It’s a major handicap for the BJP: Vipul Maheshwari
The BJP is in the habit of hoodwinking people. The Prime Minister is coming to Uttar Pradesh and telling people that he will develop the state. Unfortunately, he does not tell people who will be the chief minister if at all the BJP comes to power, though that seems impossible. But the people of the state have a right to know whether it will be Yogi Adityanathji, Kalraj Mishraji, Murli Manohar Joshiji or Rajnath Singhji. The BJP as a party exhorts the values of transparency — we would be grateful if they can practice what they preach.

Local issues require local leaders to solve problems. Narendra Modiji is certainly not the chief minister face of the BJP. If you look at the BJP, they have not announced a chief ministerial candidate in Uttarakhand and Goa too. This is becoming a habit with this party. But now times have changed, the electorate needs to vote on a face. This will severely hamper its chances in all the states that have gone to the polls. In UP, when we were contesting alone, we had named Sheila Dikshitji as chief ministerial candidate. So when the alliance took place, Sheilaji herself stepped down and Akhilesh Yadav became the alliance candidate.

The strategy of contesting the elections in Mr Modi’s name and then airdropping a leader without much mass appeal, like the BJP employed successfully in Haryana, Maharashtra and Jharkhand, will not work in a state as complex and vital as UP. It’s a major handicap for the BJP. After all the BJP fought and won the election in Assam last year with Sarbananda Sonowal at the forefront. Whatever the talk of development by the BJP, it would require a credible personality so that people vote for him. Unfortunately, the BJP doesn’t have anyone to show, not because of a policy decision but because it has no one to project. The fear of infighting and sabotage also prevails very heavily on the minds of the top BJP leadership. To counter any sabotage, it is taking its leaders and also the people of the state for a ride.

As the BJP has not offered a chief ministerial face and is riding on the personality of the Prime Minister and its national leaders, it will have to face Central anti-incumbency. It is close to three years now since Mr Modi became Prime Minister and also a Lok Sabha member of Parliament from Varanasi. What has changed? What is it that the PM has brought to the table for the state which elected him to the Lok Sabha?

There has been no employment generation, which was made a poll issue by the BJP in the Lok Sabha elections. The youth is upset, the farmers are upset as the proper price for their produce is not available. These are issues which the Centre will have to answer. Look at the price of petrol and diesel, and look at the international crude oil prices. International prices have come down, but domestic prices have not.

The people of the state have seen the jumlas of the BJP. They now know and understand that under the Central leadership of the BJP there can only be pain and trouble for the common man. Now with no chief ministerial candidate to bank on, the party will certainly take a hit.
The writer is a lawyer and treasurer of the UP Congress Committee