Congress has a long way to go before it can turn 2019 into a Mahabharat. 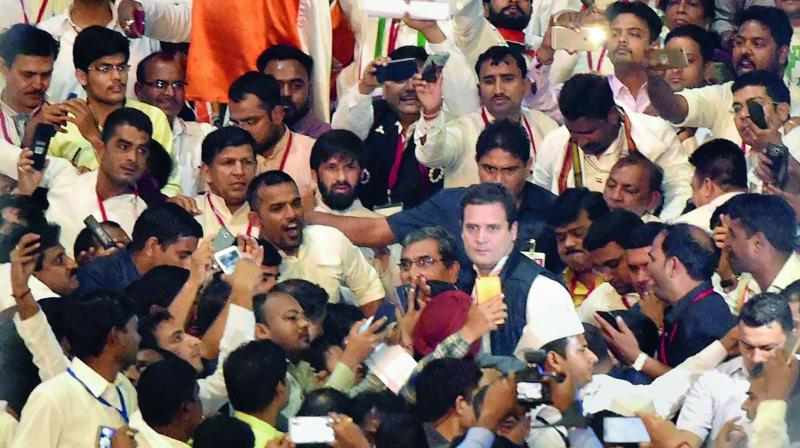 Cong has no concrete stragety
Harish Khurana
In his 50-minute speech at the Congress’ 84th plenary session, party president Rahul Gandhi pledged to break the twin walls between party leaders and workers to revitalise the 133-year-old party and said the 2019 general elections would be a fight between “truth and lies”. He compared the BJP and the Rashtriya Swayamsevak Sangh (RSS) to Kauravas who were “designated for power” and Congress to the “Pandavas” who “lost everything but fought for truth”.

Now, this is a “stale rhetoric” which has been “rejected repeatedly” by the people. The Congress developed this overconfidence after we lost the Gorakhpur and Phulpur seats in the byelections in Uttar Pradesh. The Congress is behaving as though it won these seats by a huge margin while the fact is the party lost its deposit in these elections. Phulpur was once a Congress bastion — none other than the country’s first Prime Minister Jawaharlal Nehru was elected to the Lok Sabha thrice from this constituency. After him, his sister Vijaylakshmi Pandit represented the constituency.

The Congress’ performance in the states is going down by the day after the BJP came to power in 2014. They have lost all elections except Punjab. In Tripura, they couldn’t even open their tally. The dismal performance of the Congress raises questions about the party’s strategy ahead of the 2019 general election. Will it be able to lead the United Progressive Alliance (UPA) as in the past? UPA chairperson Sonia Gandhi, by hosting a dinner for the leaders of the Opposition and non-NDA parties on the evening of March 13, tried to send a subtle message of strengthening of the UPA by bringing together anti-Narendra Modi forces.

But whether the Congress is in a position to lead the new coalition — if at all it takes shape under the UPA umbrella — is a big question.

The problem with the Congress is whether the prospective allies of the UPA will accept Mr Gandhi’s leadership or not. None of the leaders who attended Mrs Gandhi’s dinner has given a clear answer about their acceptance of Mr Gandhi as the UPA leader.

The Congress has performed miserably so far, be it the state elections or the Lok Sabha polls. As things stand today, each Opposition party has a single-point agenda and that is to counter and stop the Modi juggernaut. The Modi-Amit Shah duo has been winning one state after the other and to counter this, the Opposition needs a very strong leader.

We at the BJP feel that the Congress needs to have a concrete strategy to achieve its goal. As of now, it looks more like a confused party, more so when it comes to allying with other parties at the state level. It has to realise its strengths and weaknesses and work out a plan for the future.

Another task for the Congress is to revamp itself by strengthening its grassroots connectivity. Mr Gandhi himself stated that he wants to break the wall between leaders and people.

The BJP is way ahead when it comes to reaching out to the last man standing. The party has benefitted immensely from the strong grassroots connectivity of its ideological mentor, the RSS.

Moreover, the Congress also has to ensure that no conflict, leading to dissent, takes place between the old guard and the young blood when it comes to contesting an election. As of now, there is a lot of infighting in the party and Mr Gandhi’s failure to stop this is another cause of worry to his party as well as UPA allies. The Congress has to put its own house in order first and they don’t have much time for it for the 2019 elections. I feel, they must think of the 2024 elections, not 2019.
The writer is spokesperson of the Delhi BJP

BJP has failed on all fronts
Ashish Dua
The assertion is misplaced. The battle has already begun; inch by inch, seat by seat, the Congress is clawing back and giving the BJP a tough time. The reasons are basic and simple. If we look at the overall situation prevailing in the country, all the indices are going down.

The anti-farmer mindset of the BJP stands exposed as agricultural growth under the NDA II (2014-18) has fallen to half of the growth levels achieved during the UPA government, headed by Dr Manmohan Singh. As a political party, we share the anguish of the farmer for the government's neglect of the farm sector as minimum selling price (MSP) is not keeping pace with rising prices. In some parts of the country, the existing government policies have forced farmers to sell their produce below the MSP. The government has failed to deliver on its lofty promises; it is duping farmers by making empty noises of doubling farm incomes by 2022. The crop insurance scheme introduced by the government has benefited private insurance companies more than the farmers as money is taken away from the bank accounts of the farmers without their consent.

The economic situation of the country is serious as there are no jobs. Every single day, 30,000 youths enter the job market looking for a job, and only 450 get one. Instead of crafting policies that will create jobs, the Narendra Modi government has chosen to live in denial of this issue, hiding behind a facade of compromised research claiming that the economy generates more formal sector jobs than any other country in the world.
The abysmal economic management of the Modi government has resulted in lack of jobs for millions of youth, stagnant real incomes for hundreds of millions of farmers, collapse of the manufacturing sector, destruction of micro, small and medium businesses, paralysis of India's banking sector, a severe dent in business confidence and rising inflation expectations of households.

There is a big philosophical difference in our economic vision and that of the BJP. The Congress believes in the twin goals of inclusive economic growth thr ough private enterprise, a competitive and viable public sector and a robust social safety net through a strong welfare state.The BJP believes in a coercive economic regime that favours a few, a trickle-down effect for the middle class, leaving the very poor to fend for themselves.

The BJP’s economic philosophy is blind to India’s size, scale and diversity and rests on an artificial principle of “oneness”. The Co ngress Party’seconomic vision recognises India's plural, federal structure that is opposed to the imposition of a“one nation, one policy” doctrine.

A failed demonetisation, flawed GST and a paralysed banking system have been the economic hallmarks of the four-year rule of the BJP. Carried away by its own propaganda, the government has mismanaged India's relations with major partner countries. Its foreign policy is confusing and bereft of focus and direction. The Prime Minister has pursued a personalised foreign policy. His tendency to disparage the predecessors and diminish India’s achievements since Independence has undercut the country’s credibility abroad.

Be it the issue of corruption or social justice, the BJP has done a great disservice to the nation. The Congress, under the leadership of its new president Rahul Gandhi, is on the comeback trail with people looking at us for change.

We all are fighting as a single unit and will adopt a pragmatic approach for cooperation with all like-minded parties and evolve a common workable programme to defeat the BJP-RSS combine in the 2019 elections.
The writer is a Congress leader and AICC member