Modi govt is tweaking GST slabs as the BJP is getting nervous about Gujarat polls. 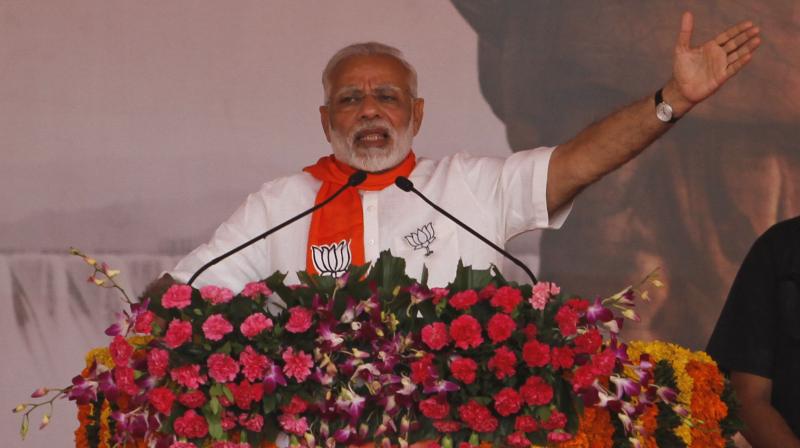 The BJP has always been in the habit of patting itself on the back. Narendra Modi rode his way to South Block by constantly chanting the development mantra. Now it is surprising to see that the BJP has been in power in Gujarat for 22 years but it is still not confident about its chances in the coming Assembly elections. There have been a lot of surprises about Gujarat, and the Election Commission decided to delay the announcement of elections in the state. This meant a delay in the coming into force of the model code of conduct (MCC).

The Prime Minister was in the state a few days back. He sensed traders are unhappy and tried to shift the responsibility of a shoddy GST away from his government. He addressed a gathering of BJP workers, switching to Gujarati, and assured the business community to trust the party and its government’s word on the issue of GST, which, he said, had been approved by all political parties. “We are making efforts to sort out pending bottlenecks, if any, in periodical GST Council meetings.” He also assured that their old records wouldn’t be scrutinised again. It would have been better had these bottlenecks been sorted out before making the grand spectacle of a midnight gong on June 30.

Now with the MCC not in force, reports came in that the BJP-ruled Ahmedabad Municipal Corporation (AMC) extended its standing committee meeting by an hour-and-a-half to clear projects worth Rs 530 crores in just 10 minutes. In Vadodara, the BJP-ruled Vadodara Municipal Corporation (VMC) cleared 59 development projects, of which road projects itself are worth Rs 47.50 crores. Similarly, more media reports are emanating that the Prime Minister will once again go to Gujarat on October 23, two days before Labh Pancham, the auspicious day after the Gujarati New Year when businesses reopen. He will inaugurate development projects worth Rs 780 crores in Vadodara. Once again, surprisingly, in view of PM’s visit, Gujarat chief minister Vijay Rupani, who was set to inaugurate projects at a mega-event on Sunday, called off his visit to the city on Saturday. As per the instructions of the national BJP leadership, the Gujarat chief minister reduced VAT on fuel prices. The Gujarat government has just announced loans up to Rs 3 lakhs to farmers at zero per cent interest. The seven per cent interest on loan will be paid by the state and Centre.

So this is the action that has taken place in the last one week or so. Just to set the record straight, the Congress supports all decisions to ease the burden of farmers and the common man. Having said that, what was the BJP government in Gujarat doing all this while? Why does it take the impending announcement of Assembly elections for the BJP to come out of the woodwork and go on an inauguration spree? This shows that the BJP has taken the people of Gujarat for granted, and now are trying to mend fences with a volley of “jumlas”.

The economy is in shambles. There are no jobs; unemployment is rising. Consumer confidence is at a three-year low. Festivals are around the corner, but people have no money in their accounts due to the PM’s personal agenda of downgrading the economy. Savings are being drained.

The BJP in its “know-it-all” style has made a complete mockery of the entire spirit, direction and purpose of the GST Bill introduced by Congress-UPA. Now it is realising its folly and trying to hoodwink the people again in classic BJP style.

The writer is a member of the AICC

Prime Minister Narendra Modi on October 7 hailed the sweeping changes in the GST to give relief to small and medium businesses, saying his government does not want the country’s business class to get caught in red tape. The Prime Minister said he was happy that the changes made by the GST Council, which met on October 6, had been welcomed all over the country, as if Diwali had come early. “You all must be busy preparing for Diwali, and in Gujarat, Diwali is celebrated with great enthusiasm, specially among businessmen.”

But the Opposition, specially the Congress, is not able to digest these reliefs and they are stating that these are announced in consideration of the Gujarat elections that are going to be held by the end of this year.

But that is not correct. Mr Modi said the government had earlier stated that it will study the GST for three months following its implementation and then fix the problems. Mr Modi said: “Wherever there are problems in these three months, as in the areas of management, shortage of technology, problems related to rules, complaints regarding rates, trouble in practical experience of business class, we will address it.” “We do not want the country’s business class to get caught in red tapism, files, bureaucracy, I will never want this,” he added. The PM said that, based on the information the government had, finance minister Arun Jaitley convinced everyone at the GST Council and said: “I am happy that it has been welcomed in one voice across the country.”

In fact, I don’t understand why the Congress is opposing GST and its decisions. The Congress was the one which brought GST. It is an equal partner in the GST decision and it should not spread lies about GST. The decision was not taken by Parliament or Mr Modi; it was made by the governments of all political parties, including the Congress governments of Punjab, Karnataka and Meghalaya.

When the Opposition says that these GST sops are for wooing the Gujarat people, it’s an insult for all Gujaratis. Gujaratis are never influenced by sops; they take decisions on the basis of who they think best for the state, that is the reason they chose Mr Modi and the BJP for so many years.

And with pride I can say that Mr Modi has never let them down, since he took office as chief minister in Gujarat. Gujarat has never looked back in terms of growth of the state. With only six per cent of India’s land mass and barely five per cent population, Gujarat has managed to account 7.6 per cent of the country’s GDP and 22 per cent of its exports. Its gross state domestic product (GSDP) growth is around 10 per cent, which is faster than India’s. This is an extraordinary accomplishment. Prior to 2001, Gujarat developed at 5.1 per cent.

This is the way the Modi government is working — it has launched 102 schemes, like Jan Dhan Yojana, LPG reforms, electrification of the entire country, Mudra Yojana, etc. These are for the benefit of all sections of people and if the Opposition says we are doing it for votes, then their approach is very wrong and small.

Mr Jaitley has rightly criticised the Congress for opposing the introduction of GST and demonetisation. He said that the Uttar Pradesh election showed the BJP had the support of people on demonetisation while the Gujarat polls would prove who enjoyed the backing of people on GST.

Not only Gujaratis, but the entire nation, is supporting Mr Modi’s policies whether it’s demonetisation or GST. We have proved it in UP, and now it’s Gujarat’s turn.

The writer is Delhi’s BJP spokesperson