A cashless India is an impractical idea in the near future. 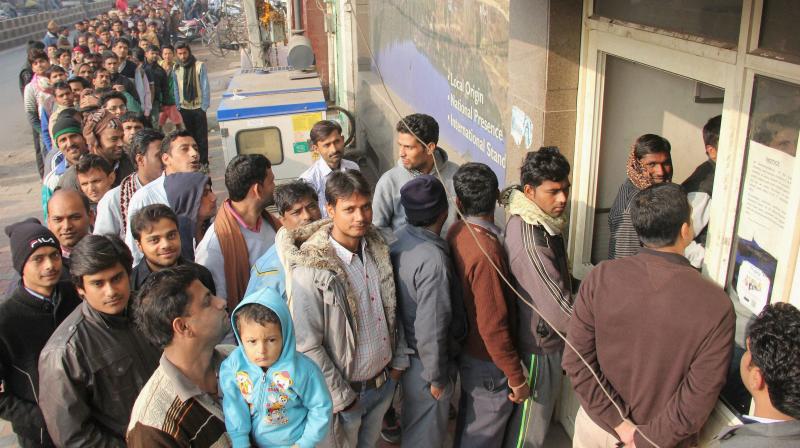 People stand in a long queue to withdraw money from an ATM in Gurugram. (Photo: PTI)

It will need a change of mindset
Inarguably, “cashless India” is a good goal to strive for. It is good to be ambitious and seize the opportunity created by the current demonetisation drive. However, one needs to tamper one’s expectations with what is achievable in near term or even over next two-three years.

To be able to go cashless, one needs to have both supply and demand conditions in place. On the supply side, one needs appropriate infrastructure as well as people well-trained in use of different modes of cashless transactions. And on the demand side, one needs a digitally literate consumer who is also “willing” to make a switchover to using cashless modes of transaction. Additionally, there ought to be in place financial incentives for all actors, on both sides, to prefer cashless transactions over using paper currency. These are then the basic conditions needed to promote cashless India. Even if one is able to secure these basic conditions, which is a giant leap for India’s scale, cashless India is not guaranteed for a few very good reasons.

Why talk of rural settings alone? Even in urban settings, where putting the basic conditions for cashless India is relatively easy, this is going to be a significant challenge. I illustrate this with my personal experience.

A few shopkeepers in my neighbourhood market are refusing to introduce digital payment options, and for those who have introduced them, it is definitely not their preferred choice.

They would rather give additional cash discounts than accept payment in digital form. Why so? It is not that they are digitally illiterate. Many of them are already using smartphones. It is also not that they are “fence sitters,” adopting “wait and watch” strategy. The fact is that most of them have been under-reporting their sales and income and paying much less tax to the government than they should have been. By going cashless, their “true” sale/income would be revealed and they would have to shell out much higher taxes. It’s little wonder then why these shopkeepers are refusing to switch over.

To promote digital transactions in the country, the government has come up with a slew of measures such as giving financial incentives to consumers, incentives to district administrations to reach out to the general public and have them shifted to cashless payments. Similarly, the government is making special efforts in generating awareness and making the public literate in digital transactions. While all this is much required, the government needs to be a little pragmatic about cashless India. Getting the public move on to the digital payment system is not just a simple issue of behaviour change through awareness and literacy. It is also a question of changing values and beliefs of the people who have avoided paying taxes for years.

Rajeev Ahuja is a development economist formerly with the Bill and Melinda Gates Foundation and the World Bank. He can be contacted at ahujaahuja@yahoo.com

A conducive environment exists now
On November 8, the NDA government took a bold and visionary decision to withdraw the legal tender status of old banknotes in the denominations of Rs 500 and Rs 1,000. With one stone Mr Modi was eyeing several birds. The intent of this decision was to control the menace of black money and terror financing, while moving towards a less-cash economy by promoting digital payments.

In a culture as paranoid about surveillance and creating dependency on modern technology, the resistance associated with moving to cashless society is understandable. The problem with the arguments for moving to a cashless society is based on India’s rational, and our attachment to cash, eternal and emotional.

India is demographically ready with its 65 per cent population being young, besides there are billion-plus mobile phone users, out of them 300 million using smartphones and about 200 million having broadband connections. While 173 million people are using Internet on their mobile phones, all of this is supporting India’s cashless drive in a big way.

Also, the National Electronic Funds Transfer facility is available at 130,013 branches comprising of 172 banks, in addition to business correspondent outlets. Mobile banking service growth surged by 126.6 per cent in terms of volume and 290.3 per cent in terms of value handling 389 million transactions valued at Rs 4 trillion during 2015-16, indicates the marked shift to a cashless economy. Digital payments have increased in the range of 400 to 1,000 per cent since November 8, 2016. This figure does not include transactions done through Master and Visa cards.

India is increasingly becoming a robust ecosystem for a digital society. This basic infrastructure has also been supported by financial inclusion by opening of over 258 million PMJDY accounts in last three years. With 140 million PMJDY accounts seeded with Aadhaar numbers and over 200 million accountholders having RuPay cards, the government has created a conducive environment, where poor people can also do cashless transactions through Aadhaar Enabled Payment Systems or PoS machines. With the advancement in mobile technology, mobile tractions has tripled in the last five years, opening new vistas toward a cashless society and it’s growing in scope and reach each day.

The government is augmenting infrastructure necessary for digital payments and has asked banks to augment 10 lakh new PoS machines. As per the RBI data the PoS terminals has doubled in the last five years. Apart from this, the government has announced 11 points package for promotion of digital and cashless economy. Incentivising cashless transactions, the Central government through Nabard will extend financial support to eligible banks for deployment of two PoS devices each in one lakh villages with a population of less than 10,000. This will ensure expansion of digital payment infrastructure in rural areas. These PoS machines are intended to be deployed at primary cooperative societies/milk societies/agricultural input dealers to facilitate agri-related transactions through digital means.

All these facts point to the paradigm that a huge movement in favour of digitisation is taking place in India. The rational benefit of moving into the less-cash society is immense and certainly outweighs the attachment to cash. The cashless payment system reduces time, eliminates cash handling costs, creates efficiencies and lubricates economy.