Women in battle: Now, or later?

It’s still too early for India to accept women soldiers in combat. 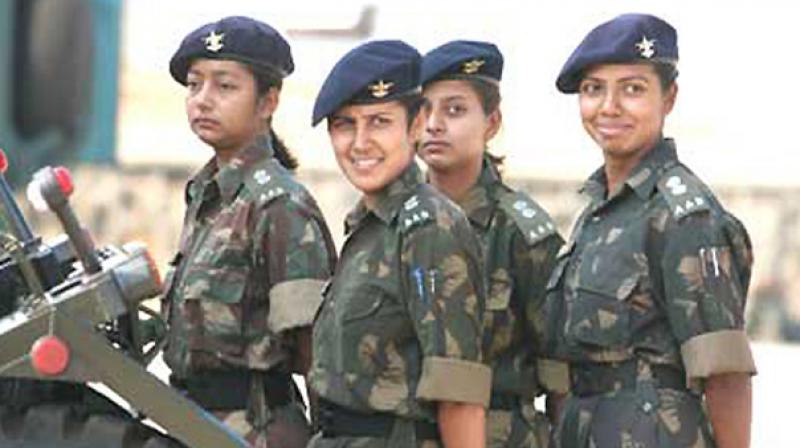 The contending mainstream narratives on women in combat in the Army propelled by male and female protagonists lend bias and hues to disparate arguments. (Photo: PTI)

It may be inevitable, but not as yet
Rakesh Sharma

The contending mainstream narratives on women in combat in the Army propelled by male and female protagonists lend bias and hues to disparate arguments. The epithet “combat” by itself is non-conformist in usage. Riot control is combat, engaging an adversarial aircraft by firing an air defence missile is so, as is establishing communication infrastructure in Kargil, supplying ammunition in Kupwara or erecting a bridge on the Lohit river. For the task that the Army undertakes, these are imperative combat roles.

In debate, however, combat roles for women actually are deemed identical to that of a self-contained infantry soldier in a small patrol in the dense jungles of the Northeast, or along the LoC in J&K. Combat is again thought to be in the steaming deserts of South Rajasthan as part of tank crew.

It is presumed that the mental and physical capabilities for women, despite the physiological concerns and the skeletal structure, can be attained by training, though the current standards have been watered down at the entry stage, during training and subsequent testing during career.

For women, the longevity in combat (as evinced currently by the frontline infantry soldiers with sustained separation from families), and the rigours of overstretching to retain the physical and psychological conditioning, is bound to take its toll on their health and cause attrition.

In a highly competitive environment, this becomes a serious management issue, to carry and place the unfit in scarce peacetime assignments, and ensure motivation for those repeatedly deployed in hardships.

Not wanting to sound misogynistic, with the traditional and cultural roots of Indian society, specially the rural recruitment base, the male population of the Indian Army will require a credible psychological reorientation.

Of course there will be need for gender-sensitisation for men, by no measure a small task. This is specially so with a larger number of males and a few females, cooped up for days, weeks or months in a very small post of a dozen soldiers or so, as is but normal in super-high-altitude areas. There are bound to be physical, physiological and psychological anxieties.

Most importantly is to fathom the operational environment that exists, currently. Mutilation of soldiers has occurred in recent times in patrolling in proximity to LoC and caused nationally heated passions. There is a psychologically and culturally, protective behaviour characteristic among male society towards women, which at the heat of military operations, say under fire or in an ambush, may lead to poorer decisions that will have far-reaching implications.

Understandably, poor decisions are still being made in the current scenario, and these could well multiply. Over-protectionism in operations may reduce the proverbial bayonet strength.

All that has been stated above may not be new or original. It may also be hyperbole, exaggeration and overstating the obvious.

And, yes, women may be willing to accept the risks, and why should men decide what is in store!

But for the operationally committed Corps of Infantry, Armoured Corps and the Mechanised Infantry, haste at this juncture may adversely affect and lead to loss of combat effectiveness.

Induction of women even in combat units may be inevitable over time, and the writing may be on the wall, but well into future, but not as yet!

Lt. Gen. Rakesh Sharma recently retired as adjutant-general of the Indian Army. He had earlier commanded the Fire and Fury Corps in Ladakh.

It is a facet of women’s empowerment
K.R. Prasad

There was an official announcement recently that the Army was opening its doors for women in combat roles. Indeed a “wow” moment for women in India! It is not a small or insignificant move by the government.

The Indian Army is one of the best and the largest armies in the world. However, it swings in favour of men in numbers. Way back in the ’90s, after a series of heated debates and discussions, a green signal was sent out for women to enter the Army. Today, they are represented in Ordnance, ASC, Medical, Educational Corps, etc.

The adversities were many, the physical vulnerability of women, the stereotyped mentality of the male dominated force, social unpreparedness to reintegrate women affected by violence and aggression… the list is endless. But the arguments in favour of women in the armed forces far outweighed the ill consequences. It is in a way, a facet of women’s empowerment.

Entering a male bastion, working shoulder to shoulder with fellow men and comrades, overcoming patriarchal stereotypes, engaging in all activities on the same footing as men, serving in difficult terrain with no preferential treatment, boosts the morale of women who know and believe that they are second to none.

Perhaps because of the species-specific growth differentials, some selection criteria might have been tweaked to allow women into the Army. But then, this is essential as the bars have to cater to the differentials and cannot be the same. If it were, it would have eliminated many from making this career choice and surely would not have been fair to women.

Anyone would agree that women display a great level of tolerance, patience, professionalism, empathy and understanding and a high degree of emotional quotient — the qualities essential in a hostile and aggressive environment. Operations today go beyond the physical level; they are technologically sophisticated. Use of technology in most of the aspects of a battle is on increase and will continue to do so. There is no reason why women don’t fit the bill here. The vulnerability that they may face is when they are captured by the enemy and subjected to physical and sexual abuse. Personal and social adjustment could become a nightmare and our social fabric is possibly still ill-equipped to receive and reintegrate them in society. However, these are only assumptions and fears.

While the government has taken decision in the positive direction to include women in combat roles, it needs to simultaneously sensitise men in the force to accept women at par, help overcome any stereotypes which prejudice actions; empower women to acclimatise to combat roles; build, rebuild and strengthen the social fabric to accept and take pride in the giant steps taken by women to be a part of this great and reputed Army and to educate more and more young women to have belief in one’s own strength and confidence and to choose this career path.

Women constitute almost nearly half of India’s population and it is but fair that they have an equal opportunity to all careers, including combat roles in the Army. Inclusiveness is a sign of development and maturity of a nation. We have notable instances in the history of our country where valiant women have fought fearlessly in combat role against enemies. It’s high time that they regain the lost glory. I have no doubt that women will be able to take up this challenge and emerge victorious, as always.

Maj. Gen. K.R. Prasad (Retd) is from the Corps of Signals. He is now chief mentor to Janaagraha, an NGO in Bengaluru.