Rahul Gandhi criticising the Modi government in the US is not an insult to India. 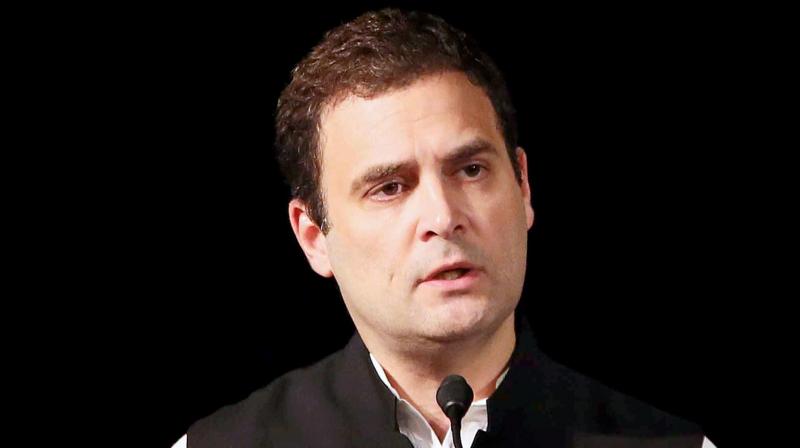 The lies, facts unfurled by PM had to be exposed

The problem faced by the BJP is that it finds it difficult to differentiate between India as our motherland and the NDA government at the Centre. With little or no bandwidth to understand this fine distinction between the government and motherland, it has heaped allegations and insults against Congress vice-president led by Cabinet ministers and senior leaders of the BJP. It shows us the mindset of the BJP that the facts brought out by Rahul Gandhi in his speech at University of California are being construed as an insult. Rather, the speech has the imprint of a mature political leader with outstanding grasp of current issues and a vision for the future. Mr Gandhi has echoed concerns expressed by leading experts on India’s inability in handling serious issues. Declining economic growth, ill-conceived demonetisation, inability of the government to create jobs, inefficient GST implementation, apathy to farming distress, politics of polarisation, growing culture of hatred and violence — these are issues being discussed every day in the world media and also by Indians. Mr Gandhi has only reiterated in a few words what the world is already aware of.

Prime Minister Narendra Modi, during his foreign visits, has underplayed the achievements of past Indian governments. His claim that the developments of the past 65 years have been achieved after he assumed power in 2014 is laughable. He had called Indians corrupt. He has declared that before him India could not earn the recognition and respect of the world as nothing worth mentioning was achieved. He heaped insult on the Indian people by stating that Indians were ashamed of their origin. He insulted the nation by stating that before he became Prime Minister, India was known for going around the world with a begging bowl. This when India before he became Prime Minister was racing ahead with an average eight per cent growth! Either he is ignorant of history, or has conveniently chosen to hide facts behind his jumlas.

The lies and misrepresentation of facts unfurled by the Prime Minister across the globe had to be exposed. Mr Gandhi put things in their true perspective and set the record straight on the twisting of historical truths, and unfair and unethical belittling of previous governments. He took listeners down memory lane and reminded them of the glorious achievements of Indians under visionary and progressive leadership provided by some of the greatest leaders the world has ever produced.

Mr Modi, of the visionary leadership provided by Jawaharlal Nehru to India’s long march to growth and development since Independence after overcoming the colonial legacy of economy under development, near total illiteracy, gross poverty, stark social inequality and injustice. He has spoken regarding the farsighted leadership provided by Lal Bahadur Shastri, Indira Gandhi and Rajiv Gandhi, who despite facing multiple challenges brought the country out of poverty and laid the foundations of a modern nation state. Can one deny the contribution of Rajiv Gandhi in India’s achieving overall technological leadership and creating human resources with no equal anywhere in the world? Since Independence, India from being one of the poorest nations has progressed to be one of the fastest-growing economies and a member of the elite top 10 economic powers in the world.

Mr Rahul Gandhi has every reason to feel proud of the commitment of the Congress leadership in creating and upholding the sanctity of the various institutions intact. Can he be blamed for expressing his agony and torment in seeing these institutions built with blood and sweat, being systematically undermined?

His speech expresses the anguish of a nationalist and a patriot who does not want to see the good work carried out by his forefathers in developing India brick by brick into one of the mightiest nations today, and for which two of them sacrificed their lives, being undone. It is the inner angst of a statesman who loves his motherland immensely and who is terrified of the future history of this country being written as “an opportunity lost”.

The writer is secretary of the AICC communications department

Rahul has painted a dark picture of our nation

The 1962 war was a disaster for India when the nation saw humiliating defeat and the loss of territories, prestige and the lives of hundreds of soldiers. There had been intense debate over the failure of Jawaharlal Nehru’s policies, perspectives and hypothetical optimism in international politics. After the India-China war, Jana Sangh leader Deendayal Upadhyay went abroad and questions were put to him regarding India’s foreign policy, etc, when he defended the nation and responded as a statesman.

The healthy tradition of not engaging foreigners in our domestic affairs has been shattered with Rahul Gandhi’s address to students at the University of California, where he presented a dark picture of the nation, of the democratically-elected government and of civil society. In politics, the time, context and place are important to judge any statement. Had the same speech critical of the Narendra Modi government been made by an Opposition leader in Parliament or anywhere within the country, it would have seemed entirely natural. But he chose to speak on foreign soil, to a largely foreign audience, criticising

Mr Modi, India’s foreign policy and on other issues, including demonetisation and democracy.

This was against all conventions, but unsurprisingly he got applauded by the professional Modi critics and RSS baiters. He informed the world that India was not now a place where one could enjoy the privilege of free speech, forgetting that urban Naxalites and others continue with their Modi baiting and anti-RSS tirades on campuses and in television debates with regularity. The degradation of the democratic discourse in India can also be seen in the kind of language being used by leaders and intellectuals.

In the past too, the expanding influence of the RSS-BJP had led the Left and pseudo-secular intellectuals and political actors to solicit the international community’s support to combat them. Teesta Setalvad joined hands with Pakistani delegates at one of the UN forums to stall the VHP’s demand for NGO status in 2001. Seventy intellectuals and parliamentarians wrote to former US President Barack Obama to refuse a visa to Mr Narendra Modi, alleging he was the kingpin of the “2002 genocide”. But all these efforts were inconspicuous due to the known allegiances of such people through NGOs and foreign links, based on ideology, common thinking and anti-India baiting. At no time, though, had a leader of national stature done so.

Rahul Gandhi has not only legitimised anti-India baiting but also formalised the anti-Modi league of domestic and foreign elements and globalised anti-Modism. Even Jawaharlal Nehru had never named his political adversaries and used linguistic diplomacy to make his point — such as “the Indian people stand for progress, democracy and never encouraged right reactionaries, his government was determined to eliminate elements of communalism and fascism, India can never be a votary of majoritarianism”.

Mr Gandhi’s speech on foreign soil does make a difference — now that he has invited foreign elements to directly meddle in Indian affairs, saying that democracy in India was dying as the cult of violence, neo-fascists and the far-right were “taking over India”. He has done great harm by not only tossing away traditional norms of political rivalry but also internationalising ideological and political conflicts. This is the second error of the Nehru-Gandhi dynasty — the first was Nehru’s when he had internationalised Kashmir.

Mr Gandhi proudly proclaimed his dynastic lineage and declaimed India’s ideals of democracy by using the analogy of artists, doctors and minor politicians’ sons and siblings appropriating their parent’s legacies. This was bad logic and worse philosophy.

India has always been a home of democracy. We celebrate republics of ancient India. The Nehru-Gandhi dynasty was not a natural outcome of our society, but systematically imposed on the Congress, and become a hazard for it. Our ideals or perspective haven’t changed. Mr Gandhi has painted a dark picture of our democracy, and this won’t be easily forgiven by Indians.

The writer is associate professor, University of Delhi, and director of the India Policy Foundation