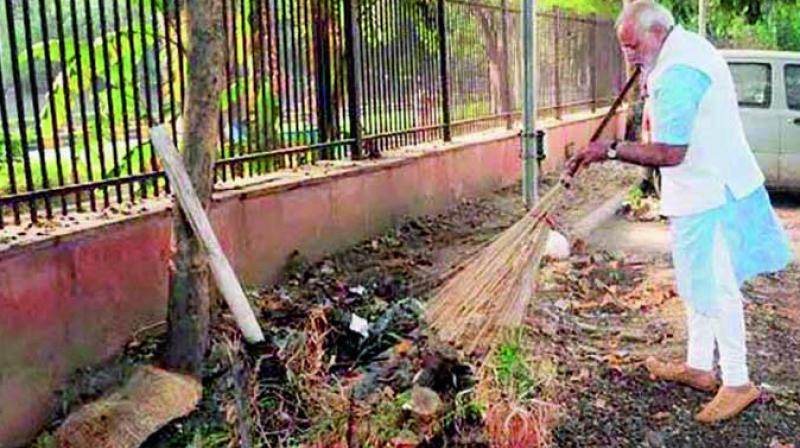 The PM has made very tall promises
S.V. Ramani

Prime Minister Narendra Modi is famous for renaming and repacking most of the policies and welfare programme initiatives of the previous government and then spend several hundred crores of rupees in advertisements and publicity to claim credit and earn political brownie points for the same. The Swachchh Bharat Abhiyan is a case in point.

The Swachchh Bharat mission is not the first sanitation programme of its kind. Since 1954, a “rural sanitation programme” has been under implementation in India. Rajiv Gandhi significantly expanded the programme in 1986, when his government launched the Central Rural Sanitation Programme. Then the Atal Behari Vajpayee government in 1999 launched the Total Sanitation Campaign. The UPA government led by Manmohan Singh implemented the Nirmal Bharat Abhiyan, which is now rechristened as Swachchh Bharat Abhiyan.

In October 2014, Mr Modi in his flamboyant style inaugurated the Swachchh Bharat Abhiyan by sweeping the police station premises in central Delhi. From then on he made use of every platform available to glorify the mission and show that this is his government’s most prestigious flagship programme. He has involved every arm of the government from Union ministers to village panchayat administration in promoting the mission and also imposed 0.5 per cent cess on all taxable services and set up the Swachchh Bharat Kosh to attract donations to fund the campaign.

The PM has made very tall promises and that too to achieve all within the deadline of October 2019. While the mission’s major objective is to completely eliminate open defecation in India, it also promises to deliver door-to-door collection of garbage and processing all inorganic trash to generate energy. It also has three “sub-missions”, namely ensuring latrines in country’s schools, all anganwadi centres, and to build latrines as part of other government programmes. In addition, the government also has pledged sanitary treatment of sewage. However, the greatest challenge is the promise to eradicate the practice of manual scavenging.

These are enormous goals and admirable ones. The success or failure of this mission has to be viewed from the achievement of all these objectives and so far it is obvious that it has failed in almost all its objectives. The World Bank in its appraisal report in November 2015 also cautioned and said that the campaign is “technically sound”, but going by the past experience, its targets were vastly unrealistic.

The mission has completely failed so far to end the employment of manual scavengers and they continue to work in sewers and septic tanks.

The mission’s budget is estimated around `2.23 lakh crores and grand official pronouncements and crores spent on advertisements have generated great deal of attention. Hence, it is the duty of every Indian to start seeking answers on the expenditures, implementation and performance of the mission. However, there is lack of transparency in the government’s data on spending of campaign funds and accounts made public so far does not disclose proof of how these funds have been used, or if they have been used at all. Second, no information is available if third-party evaluation of results to be conducted by “independent project review and monitoring agencies” has been carried out.

As time goes by, it is becoming clear that the zeal and enthusiasm displayed by the government is less for proper implementation and more for drawing attention to the campaign and chest-thumping. The Swachchh Bharat mission fits well in his scheme of “lots of sound but void of substance”.

While the Swachchh Bharat Abhiyan has failed to achieve its stated objectives, the worry is whether it will become “Swachchh Khazana Abhiyan” of the exchequer.
The writer is the AICC communications department secretary

The mission has struck a chord with the people
Nupur Sharma

Picking up from where Mahatma Gandhi left his appeal for cleanliness, Prime Minister Narendra Modi launched the Swachchh Bharat Abhiyan on October 2, 2014. Gandhi Jayanti is perhaps one which as of today resonates with many Indians as not only a day to commemorate the Mahatma’s memory, but to a day to follow his thoughts regarding cleanliness in true earnest.

To think of it, in over seven decades of India’s freedom, no government had ever bothered to give requisite importance to improving the basic standard of living of millions of Indians. The rustic reality of India brings to mind the unawareness and unwillingness of not only the majority rural population living in unhygienic and thus inhabitable conditions, but of the executive/power-centre which for incomprehensible reasons thought it better to let the poorest of the poor die a slow death in their ignorance and obscure lives.

Rightly citing unhygienic living conditions, unclean provisions of sanitation, and importantly safety of rural women who went to open fields to relieve themselves only to never return as well as for tourism promotion, the Prime Minister launched this campaign by picking up a broom and leading by example. Many well-known faces from across professions have followed suit knowing well that this is perhaps the quickest way to educate all Indians about the hazards of being unhygienic and health benefits of living in a clean environment.

This all encompassing campaign takes within its ambit not only the goal to make India open defecation free (ODF), but also incentives on construction of individual toilets, construction of community/public built toilets as well as waste management, that is, waste to energy and waste to compost production.

Since October 2, 2014, five crore-plus household toilets have been constructed under this mission in urban and rural India. As of now, six states, nearly 220 districts and 2.6 lakh villages across India have declared themselves ODF, out of which 1.5 lakh villages have also ranked themselves on village swachchhta index based on solid/liquid waste management. Quality Council of India has recently put out a survey citing “dramatic improvement in coverage and usage of toilets” and “behavioural change, specially in rural India”, three years after launch of the campaign. The QCI report further states that as per Census 2011, over five out of 10 households did not have a toilet, that is, almost 50 per cent and as on date less than three on 10 households or only 26.75 per cent households are without a toilet today. The drastic change is in rural areas where the coverage has more than doubled. From 69 per cent households without a toilet, the number has fallen to 32.5 per cent with nine on 10 or 91.29 per cent of these rural households actively using toilets.

From stories regularly reported in the media, the spearheaders of this drive are the millions of young schoolchildren and college-going adults who have come up with unique ideas of promoting the drive, from waste collection to waste management techniques to collecting friends and heading out on a cleaning mission in their local areas. With many private media houses promoting this campaign on their own volition, movies being made carrying the message of importance of proper sanitation and likes of Bill Gates lauding the success of Swachchh Bharat in April 2017, we have ample reason to believe this campaign has rightly struck a chord with the people and is a successful step in the right direction for the betterment of India.

The naysayers must know the government’s job is not simply to administer and execute policies; it is also to spread awareness and educate the people for their own welfare. The mission is, after all, cleaning up their environment too.
The writer is a BJP spokesperson