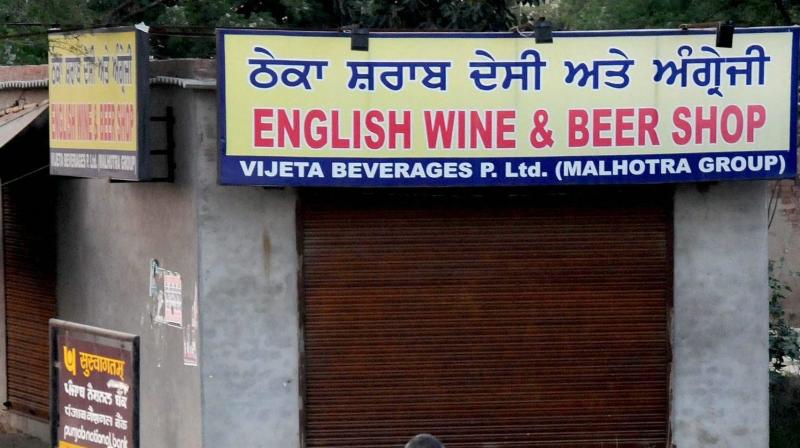 A closed liquor shop as the Supreme Court order to ban liquor vends located within 500 meters of Punjab's National and State Highways from April 1 in Amritsar. (Photo: PTI)

The laws to check drunken driving need to be made more stringent and their implementation more effective. Under the Motor Vehicles Act, a driver is never punished with imprisonment, though there is a provision for that. The fine under this act is Rs 2,000 and must be raised to Rs 50,000 to make it a deterrent. The traffic policemen are drenched in corruption and let go of offending drivers after taking a bribe of few hundred rupees. Shutting down bars and restaurants will encourage illicit sale of alcohol at dhabas and give another excuse to the cops to make a quick buck.

Slick legalese needs to go hand in hand with slick implementation of laws, if one wants results. Under the Indian Penal Code, we don’t have any law that deals specifically with cases of drunken driving. If the driver hurts someone or kills someone in a road accident, he is punished for rash and negligent driving. If he kills someone while drunk and driving, in exceptional cases, he may be charged with culpable homicide not amounting to murder, which includes cases where the accused has knowledge that his act could cause death. But sometimes, a defence is taken that in case of drunken driving the accused would not have knowledge of the consequences of his act. A specific penal provision is required under the IPC to deal with cases of drunken driving. To ensure proper implementation of the laws, there is a need for police reforms, particularly in appointments, payscales and the qualifications of lower-rung police officials.

Most accidents along highways are caused by commercial vehicles. It is drivers of these vehicles who are more likely to drink and drive. As far as these drivers are concerned, they do not buy alcohol from bars and restaurants. They usually carry alcohol bottles in their vehicles or buy from thekas or dhabas.

A person travelling in his private car could also carry alcohol. Private car owners will not be affected by this move as they will not think twice about going a few extra metres to buy alcohol if they have to. Many people are travelling in chauffeur-driven cars on highways. This move will affect them by depriving them of a drink, without otherwise bringing any real benefit.

Many times people go to highway restaurants and hotels in groups and the driver may not drink alcohol but others might. Banning these roadside hotels and bars will deprive these people also of buying a drink when they would do no harm to anyone by buying a drink. The ban will, in fact, deprive the hotel and restaurant owners of their fundamental right to earn their livelihood.

For making highways safer, it’s important to check vehicles carrying alcohol, and this must be made an offence. Checks must be done to see if drivers are driving under the influence of alcohol. If these methods are followed strictly by police officials, it will be the best deterrent.

The ban is a hapless grope in the dark, not likely to achieve anything, far from ensuring safety on highways. It is a self-important display of asinine logic — faulty all the way.

The writer is a Supreme Court lawyer

The final goal is public safety, health: Dhruv Mohan
The Supreme Court, while concluding that there is no justification to allow liquor vends on state and/or national highways, issued certain directions under Article 142 of the Constitution, thereby rightly prohibiting the sale of liquor along national and state highways and over a distance of 500 metres from the outer edge of the highway or a service lane.

The court, after conscious consideration of the following facts, amongst others, that the state excise rules contain only enabling provisions and further, that there is no fundamental right to carry on business of liquor since as a matter of constitutional doctrine, Article 19(1)(g) does not extend to trade in liquor, which is consistently regarded as res extra commercium, issued the said prohibitive directions.

The directions issued are just and purported keeping the ultimate goal of public safety and health in mind. It is incomprehensible as to how the directions can be assailed as unconstitutional and wrong by some person(s) or that the same shall not have any effect on the consumption of alcohol by public. The advocacy of the directions encroaching upon any legislative act or power can only be a shallow attempt to create aspersions on the highest judicial minds of the country, as there is nothing in the order that could be construed as breach of any fundamental right(s) or could amount to judicial overreach.

Easy and quick access to a liquor vend even tempts the individual who otherwise may not be a habitual consumer, but is tempted by its sheer presence every few metres of his journey. A mind preoccupied with work or urgency to reach his destination shall be oblivious to the things that do not cross his vision, and thereby forgetting them, even if so, temporarily.

There can be no debate that most people coming home tired or travelling for leisure/work, specially with their families, shall refrain from taking any detour to purchase or consume alcohol. The mere convenience of the availability of liquor at stop(s) for refreshment during one’s journey, might tempt some consumers.

Further, commercial vehicles shall keep away from liquor vends as these vehicles are mostly fitted with GPS systems and any detour out of their route shall reflect so on the map and may be questioned by their employer. The monitoring of the vehicle’s location and movement acts as a deterrent to drivers of commercial vehicles on highways.

The cost to the State of lives lost in drunk driving accidents aggregate to much more than the State stands to lose from loss of revenue from liquor licences. A state banking on intoxicating its inhabitants for money cannot even remotely call itself a welfare state.

Any act to curtail a business, which promotes sale of intoxicating and unhealthy elixirs, is to be lauded and not frowned upon. In a country where the public at large sees the court as a last resort to justice and fairness, any suggestion of the non-application of mind by such a respected and deeply honoured institution should be dismissed.

Keeping in mind the paramount importance of public safety and health, there can be no doubt about the fact that these directions shall keep at least a considerable number of people away from liquor vends during their journey, if not all.

The writer is a Delhi high court lawyer