Reporter's Diary: Of buffaloes and bees

At least two of the 11 accused in the espionage racket have allegedly been found to be associated with the saffron outfit. 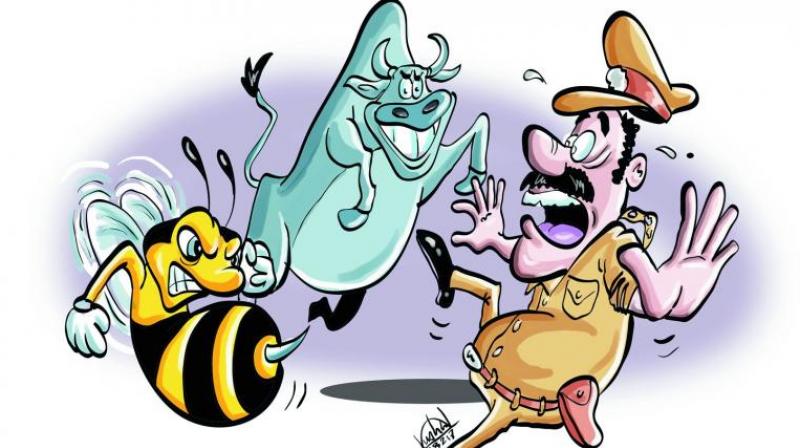 All district police chiefs have been told to ensure that there are no beehives in areas where VIP politicians address election rallies.

The police force in Rampur, the hometown of Samajwadi Party minister Azam Khan, finally heaved a sigh of relief this week when the elections in the district got over. The cops had been on their toes since the past one week when, during an election meeting of chief minister Akhilesh Yadav, bees attacked the crowd just before the arrival of Mr Yadav.

The cops went into a state of panic and had a tough time controlling the crowd and driving away bees. Several cops were also stung. The bee attack is considered an evil omen because in 2012 when bees were seen hovering on the dais during Mayawati’s rally, she got voted out of power.

Top police officials have now asked all district police chiefs to ensure that there are no beehives in the area where VIP politicians address election rallies.

“First we went around looking for Azam Khan’s buffaloes and were then asked to track BJP MLA Dharam Pal’s buffaloes, after which we were made to search for BJP MP Ram Shankar Katheria’s missing dog. Now it is the bees. It seems we have not joined the police force but are a part of the animal husbandry department,” grumbled a senior police official.

‘Saffronising ISI’
The Congress in Madhya Pradesh has hurled a bizarre charge against the Sangh Parivar by accusing the right-wing Hindutva brigade of attempting to “saffronise” Pakistan’s spy agency Inter-Services Intelligence (ISI). 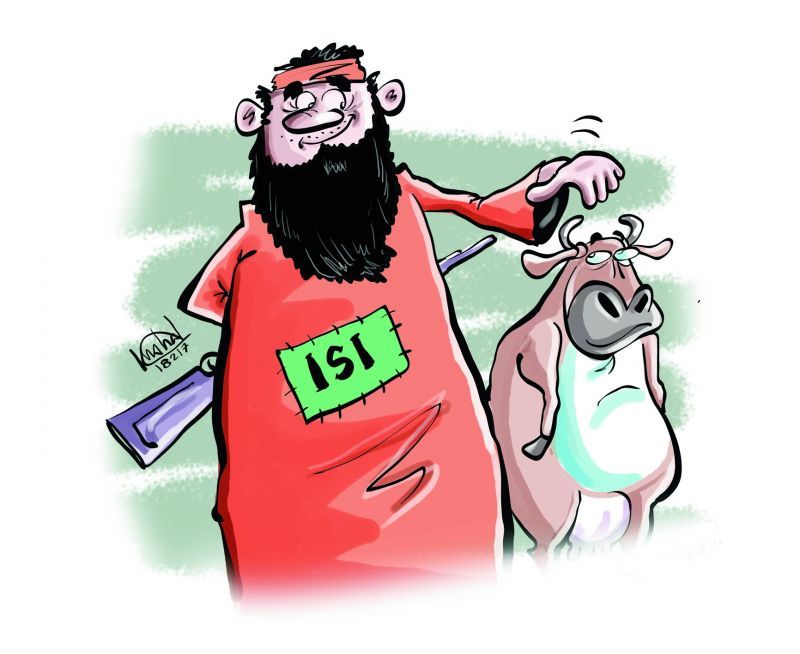 The Opposition party was making a mockery of the ruling BJP in the wake of the exposure of alleged links of some saffron activists with the recently-busted espionage ring run by the ISI in MP.

“The revelation on some saffron activists’ involvement in the espionage racket promoted by the ISI indicates the Sangh’s design to saffronise the Pak spy agency,” a Congress spokesman in MP quipped, apparently to ridicule the BJP’s “nationalist agenda” in the wake of the unsavoury exposure.

At least two of the 11 accused in the espionage racket have allegedly been found to be associated with the saffron outfit. While Dhruv Saxena had been one of the key members in the IT cell of the BJP, as per allegations by the Congress, local Vishwa Hindu Parishad (VHP) leader in Satna, MP, Ashish Singh Rathore, was said to be an associate of Balram Singh, the reported mastermind of the ring.

Mr Rathore was Satna district convenor of “Gau Raksha Samiti”, a wing of VHP. However, the BJP has disowned Mr Saxena as he was found in the company of several senior party leaders, including chief minister Shivraj Singh Chouhan, at some of their functions and posters.

Mr Rathore meanwhile, has been expelled from the VHP for having links with Balram.

“We will hail the Sangh if the outfit succeeds in completely saffronising the ISI and makes the ISI chief, Lt. Gen. Naveed Mukhtar, address his men with the slogan, Jai Shri Ram,” he retorted sarcastically.