Humility and humbleness are the prerequisites for a politician to be accepted by people. 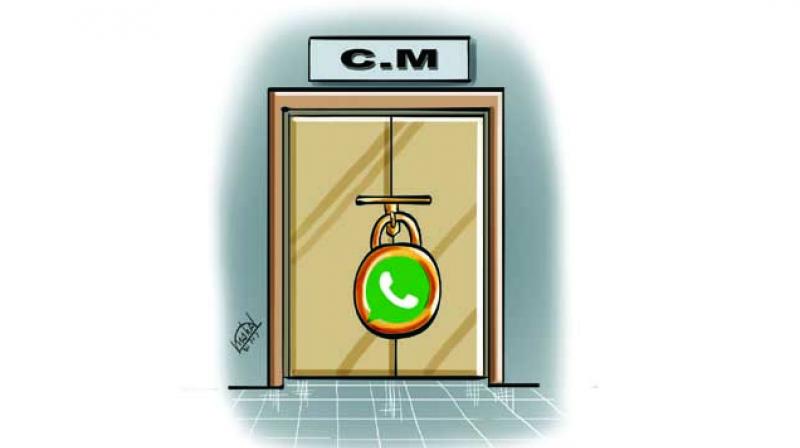 The state information department, that is supposed to act as a bridge between the government and the media, has also adopted a dictatorial posture.

“Shut the door” may be a popular campaign for Swachchh Bharat but the Yogi Adityanath government in Uttar Pradesh seems to be taking it a bit too seriously. Several departments in the Yogi government have suddenly stopped sending press releases to journalists on email and some of them prefer to send it through WhatsApp instead.

Reading pages of typed matter on WhatsApp and deciphering transfer lists of more than 100 officials at a time is an arduous task and when some journalists raised the issue with concerned officials, they were bluntly told that the chief minister did not wish information to be given to the media on a regular basis.

“You all should be grateful that some of us are taking photos and sending you the relevant information on WhatsApp. Actually even this is not allowed,” said a senior bureaucrat.

The state information department, that is supposed to act as a bridge between the government and the media, has also adopted a dictatorial posture. Journalists are now receiving messages about the chief minister’s programmes with a terse note that says: “Please cover”. The days of formal invitations are finally over.

This is called “shutting the door” — and firmly too.

Pradhan practises humility
Humility and humbleness are the prerequisites for a politician to be accepted by people. And such virtues, as it is said, catapult a common man in politics to an unimaginable and enviable height in his or her career. An aspiring politician needs to practise these qualities in his or her words and body language, as well.

Most likely to be the BJP’s chief ministerial candidate in Odisha in 2019, Union minister Dharmendra Pradhan seems to be trying hard to practice this for quite some time now. While inaugurating a liquefied natural gas project at Dhamra, the minister tried his best to project himself before the gathering with utmost modesty.

Mr Pradhan climbed the podium with folded hands and paid his obeisance to the audience, half bending his body at the waist. He then waved at the crowd. During his nearly 20 minutes talk, the minister described himself — not once but more than 10 times — as Gunduchi Musa (the proverbial squirrel in the Ramayan who helped Lord Ram build Setubandh) and a Dak Peon (postman).

The audience liked his words and cheered him in appreciation.

Mr Pradhan’s body language that day was strikingly different compared to his normal posture of being a carefree, tough guy in any other situation.