Opinion   Oped  31 Jul 2020  India has got a good start on path to self-reliance
Opinion, Oped

India has got a good start on path to self-reliance

In the first year of his second term, Narendra Modi’s landmark steps have been many 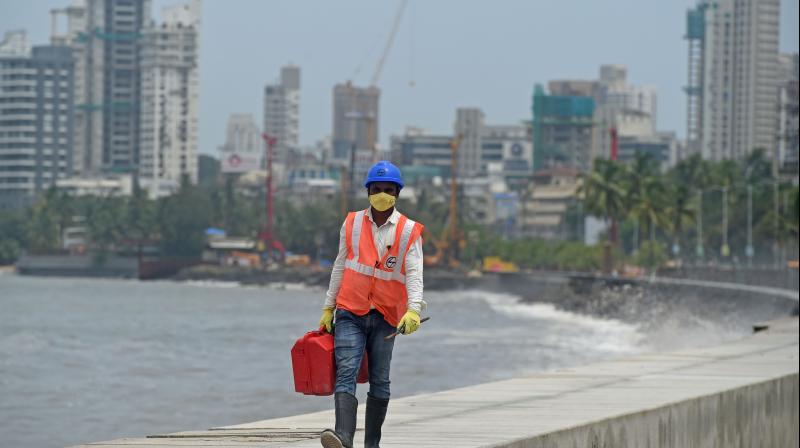 A worker walks near the construction site of a coastal road project in Mumbai . AFP Photo

Even as the coronavirus pandemic is bringing global economies to a grinding halt this year, Prime Minister Narendra Modi, undeterred by the enormity of the challenge, recently unleashed a Rs 20.97 lakh crore mega stimulus package, equal to roughly 10.48 per cent of India’s GDP.

Another Rs 90,000 crores is being spent for providing free foodgrain to over 80 crore people, which is more than double the population of the United States.

From being an importer in March this year to becoming the world’s second largest PPE kit manufacturer, producing over 4.5 lakh kits daily, Aatmanirbhar Bharat has taken firm roots.

Reduction in corporate tax rate from 30 per cent to 22 per cent and for new companies to 15 per cent, allowing the private sector in commercial coal mining on a revenue sharing basis with no end use restrictions, 100 per cent FDI via the automatic route in defence manufacturing, single brand retail and real estate broking services and privatisation of power distribution companies in Union Territories underpin the essence of Modinomics.

In the first year of his second term, Narendra Modi’s landmark steps have been many — the decision to implement Rs 102 lakh crore worth of infrastructure projects via the national infrastructure pipeline, lowering employees’ state insurance act (ESIC) contribution from 6.5 per cent to four per cent, which benefits 3.6 crore employees and 12.85 lakh employers, a monthly pension of Rs 3,000 to over 42 crore small traders and shopkeepers in the unorganised sector after they attain 60 years of age under the PM Shram Yogi Maandhan Yojana, passing the Code on Wages Bill 2019, which will benefit over 500 million workers across the country and, of course, the recent historic decision to defang agricultural produce marketing committees and amend the Essential Commodities Act of 1955, to enable farmers to sell their produce to whomsoever they wish to sell to without any inter-state barriers or any price or quantity related restrictions are measures that showcase how good politics and good economics can peacefully co-exist.

More recently, measures like the Rs 3 lakh crore of collateral free loans to micro, small and medium enterprises (MSMEs), liquidity support of Rs 6,750 crore by bringing provident fund rate down from 12 per cent to 10 per cent, reducing the benchmark repo rate to four per cent, the lowest in 20 years, Rs 2 lakh crore concessional credit for farmers and fishermen via Kisan Credit cards, throwing open six new airports for privatisation via the public-private partnership (PPP) route, allowing private sector in space exploration and, of course, decriminalising certain offences under the Companies Act have been commendable.

The Bank Nationalisation Act of 1969, a forgettable vestige of outdated Nehruvian socialism, has been a millstone for public sector banks.

By merging SBI with its five associates and the Bharatiya Mahila Bank in 2017, Mr Modi created a banking behemoth with an asset size of over Rs 41 lakh crores and over 370 million customers.

The decision to thereafter consolidate 10 public sector banks into four, allowing the private sector to enter into non-strategic areas and, the decision to privatise power distribution companies in Union Territories, are a reflection of how Modinomics is following the path of minimum government, maximum governance.

Be it Ayushman Bharat, the largest healthcare scheme globally, which has given free treatment to well over one crore people since its inception, the PM-Kisan initiative which gives Rs 6,000 per annum to over 14.5 crore farmers, or the PM Ujjwala Yojana that gave free gas connections last year, to over eight crore households, the Modi government has given last mile connectivity a whole new meaning.

Clearly, Mr Modi has many firsts to his credit, including PM Jan Dhan Yojana, the largest financial inclusion scheme in the world with over 38 crore account holders, the Swachh Bharat mission, the largest sanitation scheme globally, with over 11 crore toilets built and, of course,the direct benefit transfer scheme, that till date has directly transferred cash worth Rs 8.91 lakh crores, to various beneficiaries.

Under an inept UPA, money meant for the poor was pilfered by wily middlemen, but under the Modi government, the policy framework has been overhauled to ensure that Nehruvian-style nepotism does not stand a chance.

The Manipur water supply project, meant to provide clean drinking water to Greater Imphal and 1,700 villages in Manipur, is yet another example of how Modinomics is mainstreaming the North-east, which was neglected by the Congress for decades together.

This is evident from tech giant Apple’s decision of manufacturing one of its latest offerings — the iPhone 11, at Foxconn's Chennai plant.

Be it Google’s decision to invest $10bn in the next five-seven years via a digitisation fund, Samsung’s decision to manufacture smartwatches at its Noida plant, Amazon setting up its largest facility centre in Hyderabad last year, or the 750MW solar power plant coming up at Rewa in Madhya Pradesh, Mr Modi’s Make in India vision is shaping up robustly.

With a forex war chest of over $517 billion, clearly, the world is India’s oyster.