Cubans seemed to have silently rebutted the lopsided American view by sticking to Castro the Cuban leader rather than Castro the Communist. 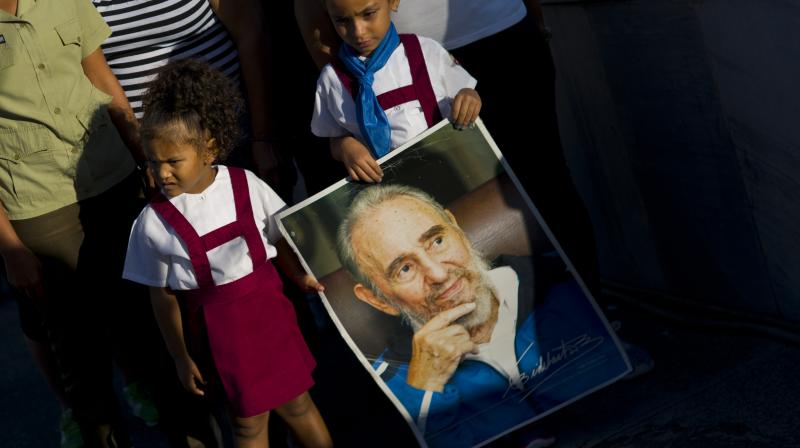 A child holds a portrait of Fidel Castro as mourners arrive to visit the memorial site for the late leader at the Revolution Plaza in Havana, Cuba. (Photo: AP)

Fidel Castro was no Joseph Stalin, he was no Mao Zedong. He was more like Ho Chi Minh. And that was the main reason for the longevity of his government. He was a Communist in a vague sense but he was no dogmatic Marxist. Perhaps he may not have read any Marx at all. Cuba was also a country which was used to revolutions and coups from the time it gained independence from the United States in 1902 after a three-year American occupation. And by the 1950s, Cuba was a fairly well-developed economy, though more than half the agriculture and mines were under American ownership. Cuba was always ready for a revolution as an escape from inefficient and dictatorial regimes. Remember that Castro had a failed coup in 1953 behind him before he made it good in 1959. In 1953, he was captured, imprisoned, freed and then exiled.

There is no doubt that what contributed to the making of the Castro legend as the David standing up against the Goliath that was the United States was the shabby Bay of Pigs episode, where 1,500 exiled Cubans tried to stage an invasion with the help of the notorious Central Intelligence Agency (CIA) in 1961. The 1962 Cuban missile crisis as a matter of fact helped to retrieve the American reputation when the then Soviet Union backed out. But the little-known fact of that episode is that the United States had agreed not to make any more attempts to overthrow the Cuban government. It is the second major American concession after Franklin Delano Roosevelt undid the Platt Act, which empowered the United States to meddle in Cuban affairs.

The survival of Castro from American machinations can be the stuff of folklore. But the more substantial fact of the success of Castro inside Cuba was that he remained a pragmatist. Though his co-revolutionary Che Guevara’s programme for weaning away from Cuban economy from sugarcane cultivation was abandoned, and Castro pursued a 10-million cane production plan and succeeded in the 1960s, the diversification of the economy was inevitable and it happened in the 1970s and the 1980s. There was the fact that Cuba was subsidised by the Soviet Union until its fall, but Castro and Cuba adjusted themselves to the post-Soviet era. The pragmatist in Castro is best seen in the fact that Cubans who were allowed to go to the United States remitted huge amounts in dollars, and the Cuban dictator did not show any aversion for the capitalist dollar.

The major achievement of the Castro government has been the welfare measures of free education, healthcare along with employment and housing, which seems to have kept the people at large in good humour. There is no doubt that he dealt harshly with his critics, imprisoned them or exiled them. But this did not seem to lead to popular discontent. Over the years, Cuban tourism became the mainstay of the economy even as agriculture and manufacturing declined considerably. In the last decade, under his brother Raul, the economy was opened up. It is interesting to note that Cuba sent its doctors and teachers to Venezuela in return for oil, a barter exchange.

Castro’s Cuba then coped with the tectonic shifts in the ideological and economic terms because the leader/dictator stuck to populism and not to any kind of rigid Marxist doctrine. He did support popular movements in some of the rebel movements, unsuccessfully in South America, and with a margin of success in Angola and Ethiopia. But he stuck to the basic goal of providing for Cubans. The United States, with its irrational hatred of all leftist regimes anywhere in the world, and specially in the Western hemisphere, tried every dirty trick. As in Vietnam, so in Cuba, the United States could not read the writing on the wall: Vietnamese and Cubans did not like bullies, and they stood together as a people. In other words, it is the nationalist pride of Vietnam and Cuba that defeated the arrogance of the United States. The US strategic leaders supported the most unpopular groups in Cuba as well as in the then South Vietnam and lost the strategic war.

The ideologues in Washington and elsewhere in the universities — the American educational institutions are unsurprisingly puppets in the government’s propaganda manoeuvres — viewed Castro as a Communist and therefore the enemy of democracy. The people of Cuba seemed to have silently rebutted the lopsided American view by sticking to Castro the Cuban leader rather than Castro the Communist. The state-run economy was not a huge success and people were allowed to run their own farms and businesses by and by. The iron curtain between Cuba and the United States was rather a thin one.

Castro did not create a personality cult, which prevented the governmental system from being flexible. His long-winded harangues might have been tiresome to the people and they must have yawned away to glory sitting through them, but there were not too many sycophants who insisted that the people should genuflect before the leader. Though most Cubans became less Roman Catholic than they were before the 1959 takeover — 1959 was not really a revolution — other Protestant churches have become active in the island country. Cubans, including Castro, seemed to have believed in letting things be and did not indulge in the decimation of the ideological enemy. This seems to be the main reason for the quietude in Cuban society and politics.

The antediluvian leftists, socialists and other political hippies this side of the Suez should remember that in the 1952 election Castro contested as a candidate of the Cuban People’s Party. The election was aborted through a coup of Fulgencio Batista, who was responsible for the 1940 constitution, and for some of the welfare and socialist measures in governance. Castro led the 26th of July Movement, and the Cuban Communist Party, which was set up in 1925 through the Third International, and which corroborated with the Batista government in 1940 and a little later as well, merged with the 26th of July Movement after the Castro takeover. The official Communist Party of Cuba came into existence in 1965 and it was declared the only official party in the constitution of 1976.

Unlike Stalin and Mao, who had to deify themselves in order to control large populations, Castro was content to be a popular and populist leader of about 10 million people of Cuba.