Is the Cold War starting all over again?

To a watching world it was a graphic demonstration of iron-fisted crowd control by the Israeli security forces, circa 2018. 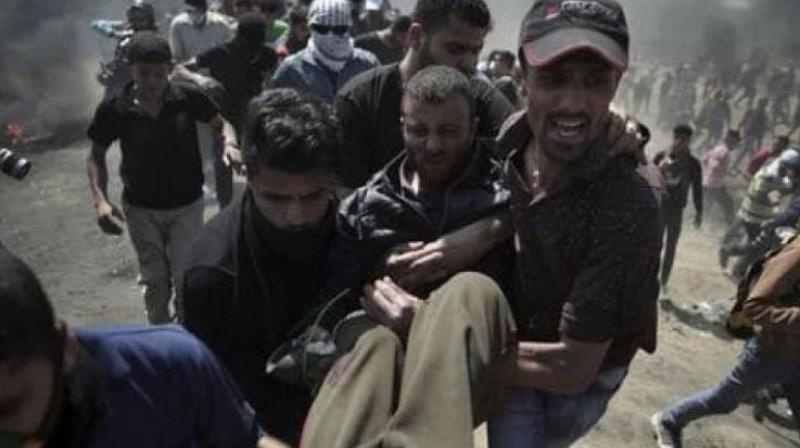 Palestinian protesters carry an injured man who was shot by Israeli troops during a protest at the Gaza Strip's border with Israel, Monday, May 14, 2018. (Photo: AP)

Even as a direct US presidential directive relocated the American embassy from Tel Aviv to the disputed city of Jerusalem, symbolically acknowledging it as the de facto capital of Israel, thick clouds of toxic black smoke from burning rubber tires billowed over Jerusalem and the Gaza Strip, ignited by crowds waving Palestinian flags surging forward towards border fences in the Gaza Strip, signalling the commencement of another Arab intifada.

The Israeli responses were immediate and harsh. Smoke from volleys of rifle fire aimed into crowds by the Israeli Army, mingled with vertical contrails of teargas canisters dropped from above by Israeli drones. Media pictures of injured Palestinians being carried away on makeshift stretchers filled television screens all day.

To a watching world it was a graphic demonstration of iron-fisted crowd control by the Israeli security forces, circa 2018. Other events, unconnected in themselves, also occurred almost in tandem elsewhere in the world during the same approximate timeframe.

Most significant among these was the tectonic presidential decision by the United States to unilaterally “walk away” from the existing nuclear agreement with Iran, and reimpose economic sanctions earlier lifted from that country, peremptorily waving off anxious remonstrations by its European allies.

In Washington, sharp divisions within the US Senate emerged during the public hearings of the House Intelligence Committee examining Gina Haspel, President Donald Trump’s choice as the director of the CIA. The proceedings were remarkably candid for their revelations of America’s quasi-official acceptance “in the national interest” of rendition and torture by its operatives at “black sites” in foreign countries to gather intelligence and launch covert “dirty war” operations against countries like Russia, Iran, China and North Korea, which are perceived as the current “axis of evil”.

These events, whether in the Gaza Strip or the US Senate, were all disquieting to America’s allies and opponents alike, and collectively contributed to an atmosphere of heightened international tension reminiscent of the Cold War, which has undoubtedly touched India as well.

This is the background against which the Government of India, on the urgent representation from chief minister of Jammu and Kashmir, ordered the Indian security forces operating against separatist militants there to ease up their operations while yet another offer was made for a month-long Ramzan ceasefire in the Kashmir Valley. In making the offer, the government had to consciously override strong objections and opposition from the Indian Army as well as its own intelligence community, who strongly felt that going by past experience, this would only offer a breathing space for jihadi groups to recuperate, rest and regroup. And this is exactly what happened.

Across the Line of Control, the ceasefire was rejected by Sayeed Salahudeen and the United Jihad Council based at Muzaffarabad in Pakistan-occupied Kashmir. The Indian Army was also not too unhappy because it allowed opportunities to follow up hot trails before they got too cold. Successful operations had already eliminated a large number of militants in the current year and the Army wanted to continue and follow up the hunt.

The vivid media images of the Palestinian intifada in the Gaza Strip, projected on television screens worldwide, were watched by audiences on the subcontinent too, including in the Kashmir Valley. Some whose heart beat for Pakistan may choose to take inspiration from the pall of black smoke over the Gaza Strip. But the lessons to be drawn really pertain to India.

The offer of a Ramzan ceasefire aside, will the Government of India respond to Pakistan-sponsored terrorism in Kashmir with a matching “maximally calibrated minimum force” if an “escalated intifada” is ordered by Sayeed Salahudeen and his cohorts, the United Jihad Council? There may also be a possibility that Pakistan will again seek to exploit the Palestine intifada and attempt to reopen the Kashmir issue with the Organisation of Islamic Conference (OIC). This had occurred earlier, and was bluntly rejected by India before the same body. On its own part, India must remain wary and be prepared for Pakistan attempting an updated replay of its 1965 “Operation Gibraltar”, combining massive intifada-style civil disobedience inside Kashmir, with trans-LoC violence by the Lashkar, Hizbul, Jaish, the newest entrant — Islamic State, together with other similar assorted derivatives.

At the other end of the spectrum was the unequivocal reiteration at the hearings by Gina Haspel, (since confirmed as the director of the CIA) that under her leadership the CIA would continue to pursue undeterred its national responsibility of “protecting the American people” by conducting intelligence and covert activities across the world. CIA activities within the country are of course nothing new for India, but an issue which reminds the government of the need for constant vigilance amongst India’s counter-intelligence agencies “to protect the Indian people”, even at a time when the country’s political leadership is desperately attempting to become a “natural ally” of the US.

Intelligence is a black art regarded by some as almost akin to witchcraft. When spymasters of yesteryears choose to co-author a book, it is likely to be an explosive money-spinner, which the market would eagerly lap up, particularly if the authors in their time headed RAW and ISI — the opposing covert agencies of India and Pakistan respectively. Two such personalities have chosen to co-author a book, The Spy Chronicles: RAW, ISI and the Illusion of Peace. In intelligence circles, much value is placed on spycraft, but speaking from a purely Indian perspective, such bonhomie, however grudging, between opposing intelligence professionals might be difficult to explain to the ranks of the special forces who carried out the retaliatory surgical strike in the wake of the Uri incident or the Rashtriya Rifles who stalked and eliminated Burhan Wani in Sopore. There are many things which are best left unsaid.