Then comes Baba Ramdev, the yoga billionaire, whose phenomenal growth as a brand would challenge any Harvard case study group. 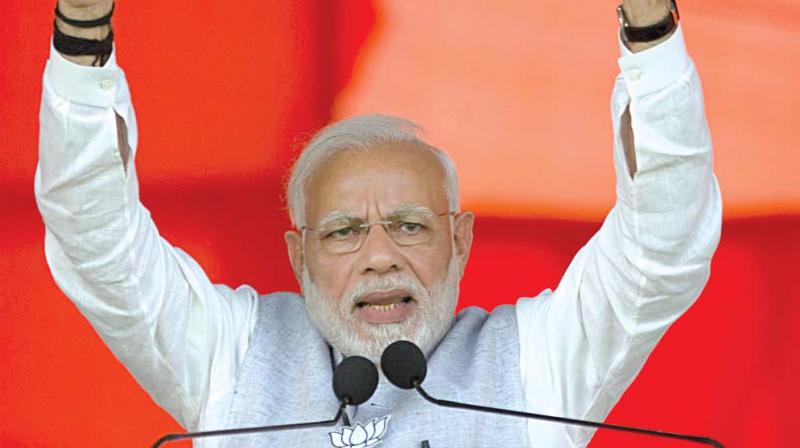 Nobody but nobody — least of all those pompous political pundits in Dilli, could’ve anticipated the new twist in the BJP narrative. Suddenly, the names of two unusual players have popped up in serious drawing room conversations in the capital, and there are signs of general nervousness all around. First it was Nitin Gadkari who shook up the establishment and caused much mayhem in the corridors of power. Just as his bold statements were being minutely dissected and digested by the BJP high command (an amazing team of one plus one!), along came Baba Ramdev with his bombshell. For those who are clueless, here’s a brief recap: Mr Gadkari dared to articulate what the majority feels. He suggested that the BJP’s dismal performance during the three recent state elections pointed to poor leadership and its inability to read the signs. He rightly talked about the onus being on leaders to better monitor goings-on at the state level. He suggested it was the fielding of weak candidates and utter confusion that led to the  BJP losing to a far more aggressive and better organised Opposition. This salvo was read as a direct attack on the PM and his lack of vision. In other words, Mr Gadkari bluntly said the buck stopped with the man with the white beard. Yes. Mr Gadkari broke a huge taboo, without directly naming the Prime Minister. He “clarified” later that his quotes had been misconstrued. Utter rubbish! Mr Gadkari must have known exactly what he was saying and why. He is too seasoned and canny a politician to let such a faux pas slip out carelessly. Since it had the desired effect in political circles (read: jubilation within the Congress Party), it was deemed a fait accompli all the way. No matter how vigourously Nitin denied he had attacked PM Narendra Modi’s leadership, that is precisely how his comment was read and perceived. This sent out a strong signal to Mr Modi’s ever increasing critics, that the strongman had finally met his match in Mr Gadkari. And so desperate are we for an alternative to Mr Modi, we promptly jumped the gun, applauded the Gadkari quote and concluded that Mr Gadkari had thrown his topi into the ring as the BJP’s prime ministerial candidate. Why ever not? If that was the intention, Mr Gadkari has staged a major coup. He has shown zabardast guts by challenging the position of the supremo. This is how a healthy democracy should function. And it would be shortsighted, even wrong, to “punish” Mr Gadkari for his derring — do. Surely the party’s interests are bigger than any individual? Surely, the BJP wants to form the next government? Surely, people within the party are aware of the growing disenchantment with the Narendra Modi-Amit Shah dominance? There is nothing all that terrible about ambition — Mr Modi should know that better than most. Mr Gadkari does not have to be penalised or cut down to size for “inadvertently” opening his mouth.

Then comes Baba Ramdev, the yoga billionaire, whose phenomenal growth as a brand would challenge any Harvard case study group. There is zero explanation for Mr Ramdev’s fortunes touching the stratosphere in such a short time. It was accepted by all that without political patronage, Ramdev’s balance sheets would look far more modest. Today, he may be one of the wealthiest Indians — without any checks and balances to spoil the show. His multiple products are widely distributed and sold, and in a span of under five years, Baba Ramdev has established himself as an instantly recognisable personality — a major celebrity of the sub-continent. Of course, he himself never tried to disassociate his fame and fortune from the ruling party. He was seen as a BJP brand ambassador, with unlimited access to money and power, to say nothing about his ever-burgeoning business empire and riches. So… when such a person, the pet of the BJP, turns around and openly speculates about the identity of the next Prime Minister, alarm bells clang across the political landscape. “How could he?” ask loyalists, shocked out of their skulls at the man’s audacity. Well, he could. And he did. And so far there has been no official response to his views.

If two men with entirely different positioning within the party hierarchy can go forth and question the leader, it is definitely time for the BJP to get into a huddle and figure out a fresh strategy before it’s too late. There is hardly any time left for the moment of truth — before we know it, the general election will be at our doorstep. These guys may be in for a major jolt — a reality check like no other. Mr Modi himself needs to take a little time off to introspect and come up with a plan that’s in the best interests of the party. For that to happen, what’s needed is a long-term, unselfish vision. If he can possibly put his monumental ego aside, and take a more consultative approach to keeping the party cadre motivated, he may still be able to pull it off next year. This is the right time to consolidate and regroup. If Nitin Gadkari is seen as a better, more acceptable prime ministerial candidate, so be it. The BJP should take the risk and make it official. Today’s voter cannot be fooled or distracted with ambiguity. It’s best to place all the cards on the table, be upfront and take the big gamble. Mr Gadkari has a pretty good track record and is known for his efficiency and dynamism. In many ways he is like Sharad Pawar — a shrewd tactician. Poor Sharad Pawar longed and longed to occupy the prime ministerial gaddi — but it eluded him. Maybe Nitin Gadkari has a better horoscope?

Have an action packed 2019, readers. See you next year… with a brand new Prime Minister! And … don’t laugh… it may be a woman! Happy New Year!

Readers can send feedback to www.shobhaade.blogspot.com