Opinion   Oped  29 Sep 2019  The cast-iron shackles of caste that act to bind us
Opinion, Oped

The cast-iron shackles of caste that act to bind us

The juxtaposition of these two images show that caste is one of the structural pillars of new India. 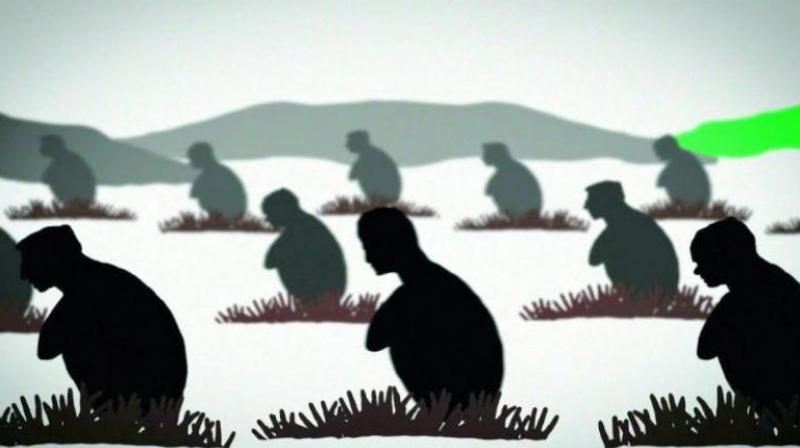 Two little children are lynched while s***ting because, as poor dalits, they have no toilet at home.

Prime Minister Narendra Modi does a photo-op with dalit women segregating waste as part of his sham campaign on national cleanliness. Two little children are lynched while s***ting because, as poor dalits, they have no toilet at home.

The juxtaposition of these two images show that caste is one of the structural pillars of new India. Caste in India is the capital for development, manure for agriculture, fuel for movement, law for any social interactions, spiritual for any religion, polity for politics. Caste is the germ that causes life in this country, it is the weapon to belittle, subjugate, ostracize, lynch and kill those who either historically walked out of the varna system or were forced to stay away through various inhumane work patterns. Varna is a meticulous system to enslave people and control their capacities to life. Vedic religion sanctioned it religiously. Caste today is part of all religion and all units that describe so-called pluralist society.

Jati in this land has prevailed for thousands of years. Jati describes communities’ social locations, religious duties and occasional particularities. Jati upheld values of segregation and continues to do so. B.R. Ambedkar’s critique on labour should be understood in this context. He argues that the division of labourers is a matter of deeper concern than the division of labour. Jati functions as a dividing machinery. Countering and defying this is problematic for the savarna, hence the savarna is all out today to plunder the lives of dalits and adivasis at all sections of life and their capacities to politics.

As a Christian priest, I am ashamed to say how the Bible, one of the most important sources for Christian theology and faith, is so caste and gender-biased. Again, why is this? The brahmin and brahminically enlightened translators, both colonial and postcolonial, did it. Dalits are kept away from many churches, dalits and adivasis are given separate places for burial. Jati empire is an age-old brahminical plot, where the savarna as a whole gave birth to a fascist collective, the RSS, diplomatically enshrined in the BJP, furthering the fascist agenda.

Jati as a community code has described each and every aspect of life, the way we drink water, the way we handle waste, waste systems, governance, policies, the way we relate with nature, women, children, sexuality, religion, spirituality, the neighbourhood, and so on. Jati as a community code has destroyed educational institutions, healthcare, the entertainment industry, culture, traditions, politics, judiciary, business and other institutions with notions of purity and pollution that describe human life in this country.

Is there light at the end of this tunnel? Yes. Thirumavalavan in the south, Chandrasekhar Azad in the north, Jignesh Mevani in the west have dared to break the shackles of caste amidst vehement opposition. It doesn’t mean that everything is sorted out. We as vulnerable communities have to consciously make efforts to understand our wounded psyches, our thrown-awayness, our estranged, broken selves. We are not only beaten, sexually assaulted and abused (women, men and children) by the dominant blood-sucking jati parasites. We have to grapple with the vicious cycle of caste, class, patriarchy and heteronormativity within that dehumanises us and our communities.

Only then will the image of Mr Modi sitting with dalit women in the photo-op make us seethe with rage.