The words of the adhan succinctly embody the basic principles of Islam and its teachings. 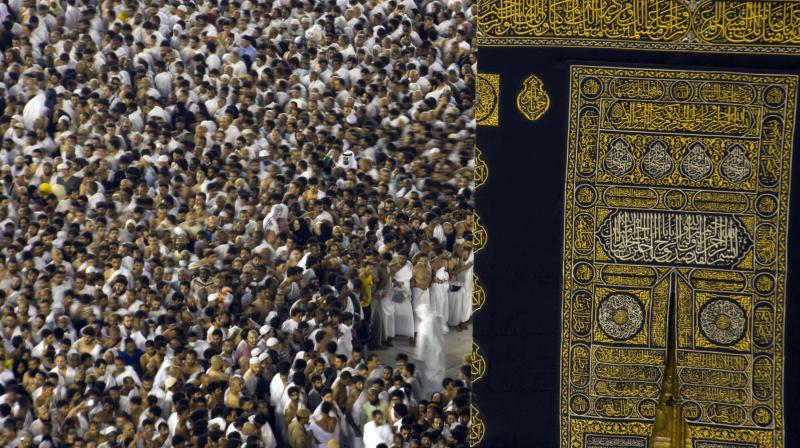 Muslims are instructed to turn to the Kaaba shrine in Mecca during prayers. (Photo: AP)

One of the most characteristic — and stirringly evocative — symbols of Islam is the adhan ((literally meaning “announcement,”, also called in Turkish: ezan), the Arabic call to prayer, dramatically intoned in a resonant cadence by a muezzin (Arabic muaddin, prayer caller) who summons the faithful to prayer, traditionally by climbing to the top of a minaret to issue his call. There is also a tradition of reciting adhan into the ear of a newborn. The root of the word is adhina, meaning “to listen, to hear, and be informed about”. Another derivative of this word means “ear”. To summon worshippers, the Jews use a trumpet and the Christians use a bell, but the Muslims use the human voice.

Prophet Muhammad’s mace-bearer and steward, Bilal ibn Rabah, an Egyptian Negro, was the first muezzin to call the adhan at Mecca. The adhan was originally a simple “Come to prayer”, and Bilal would roam the streets to remind people about prayer time. After the emigration of the Prophet and his followers from Mecca to Medina, a companion of the Prophet named Abd Allah ibn Zaid had a vision in which he tried to buy a wooden clapper to summon people to prayer. But the man who had the clapper advised him to call out to the people instead and to intone a short message. Ibn Zaid went to the Prophet with his story and he, while approving it, told him to ask Bilal, who had a marvellous voice famous for majestically sonorous renditions of the Qur’an , to perform the task. The sonorous cadence continues to stir 1.6 billion Muslims, from Morocco to Jakarta, five times a day: “Come to prayer. Rise up to your welfare!” And in the last hours of darkness just before dawn: “Come to prayer. Rise up to your welfare. For prayer is better than sleep.”

Responding to this call, praying in the mosque, and making the pledge to God is the only thing need to become a Muslim. At this point one crosses over from Dar ul Harb, the house of the pagan, into Dar ul Islam, and the house of Islam (submission). This is a very simple exercise. The emphasis is on not making a verbal mistake rather than on believing something. The prayer carpet is carried by the Muslim when he travels abroad. At the times of prayer, he will determine the direction of Mecca, roll out his prayer carpet, and say his prayers to Allah. Muslims are instructed to turn to the Kaaba shrine in Mecca during prayers.

The words of the adhan succinctly embody the basic principles of Islam and its teachings. The standard adhan can be translated as: “Allah is most great. I testify that there is no god but Allah. I testify that Muhammad is the prophet of Allah. Come to prayer. Come to salvation. Allah is most great. There is no god but Allah.” The first phrase is proclaimed four times, the final phrase once, and the others twice, the worshippers making a set response to each phrase.

With no fixed melody or meter, the sound of adhan is a function of certain linguistic features. Long vowels occur in the last words in most phrases of the adhan, and these can often be melismatically extended, while the timbre of adhan is influenced by the pronunciation of various letters in Arabic.

The adhan pervades the entire Muslim culture, and remains a highly pivotal and evocative symbol of the Islamic faith.