The team was formed on February 12, 2015 and began its work but was unable to file any fresh chargesheet. 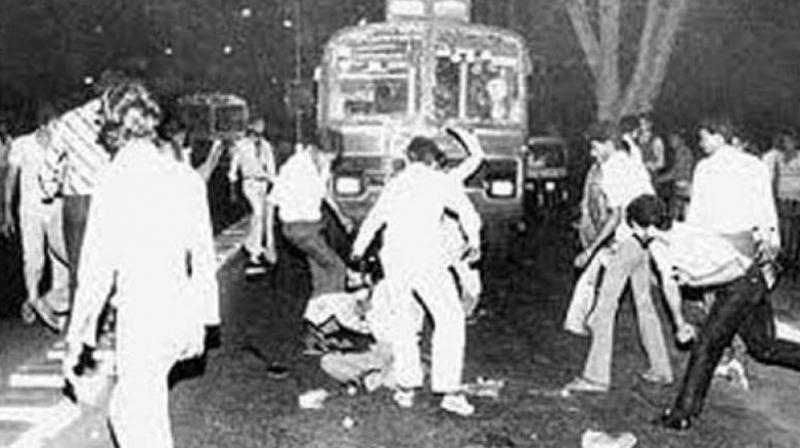 The Sikhs for Justice (SFJ) group said the grant of the compensation cannot be a substitute to the "prosecution of 1984 genocide perpetrators".

How serious is the Indian government about giving justice to the victims and survivors of the Sikh massacre of 1984? It is a question that all Indians should be interested in, because it will clarify whether or not this country can ever deliver justice in acts of mass violence.

In the slaughter that followed the assassination of Indira Gandhi, 3,325 people were murdered, of whom 2,733 were killed in Delhi alone. Powerful leaders from the Congress were named as having participated in the killings. Some of them, like H.K.L. Bhagat, have since died themselves without facing trial. Others like Sajjan Kumar, Jagdish Tytler and Kamal Nath are still around. The Ranganath Misra Commission that first inquired the massacre recorded their statements in private, in the absence of the victims, and absolved Rajiv Gandhi’s government of responsibility.

A dozen Congress and non-Congress governments at the Centre have come and gone in these 32 years, while little progress was made on the cases. The Vajpayee regime instituted the Nanavati Commission, whose report was tabled by Manmohan Singh’s government. This report made public a lot of material that was shocking, and Dr Singh apologised to the country on behalf of the Congress. Mr Tytler lost his ministry but no justice was forthcoming.

The National Democratic Alliance under Narendra Modi promised action and constituted a committee headed by G.P. Mathur on December 23, 2014 to suggest a way forward. In a matter of weeks, Mr Mathur recommended setting up of a Special Investigation Team to re-examine the cases. The SIT would access police stations and the files of previous committees, which had gathered evidence. Importantly, the team would have the powers to file fresh charges where it found evidence.

The team was formed on February 12, 2015 and began its work but was unable to file any fresh chargesheet. Following this, it got an extension in August 2015 for one year. However, by August 2016, no fresh charges had been filed. No progress report was made public and the SIT received a second extension, which now ends on February 11. It will be unfair to the victims and survivors if this deadline again comes and goes without any movement on justice.

The home ministry says that 650 cases had been registered in connection with the 1984 riots. Of these, 18 were “cancelled” and 268 case files were “untraceable”. The SIT has been reinvestigating these 286 cases. In a statement in November 2016, the ministry said that “as of now, 218 cases are under various stages of scrutiny. So far, 22 cases have been identified for further investigation. The SIT has issued public notices with regard to these 22 cases prior to proceeding further.”

The ministry says that because the first information reports were recorded in Gurmukhi or Urdu, their scrutiny was being delayed. This is difficult to believe because there is no shortage of people in India with the skills to translate these languages.

The ministry’s statement said: “The cases being very old, there has been difficulty in collating and scrutinising records... Notwithstanding the difficulties, the SIT has taken up the challenge and all efforts are being made to examine the cases minutely and due care is being taken to scrutinise the cases with a view to render justice to affected families.”

Unfortunately, there is no evidence that there has been any progress on these investigations. The organisation I work for, Amnesty India, held a conclave in Delhi last year on this subject. We have worked with several of the groups representing the victims and survivors and they have not seen any seriousness either. For example, none of the survivors who were witnesses to the crimes had been approached to re-record their statements or for any kind of examination. This is troubling because it indicates either a lack of interest or a deliberate disinclination to act. In the absence of a proper investigation, how will fresh charges ever be pressed and how will there be justice?

The usual pattern of a large Indian riot is that the party in power remains in power (unfortunately, such violence helps in mobilising communities) and so the investigation is sabotaged. This has happened many times in India, mostly under Congress rule. Now that the BJP has the opportunity to undo a lot of the damage that we have suffered as a society which looks away from mass violence. Many of the parties fighting the Punjab elections that are about to take place have agreed to add in their manifesto the promise that they will act on justice for 1984 and that is a good thing.

However, the instrument is already available to the Union government today. It should not give another extension to the SIT and make public a progress report.The old Indian line of “tareekh pe tareekh”, infinitely denying justice, would be tragic if used once again in this instance.