The iconic advertising board at Piccadilly Circus went blank. Theatres had to cancel shows and pay their customers back. 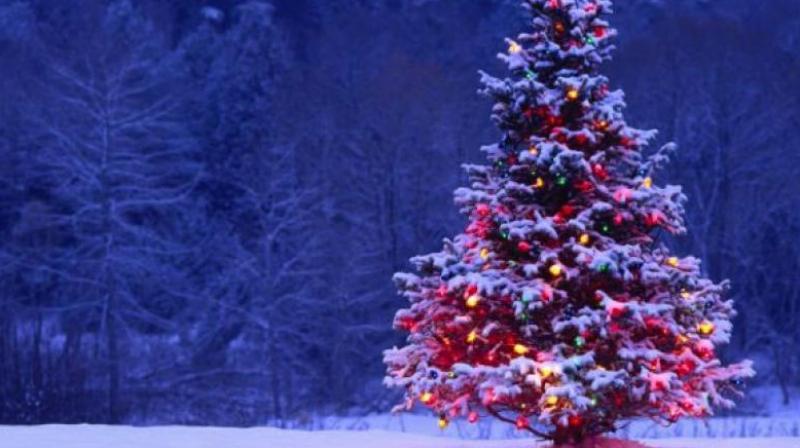 The lights went out all over the West End and Black Friday became a reality.

Winter is here. The days are getting shorter and nights colder. But Christmas cheer pervades along with the illuminations on Oxford Street. And nothing can warm you up as much as shopping. I should say shopping on Black Friday!

Thanksgiving is a completely American import, an excuse for shops to get rid of all their unsold stock just before restocking for Christmas. Of course, Black Friday began on the previous Monday. In the past, the shops opened at 5 am to accommodate the long queues. So this year too there were expected to be 14 million shoppers breaking down the doors. But most shoppers stayed online. (India is not the only country turning to the power of plastic). Just as this revolution happens abroad, it is in the interest of the industry to ensure their customers are connected to the Internet or they will lose them to those who are. John Lewis, for instance, had orders every five seconds between 8 and 8.30 am. Shops stayed open but empty with very few customers turning up. Taking a lesson from worldwide trends, let’s not slam demonetisation but try to ensure that those who are outside the world wide web now get connected super fast. The world is turning away from cash, and why not?

In any case, Brexit or no, we are determined to have a good time. Of course, in the hurry to grab a bargain, many buy what they don’t really need, but who is complaining? Eventually it will all land up on eBay and on second-hand online stores.

However in the evening, a funny thing happened. The lights went out all over the West End and Black Friday became a reality. The iconic advertising board at Piccadilly Circus went blank. Theatres had to cancel shows and pay their customers back. Even traffic lights were out but luckily the Underground did not have a power outage. Restaurants in the shopping districts closed early. This is highly unusual, or so one hopes!

The sorry but also brave story of the 14-year-old girl who had cancer has captured everyone’s imagination. She convinced her parents to preserve her body cryogenically so that in 200 years when a cure for cancer has been found her body can be unfrozen and she can have a healthy life. It is a daunting experiment. The religious say she should have let her body die and saved her soul for eventual rebirth. But why not try what science can offer? I had first encountered cryogenics when I was writing my book on surrogacy, as surrogate mothers are often impregnated with embryos that have been preserved in liquid nitrogen. That too is a largely unregulated industry as is cryogenics. Perhaps it is time to regulate and ensure that proper procedures are followed as according to the reports the girl’s mother was upset with the way it was done.

Buckingham Palace is Falling Down, my Fair Lady. Not quite. But it will need extensive repairs and restoration. It will cost £455 million. The government has said it would pay. It derives its income from the Crown Estate while the Queen gets to keep a portion herself as her privy purse. There is the usual outcry that the royal family should pay for their palace. But few understand that the Crown Estate has been given over to the government in return for an arrangement whereby the royal family gets an annual settlement. The repair of Buckingham Palace is not the Queen’s responsibility. But there will always be people who do not want to hear the logical argument. So this will run and run.

Sadly we have had to relive the murder of Jo Cox MP. Her killer just received a life sentence. The murder was shocking enough as she was a popular and conscientious MP who was going to spend that day in her constituency sorting out problems. The killer showed no mercy as he shot and knifed her. It turns out that he collected Nazi memorabilia and had racist posters in his home. Even so, he had such a sad life that Brendan Cox, Jo’s husband, said: “We feel nothing but pity for him; that his life was so devoid of love that his only way of finding meaning was to attack a defenceless woman who represented the best of our country in an act of supreme cowardice.”

There has been much amusement at US President-elect Donald Trump’s suggestion that Nigel Farage be made UK ambassador to the US. Mr Farage was supporting Mr Trump even before the election and was among the first few from the UK to meet the President-elect. The government is apparently appalled by the idea and ruled it out. Mr Farage has laughed it off as he just celebrated the Brexit victory as well as Mr Trump’s election at the Royal Cafe in Piccadilly. He has even been presented a large gold plate of Ferrero Rocher, the “chocolate of choice”. He said he will migrate to the US as soon as his term as a member of European Parliament ends. I don’t hear anyone complaining about that!