The nine devis originate from these three devis which, in turn, have their origin in Adi Shakti. 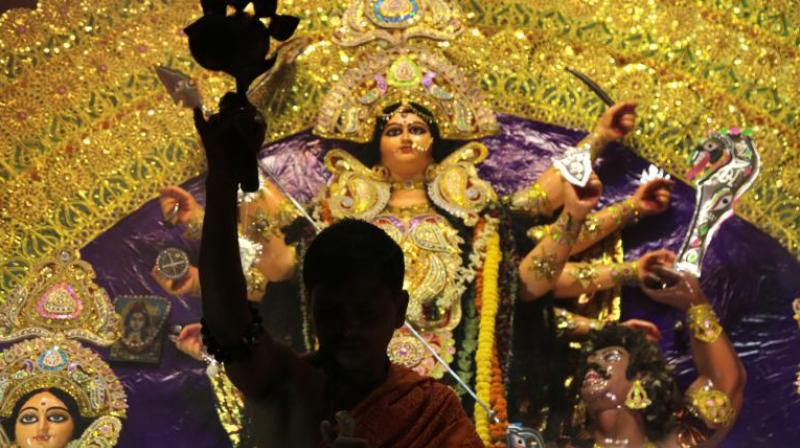 A Hindu priest worships before an idol of goddess Durga with oil lamp during Durga Puja festival in Kolkata, India. (Photo: AP)

The nine days and nights of Navratras mark nine different aspects of Shakti — Shailputri, Brahmcharini, Chandraghanta, Kushmanda, Skandmata, Katyayani, Kaalratri, Mahagauri, Siddhidatri and Aparajita. Shakti is that creates, preserves and also destroys. For a beginner, these may be broadly understood as triple forces of Durga, Lakshmi and Saraswati. The nine devis originate from these three devis which, in turn, have their origin in Adi Shakti.

The first three days are dedicated to Devi Durga. She is the devi of spiritual evolution and governs the transformation of universe, also called Yogmaya. She is the consort of Lord Shiv. In the human body, she corresponds to the tamas guna and region from chest to head. During these days sadhak stops having spicy food and performs a havan in morning and evening sandhya with chants invoking Maa Durga. Offerings of kala til along with ghrit are made and desi cow’s upla and palash samedha is used.

The next three days are dedicated to Devi Lakshmi. She governs and preserves physical creation and its various aspects, also called Maya. She is the consort of Lord Vishnu. In human body, she corresponds to the rajas guna and region between navel and chest. In these days, sadhak stops intake of anna and only light foods are ingested in order to keep the body light. Havan for Maa Lakshmi is done at the two sandhyas by making offering of a sweet along with ghrit.

The last three days are dedicated to Devi Saraswati. From her emanates gyan and all forms of arts, she is the devi of creation, also called Mahamaya. She is the consort of Lord Brahma. In human body, she corresponds to the sattva guna and region navel downwards. In the last three days, the sadhak only consumes water and juice and havan for Ma Saraswati is performed at the two sandhyas by making offerings of ghrit and guggal.

On the 10th day, Maa Durga or Maa Kali is invoked as on this day Lord Ram defeated Ravan.