It wasn’t easy, given the myriad obstacles in her path, but she made it seem like it was. Her legacy in a very real sense will be remembered for long. 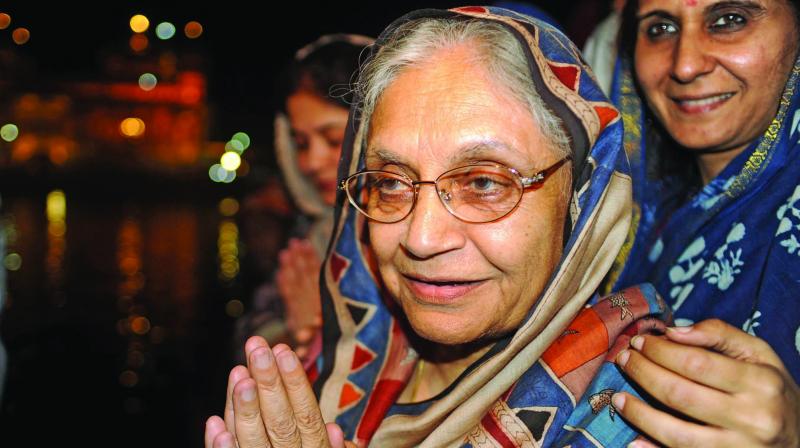 Dicky” was Sheila Dikshit’s husband who passed away too young. This column can now reveal (given that both the wonderful elements of that power couple have passed on) that he was, during his days, one of the best sources you could find on the inner workings of the Indian bureaucracy.

Belonging to the Uttar Pradesh cadre, which had ruled the roost for many years and, in some senses, still does despite the gathering strength of the Gujarat cadre, Dicky was a man who actually knew everything. Also, remember that during those days, joint secretaries were the real powers, as those who know the system even today will acknowledge. “Modi”-fications have eaten away at this but the power lines are etched in stone.

Being the son of the revered freedom fighter and Congress leader Uma Shankar Dikshit, who had been close to Jawaharlal Nehru, a member of Indira Gandhi’s Cabinet and governor of West Bengal and Karnataka, Dicky was born into the upper elite of the heaven-born.

His wife Sheila, who became a friend, early on, was the well informed and ever warm hostess to her husband’s colleagues, all of whom would gather in modest residences that babus even today still occupy in Lutyens’ Delhi.

This early initiation into the ways of the bureaucracy stood Sheila rather well during her stint in the Rajiv Gandhi Prime Minister’s Office and, of course, much more crucially during her 15 years as Delhi’s longest-reigning chief minister.

Delhi’s bureaucrats are twice heaven-born because when they are in Delhi, they run the little nooks and crannies of administration that don’t really signify much except for headlines. But the fact that being the widow of a bureaucrat and someone who had vast political connections helped Sheila manage the usually recalcitrant and well-connected babus who are at the top of the Delhi administration. Her grandmotherly warmth, being a source of infinite wisdom and genuine caring for each person’s extended family were things that even her own bureaucrats talk about today. It was touching to see powerful men weeping when condoling with her family.

The relationship between politicians and babus is utilitarian at best but mostly awkward, in which both vie to wield power entrusted upon them to do public good. But with an innate feel of the public pulse and an unshakeable belief in her ability to govern an administration, Sheila easily stood out as a strikingly appealing leader.

The public outpouring of grief in Delhi and its wide coverage in the media for one who held no office at death may have left some feeling bemused, but was no surprise to the ordinary Dilliwallas, party colleagues, political rivals, friends, bureaucrats and admirers.

Many of those who paid fulsome tributes were also former bureaucrats, many who had worked with her during her three consecutive terms as chief minister and had a ringside view of her administrative acumen and redoubtable leadership.

Certainly, it was her adept marshalling of the Delhi administration that made the transformation of Delhi from a smog-heavy, traffic-choked city into a cleaner CNG-powered greener city possible.

It wasn’t easy, given the myriad obstacles in her path, but she made it seem like it was. Her legacy in a very real sense will be remembered for long.

Perhaps fittingly, therefore, her funeral marked a rare moment of political amity as leaders from all political parties, bureaucrats across ranks and ordinary Dilliwallas turned up to mourn the passing of a remarkable life.