Opinion   Oped  28 May 2018  On lingering frenzy over royals, and an Anglophile Khushwant
Opinion, Oped

On lingering frenzy over royals, and an Anglophile Khushwant

Khushwant Singh’s affection for the undivided India in which he was born, was well known. 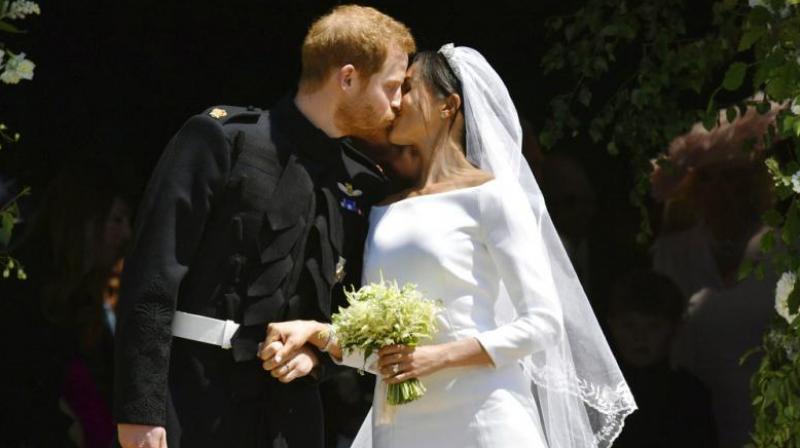 Prince Harry and Meghan Markle leave after their wedding ceremony at St. George's Chapel in Windsor Castle in Windsor, near London. (Photo: AP)

We are still recovering from that wedding on May 19. There were many crises as is normal before any wedding. Will Meghan’s father come? Will her relations make a scene and embarrass her? Will her in-laws, the royals, treat her parents properly? Usual worries before a wedding except that this one was being watched around the world.

In the event, it went off superbly. It was as if all the hundreds present — the bride and groom, the pageboys and girls, the celebrities (behaving soberly), the crowds outside and of course the groom’s side — had been rehearsing day and night to get it right. There was the dramatic sermon by Michael Curry, a rare sight of a black evangelical preacher in a staid Anglican ceremony. For a while we thought he may be stopped midstream as he was taking a bit long. But it was amazing theatre. The gospel singers, not previously seen at a royal wedding, the dignified behaviour of Meghan’s mother Doria, the generous gesture of Prince Charles escorting Meghan in the church in place of her absent father and then offering his arm to her mother as they all left the church. It was a genuine multi-racial event reflecting how far the country, including the royal family, has come since the wedding of Charles and Diana 37 years ago.

Now we have the coat of arms of the new Duke and Duchess of Sussex. It is an American or perhaps a “California” takeover of the British royalty. A coat of arms can be had by any one with a peerage or higher title. (Even we could get one, I guess!) It is meant to tell the story of the family whose title it is and then you can add some personal elements. In the coat of arms of Harry and Meghan, there is a hint of California sunshine as well as California golden poppies representing her state, celebration of the powers of communication which her career embodies, and of course Harry’s connection with the realm. Meghan has promised to be a feminist. This story will run and run.

We had a special thrill in London with the celebration of the Khushwant Singh Literary Festival. This is normally held in Kasauli where Khushwant spent time every year. For the first time, it had come to London, his favourite city. Khushwant had studied in Kings College, London and worked here. He was, as he had often said, an Anglophile. So we had a joyous afternoon in the Mayfair Hotel with Rahul Singh welcoming us with stories about his father. Rachel Dwyer, our local expert on Bollywood, helped Rahul to compère the event.

There was a session titled “Not a Nice Man to Know” (Khushwant’s self-description) where Jaishree Misra, Seema Anand, Neelima Dalmia and Imtiaz Dharker recalled how helpful Khushwant was when they were just starting their writing careers. And I can vouch for the fact how much he would cajole or harangue me into writing as well.

Given the current fashion for Empire-bashing in India, the session chaired by Zareer Masani was a loud affirmation of the many contributions of British archaeologists and many amateur linguists and historians who helped Indians rediscover their past. Professor Rosie Llewellyn-Jones showed some beautiful paintings from the Company days depicting Indian life. Charles Allen, who wrote the superb biography of Ashoka, told us about archaeologist Alexander Cunningham and his discoveries. John Keay is another historian who is an Anglophile. He added to the stick of information about British contributions to unearthing ancient Indian history.

The final session was chaired by well-known journalist and author Mihir Bose. He was in conversation with Meghnad Desai and Dilip Hiro. They discussed Indian democracy and the global geopolitical scene. Then it was the time for paying tribute to Khushwant Singh in a manner he would most approve — a drinks reception. A large malt whiskey please, as Khushwant would have wanted! Rahul Singh and his partner Niloufer has helped us all remember one of the nicest men I ever knew!

Khushwant Singh’s affection for the undivided India in which he was born, was well known. So what do we do with Pakistan playing England at the Lords? Thirty years ago, Norman Tebbit had asked for a loyalty test when England played a subcontinental side. You had to support England if you wanted to belong. Now no doubt the same is being said back home. But then in cricket one is tempted to back the better side. It seems this weekend, whether we like it or not, it is Pakistan.

But then there are more Indians than Pakistanis here. Figures released last week of the UK population revealed that first-generation immigrants from India are the fourth largest minority in the UK. Indians trail Polish, Romany and Irish. There are 346,000 India born, 188,000 Pakistan born and 84,000 Bangladesh born. Of course that is only the first generation. Add the children and grandchildren and there are well over a million of us here.