Red Corridor forces have mostly suffered when they encounter large groups of insurgents. 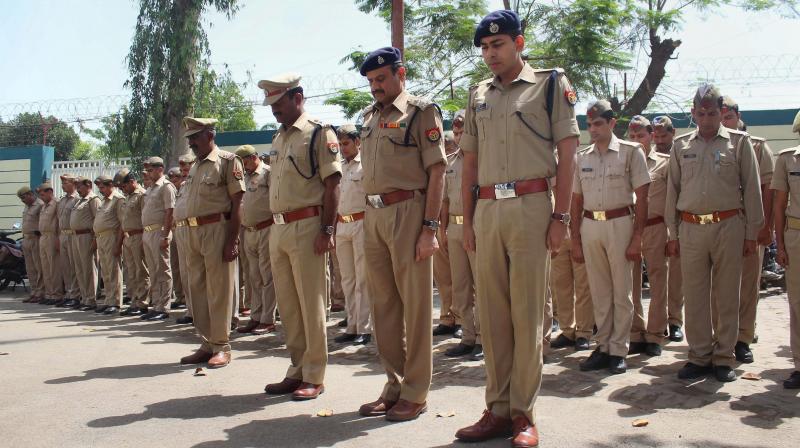 Police officers and jawans pay tribute to the CRPF personnel killed in the Sukma Naxal Attack in Chattisgarh, at the SSP office in Meerut. (Photo: AP)

Analysing a tragedy for whatever reasons must begin with an expression of regret.

That’s exactly how I look at the situation where the nation has been left frustrated yet again with a heavy loss in the security domain.

Losing 25 police personnel in circumstances much like in the past inspires little confidence in the ability of Central armed police forces and of the intelligence agencies that support them in the Red Corridor.

Amid all the patriotic fervor that accompanies the loss of uniformed personnel, the public also deserves to know why this happens so often. While doing so the colour of the uniform one has worn must not be evident; only then will justice be done. To make this into an “us versus them” affair within the uniformed services would be inherently unfair.

Even as I write an encounter is in progress in Kupwara where the Army has suffered losses. Such losses in the administrative realm, of camps and perhaps convoys, doesn’t absolve the Army and Central forces in Kashmir from the many blunders which have occurred in the recent past.

Sukma is nothing short of a tragedy. I insist on calling it that since innocent policemen doing their job and being martyred as they were not trained adequately to do that job is indeed a tragedy.

Citing former US defence secretary Donald Rumsfield, the phrase “known knowns” is most applicable here. Almost everything which goes into making such a repeated tragedy is a “known” in terms of past analyses, and we are fully aware that it is a “known”. There are some “knowns” that can’t and won’t change unless transformational decisions are taken, but it’s important to keep the public informed.

The Central Reserve Police Force has been delineated as the core or lead force to take charge of counter-insurgency operations (CI ops) across the country. Was this Union Cabinet decision, based on the recommendations of the Kargil Review Committee and Group of Ministers, correct? Is it something that should be reviewed?

Analysts are far happier quoting the decision than questioning its wisdom, or the absence of implementation. When such decisions are taken, they should be based on the capability of a force or its potential. If the latter, then the means to acquire that capability must also be delineated and orders issued. By merely recommending the CRPF as the lead force for CI ops without examining its structure, manning pattern and command and control, the Kargil Review Committee perhaps erred substantially. However, the purpose is not to assign blame; a decade and a half down the road experience itself would have repeatedly shown that in its current format and makeup it is unfair to give the CRPF such a responsibility. The “known knowns” of the force mentioned by every analyst in the past three days needs a brief recount.  Chasing nimble tribal guerrillas armed to the teeth who are fighting a “son of the soil” insurgency in a terrain they know like the back of their palms isn’t really a joke.

CRPF jawans are often 50-60 years old as the retirement age in the force is 60. It will be unfair to question it as I am unaware if the force has laid down an age limit for deployment of personnel in the Red Corridor. If not, then it is essential, and units must be restructured as Red Corridor units.

The Army’s Rashtriya Rifles is a fine model of a CI force to examine and improve upon.

The manning pattern, under which senior CRPF positions are occupied by Indian Police Service officers is too flogged an issue to repeat. The point to emphasise is that institutional awareness of weaknesses in the operational realm can’t be expected from a hierarchy completely inexperienced in training, planning or execution of such operations anytime in their service. To be parachuted into one or more star ranks and suddenly bearing operational responsibility and the lives of so many personnel under care is inherently unfair both on the IPS officers and the CRPF.

Harping on this is like begging the question, as nothing is likely to change. It is best to work around it and look at other ways of potential optimisation. Leadership, training and equipment are the three areas which need to be reviewed, other than the senior leadership question.

Most fighting entities will inform you that the best welfare for warriors is to ensure they are fully enabled in their quest to inflict maximum casualties on the adversary, and prevent casualties unto themselves. This is best done through training and professional stocktaking.

Some Red Corridor forces like the Andhra Pradesh Greyhounds have proved their capability beyond doubt, but such excellence is a drop in the ocean compared to the magnitude of the problem.

The Army’s Para SF units, particularly the ones that have operated in Sri Lanka and the Northeast, have institutional experience and strength. There are enough veteran officers and men who could be tapped professionally to impart their knowledge.

Institutions like the National Police Academy are centres of excellence which must be involved in analysis and lesson-learning in a substantive way. The plethora of experience that the CRPF and state police forces possess is itself not little.

The circumstances surrounding the Sukma event, however, do not inspire any confidence on the basics that those involved in such operations must have. Everything here is supposed to be tactical, including having meals.

Troops deployed on operations do not eat at the same time, and not without establishing security through observation posts, sentries and the like. There is obviously a real need to return to the basics, and to do so repeatedly.

Red Corridor forces have mostly suffered when they encounter large groups of insurgents.

Obviously, one of the banes of such operations is contact-based command and control and getting the sub-unit to respond beyond just returning fire. I am not sure whether training on this is ever carried out. CRPF units are most usedly to platoon-based functioning. Even the best Army units may find it difficult to have a full company-based response in the face of such situations. The fact that a full company can come under enemy action at a single time is itself a reflection of questionable field tactics. If this is to improve, egos must be shed. Smaller teams can train with Greyhounds and other successful police outfits, but if a full sub-unit response is necessary, it should imbibe the Army’s functional culture.

The immediate upgrading of equipment is vital. The Union home ministry has a very efficient procurement machinery. It must look at rotary aviation resources for recce and response. The Mine-Protected Vehicle is an imperative, and funds can’t be the reason for not provisioning this.

While the intelligence services have secured India quite well over the last many years, tactical-level intelligence in the Red Corridor still seems to be highly questionable.

I laud the BSF’s concept of G sections of its units. In all my experience, I have not found more competent intelligence personnel at the tactical level.

This is something that the CRPF should examine closely.

The writer, a retired lieutenant-general, is a former commander of the Srinagar-based 15 Corps. He is also associated with the Vivekananda International Foundation and the Institute of Peace and Conflict Studies.