Muslims in France are second after Catholics, and, estimated at five to six million, are about 10 per cent of the national population. 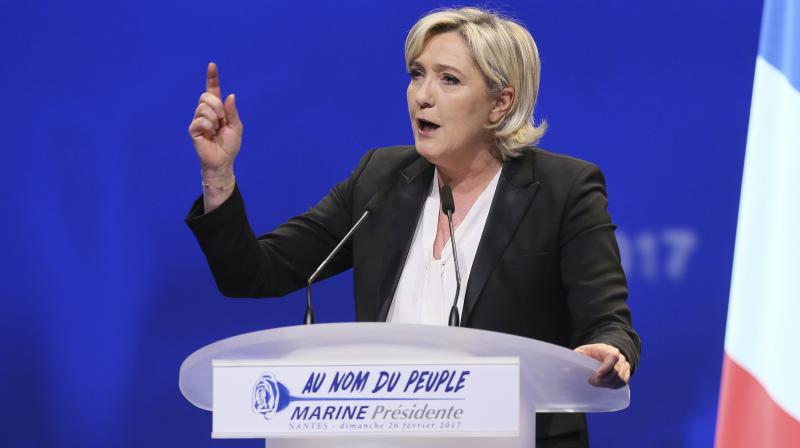 On February 20, Marine Le Pen, the presidential candidate from the far-right National Front, paid a two-day visit to Lebanon. She generally ignored the country’s two-thirds Muslim population and alienated most local politicians by setting out her West Asia policy as consisting of: no more refugees, strong affiliation with the Christian community, and support for the Bashar Al Assad government which she simply saw as the enemy of ISIS.

While Ms Le Pen was in Lebanon, her rival from the newly set-up centrist party, En Marche! (Onward!), Emmanuel Macron, went off to Algeria where he described his country’s colonial experience as a crime against humanity. This alienated the right-wing in France. (He also lost left-wing support by opposing gay marriage.)

Ms Le Pen has promised to close Salafi mosques, get rid of foreign imams and foreign funding for extremist groups, and deport French citizens affiliated with jihad. Unnoticed by most observers, her party manifesto calls for a ban on all “ostentatious” religious symbols, not just in classrooms as at present, but in all public places: this would include the Muslim headscarf, the Jewish kippa and the Christian cross. Nonna Mayer, a leading expert on the National Front and its electorate, has said that Ms Le Pen has rid the party of its long-time anti-Semitic image, but has made Islam the enemy.

Ms Le Pen’s platform, sternly nationalist and anti-immigration and avowedly anti-Muslim, has surged in national appeal over the last two years, so that her party, with 30 per cent of the popular vote, was in first place in the 2015 regional elections. She is now the leader in the presidential campaign, with a 26 per cent vote share, and has a 93 per cent chance of getting to the second round, though she could be defeated in the run-off by the Opposition combining against her.

This burgeoning appeal of the National Front is clearly a reaction to the Charlie Hedbo attacks in January 2015 and the Paris attacks in November, which have now defined the country’s Arab Muslims as the violent and despised “Other”, and made immigration and “Islam” major issues in the presidential contest. Everything associated with “Islam” is now up for debate: the headscarf, the burkini, the setting up of mosques, halal food, the association of Islam with terrorism, and even the shaky performance of the North African footballer, Karim Benzema.

Observers have questioned whether Ms Le Pen should be described as “far right” since her views are held by the other right-wing candidate, from the Republican Party, Francois Fillon, who has also promised to curb immigration and conserve France’s conservative values, saying: “Our country is not a sum of communities, it is an identity.” He also noted that Catholics, Protestants and Jews did not denounce the values of the Republic, unlike the followers of a certain other religion, an obvious reference to Muslims.

In terms of the number of worshippers, Muslims in France are second after Catholics, and, estimated at five to six million, are about 10 per cent of the national population. Immigrant Muslims from North Africa were the builders of France after the war. However, as they lost their jobs in the 1970s when industries were shut down and they slid down the economic and social ladder, they also lost their links with mainstream French culture and institutions.

Most Muslims now live in banlieues, the poor suburbs, where unemployment is 40 per cent, road and rail links to the capital are non-existent, the residents lead ghettoised and excluded lives, and often face racial and religious discrimination. They also suffer attacks on mosques and hijab-clad women and often Muslim graves are desecrated.

France has changed over the last three decades. In the 1970s, while there were confrontations between Arab youth and police, Islam was not dragged into the fight. But the Muslim underclass, leading squalid lives in the suburbs of metropolitan centres, gradually came to find a sanctuary and identity in Islam. Observers note that in the riots of 2005 in banlieues across France, Islam became the “identity bearer” of the marginalised Muslim youth against the society that had no place for them.

Since 2005, hundreds of France’s Arab youth have flocked to join extremist groups in West Asia, particularly the ISIS in Syria, of whom about 200 are believed to have returned home. More seriously, the messages put across by ISIS on social media have encouraged some Muslim youth to perpetrate violence against soft targets in France. In most instances, these persons had shown little religious zeal earlier and had no contact with extremist groups in West Asia. Their profiles show them as under-educated and without regular employment, generally social misfits, with anger management issues and history of domestic violence.

One major victim of burgeoning French xenophobia could be the European Union (EU) itself: 60 per cent of the electorate have negative views about the bloc, while 80 per cent are hankering for a “strong leader willing to break the rules” to save the country. Ms Le Pen, who sees herself as “building a new world”, reflects this aspiration most effectively; her EU exit approach includes: immediate negotiation to a return of borders, rejection of the Euro and a return of the franc, “economic patriotism” to protect French jobs and industry, and freedom to pass laws that are not influenced by directives from Brussels. Within six months of winning the election, Ms Le Pen proposes to call a national referendum: she will counsel remaining in a “new Europe” if her negotiations are fruitful, or will advise bailing out, as Britain has done.

The French electoral scenario has just been further complicated with a website and poster campaign by four Parisians who have chosen to show their dissatisfaction with the present lot of candidates by promoting former US President Barack Obama as a candidate in the French election: they have already obtained 30,000 supporters.