A giant who inspired the world

Fidel Castro’s greatest contribution to his country, his continent and the world was to wrest independence for Cuba. 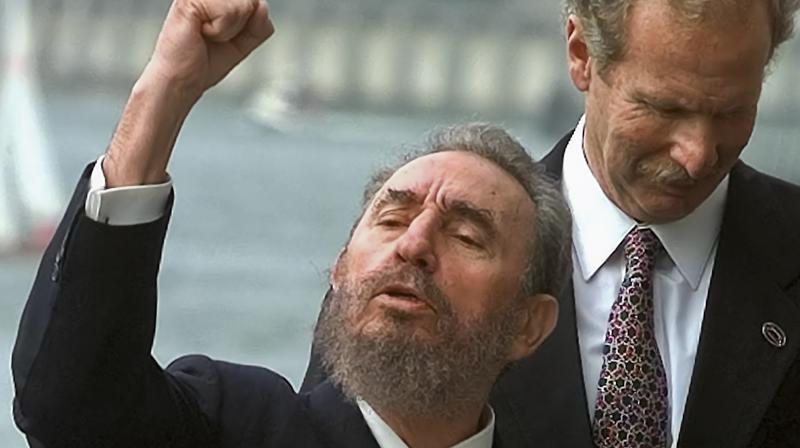 A file photo of Cuban revolutionary leader Fidel Castro (left) shouting a slogan as he raises his fist during the VIII Ibero-American Summit group picture in Oporto in 1998. (Photo: AP)

Of all the revolutionaries of a bygone era Fidel Castro, who died at 90, was the most romantic and influential leader of the 20th century inspiring millions of people in Latin America and the world for generations. By unseating dictator Fulgencio Batista in January 1959, he struck a blow at United States’ neo-colonialism in the southern continent, which was the rule rather than the exception.

Fidel, as he came to be universally known, never forgave the US for its policies in relation to his country and the rest of the continent. Even after President Barack Obama paid a visit to Cuba in 2016, the first sitting American President to come after 88 years, following his revolutionary move to normalise diplomatic relations, he posted an irreverent response denigrating Mr Obama’s overtures of peace and said that Cuba did not need anything the US offered.

For a country of 11 million people in the Caribbean island, Fidel the Maximum leader, as he was known, played an outsized role in the world. Those were the days of the Cold War and even as the US supported the failed Bay of Pigs Invasion in 1961, the Cuban missile crisis the following year — the impending arrival of ballistic missiles from the Soviet Union — took the world on the verge of a horrendous crisis until a compromise was worked out.

Fidel had supporters of the eminence of Che Guevara and millions of ordinary men and women inspired by his then young bearded face as an indomitable guerrilla fighter. He had no option but to align with the Soviet Union and although he adopted Communism, it was never of the Moscow variety, his followers preferring to call themselves Fidelistas. Fidel ruled with an iron hand although he gave his people free healthcare, housing and schooling. And he sent his troops to crisis-ridden Africa to fight wars on the continent.

Fidel seemed to live a charmed life surviving several American-inspired attempts to assassinate him, some of them bizarre. But his real test came with the dissolution of the Soviet Union when financial subvention and support from Moscow stopped. Those were hard days for Cubans but Fidel hunkered down and survived them even legalising the US dollar as a currency until after the crisis was over.

Fidel was taken seriously ill in 2006 but it was two years later that he formally transferred his presidential power to his brother Raul who ultimately brought about changes in his country’s policies the Maximum Leader frowned upon.

Historically, Fidel was a giant of a man who lived his dream of freeing his country from neo-colonialism that prevailed in his continent under the hegemonic power of the United States. Those were the days that Washington was at the peak of its power. And here was a plucky leader fighting the giant for his country and continent.

Those were also the days when Jawaharlal Nehru’s non-aligned movement was flowering, with Fidel a major attraction along with then Yugoslavia’s Marshal Tito seeking independence from Moscow. The movement itself, now largely moribund, was the developing countries’ response to the dictates of the world’s division into two camps.

In the vastly changed world of today, it is hard to imagine the stresses and strains of developing countries undergoing the dilemma of emphasising their independence of two opposing world capitals. But the past was also the time that produced giant leaders. Although the paths to power of men like Fidel and Nehru were totally different, their aim was to safeguard their countries’ independence to the best of their ability.

Perhaps Fidel’s greatest contribution to his country, his continent and the world was to wrest independence for Cuba from being a client state of the United States and figuring out how to bring prosperity to his people. For the liberals, this prosperity in relative terms came at the expense of liberty, but that was a bargain Fidel was ready to make.

India’s path was, of course, different, but that is another story. Fidel’s death is a reminder that a giant of a man died for his country’s cause. His personality quirks do not take away his greatness and the inspiration he provided to millions to fight their own battles. He was fond of making long speeches that would last a whole night and would easily beat the so-called argumentative Indian in his stamina.

Fidel’s long reign in Cuba saw several US Presidents come and go but he remained at the helm until illness felled him. In sickness, he became a recluse although he kept up a running commentary on events at home and abroad.

In many ways, Fidel was unique and although US reaction will be mixed, given the historical context, many will mourn the loss of a leader like no other, leaving his giant-sized imprint on the world.