What has been the result of the Congress grappling with Hindutva in Bhopal or flirting with it in Kerala? 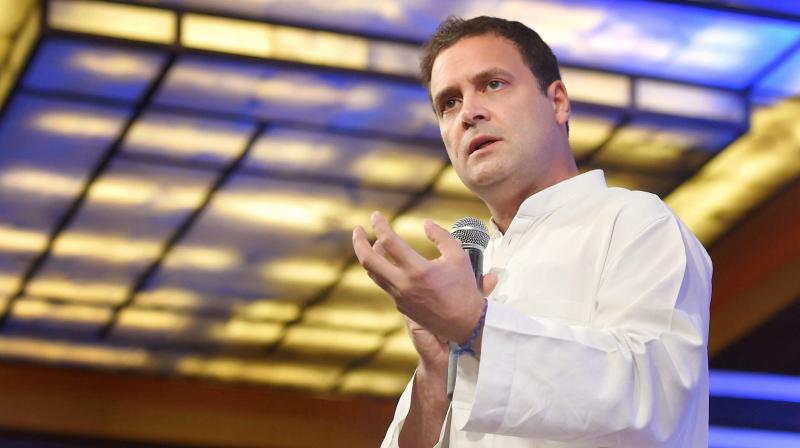 Indian intellectuals who endorsed ideas of India which events since 1947 have belied must be a trifle nervous about the advent of new approaches to recent Indian history. How indistinguishable the Congress ideologically is from the BJP was the theme of a recent article by French scholars Christophe Jaffrelot and Gilles Verniers in a national newspaper with the apt headline “Congress and BJP: Tweedledum and Tweedledee”. The Jaffrelot-Verniers duo have, for their laboratory, focused on Gujarat — on how leaders have swung from one side to the other, repeatedly, like trapeze artistes in a circus.

I suspect this is the beginning of a wider research as the Tweedledum-Tweedledee image is applicable to all regions wherever there is some Congress presence. In most places it looks like the BJP’s B-Team, and has conceded spaces to it for that very reason. I hear Rahul Gandhi and his cohorts are giving thought on how to banish this image. But can he? He started the Gujarat campaign from a Hindu temple, just as Rajiv Gandhi did in the 1989 campaign from Ayodhya, promising Ram Rajya.

In recent decades there have been two distinct postures the Congress has struck towards the BJP. In Madhya Pradesh, under Arjun Singh and Digvijay Singh, it has taken the BJP head on. There was no other force to combat.

In Kerala, particularly under K. Karunakaran’s chief ministership, it turned to the Sangh Parivar whenever help was needed for battle with the Left. In fact, Mr Karunakaran was a master at ambidextrous politics. On one occasion in Kozhikode, he manoeuvred the Congress, BJP and Muslim League on the same side to defeat the CPI(M)’s T.K. Hamza.

What has been the result of the Congress grappling with Hindutva in Bhopal or flirting with it in Kerala?

State and district level Muslim Congress leaders I met last week in Indore, Dhar and Mandu, painted a dismal picture. Their party’s high command in New Delhi or Bhopal took them for granted. “The TINA factor applies to us,” lamented Mohammad Kamran, a Youth Congress leader. When a Muslim-majority village was gutted, no “senior” (read Hindu) Congress leader even turned up.

The circumstances in Rajasthan are similar. When 10 Muslims were shot dead by policemen in Gopalgarh in 2011, an hour’s drive from Delhi, neither Rahul Gandhi nor home minister P. Chidambaram considered it worth their while to visit despite several delegations imploring them to do so. This was the first instance in India of police firing inside a mosque. Is Sachin Pilot listening?

In Kerala, the frequent Congress dependence on sectarian groups has led to slowly opening the door just enough for Hindutva forces to bid for replacing the Congress. That this process is slow is attributable to the state’s distinct and enlightened social structure. But a soft saffron tone has slowly spread over the Congress.

In 1986, V.N. Gadgil, among the more enlightened AICC general secretaries, told me in great confidence: “The feeling is widespread among Hindus that Muslims were being appeased.”

This thinking guided subsequent Congress actions, making it just as indistinguishable from the BJP as Jaffrelot and Verniers found in Gujarat. How “appeased” Muslims were became clear in the Sachar Committee report on their social-economic conditions in 60 years of Congress rule. They had, in their social status, tumbled even below dalits.

The Ranganath Misra Commission’s recommendation to help Muslims out of the plight described by the Sachar panel was put on the shelf, where it gathers dust till now.

The Srikrishna Commission, which named politicians directly involved in the 1992-93 Mumbai riots, where 900 people (mostly Muslims) were killed and their shops and houses gutted, has remained secret.

It will, nevertheless, be amnesia of a very high order to heap all credit for the current saffronisation at Narendra Modi’s door. It would require magic or miracle to have advanced the Hindutva cause with such rapidity in three years. Frankly, the ground was prepared over the past 70 years — by the Congress.

We must not forget the Hindu Mahasabha, RSS, Akhil Bharatiya Ram Rajya Parishad and Congress elements were quite “indistinguishable” from each other all along.

The Hindu Mahasabha’s founder, Pandit Madan Mohan Malaviya, was a four-time Congress president. His vision of India wouldn’t have been very different from that of Banaras Hindu University, which he founded.

Rajeshwar Dayal, UP’s first home secretary, in his memoirs A Life of Our Times, mentions an astonishing story about Pandit Govind Ballabh Pant, UP’s first chief minister, and RSS supremo Guru Golwalkar. The RSS chief was found with a trunkload of incriminating evidence of extensive plans for communal violence in western UP. The CM, however, enabled him to escape. Prime Minister Lal Bahadur Shastri sought RSS help for civil defence volunteers in the 1965 war with Pakistan. The list goes on...

It all leads to the inescapable conclusion, argued in my book Being The Other: The Muslim in India. Having accepted Lord Mountbatten’s June 3, 1947 plan for India’s Partition, the Congress de facto accepted the two-nation theory while publicly arguing against it. The secular incantation was a post-Partition afterthought, essential to keep Kashmir. On August 15, 1947, India seamlessly glided from British Raj to a Hindu Raj. If that was not the Congress’ intention, it should have been after it helped create Pakistan. Did it not know that the creation of Pakistan would give a fillip to demands, muffled within the Congress, for a Hindu Raj. Hindu “Rashtra” is a dangerously advanced version of the “raj” idea. Maulana Azad told Gandhi, Nehru everybody, and in writing, that Partition would lead to an “unadulterated Hindu Raj”. It could have been named Hindustan (just as the other country was called Pakistan). With Hindu at the helm, a more honest bargain on sharing power would have been possible. The painful process of a second distillation for a Hindu Rashtra could have been avoided.

The secular mumbo jumbo, has, in retrospect, had the effect of pulling wool over the eyes of the minorities and driving multitudes of enlightened Hindus into the ever-multiplying ranks of the silent.