Durga is the inaccessible, invincible one and omnipotent, the main source of energy for the creation. 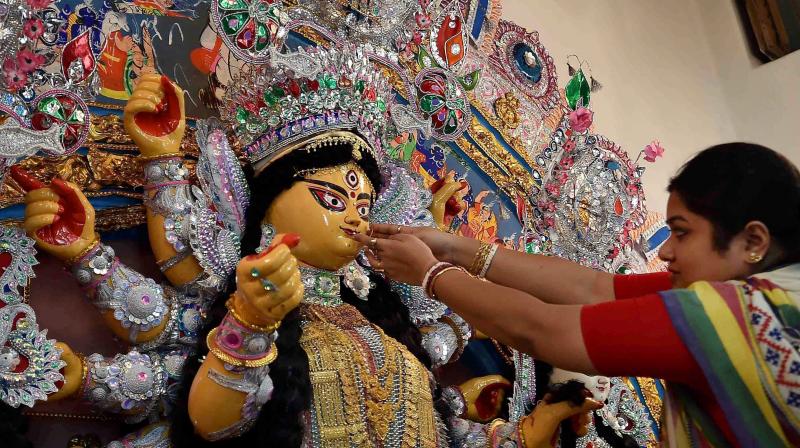 An idol of Goddess Durga being being decorated with gold ornaments during Durga Puja festival in Kolkata. (Photo: PTI)

Before the manifestation of the universe, when nothing else existed, there was the omnipresent formless divine consciousness. This is also called as static consciousness or “Shiva” in Hindu scriptures.

This shakti is also called as the Divine Mother, as everything in the universe has taken birth from its womb. The Divine Mother which has given birth to the universe, also nurtures and sustains it, and has the power to destroy (dissolve back) the same.

There are basically nine aspects of the Divine Mother which help it to create, sustain and destroy or dissolve back the universe and these nine aspects of divine mother are worshipped in Hindu religion as nine shaktis during the nine-day Navaratri festival.

Durga is the inaccessible, invincible one and omnipotent, the main source of energy for the creation. Jagadamba is the mother of gross universe. All the gross objects and beings have manifested from this Jagadamba aspect of Divine Mother.

Bhadrakali is the giver of auspiciousness, fortune and Annapurna is the one who bestows food to all beings. Sarvamangala is one who gives joy to all and Bhairavi is a good mother to good beings and bad mother to bad beings. Chandi is the fierce and terrifying aspect of the Divine Mother and is considered to be the destroyer of evil forces. She is a combination of Mahakali, Mahalakshmi and Mahasarasvati.

Lalita is the love aspect and passion aspect of the mother which help in procreation and giving divine experience through the physical body of beings and Bhavani is the giver of life force filled with mercy. The last one is Mukambika. “Mukam” in Sanskrit means home, place, destination or seat of being. Mukambika is the giver of ultimate destination to beings, that is, enlightenment and self-realisation.

As per the Hindu scriptures Durga in her Kali roop fought demons for nine days and eventually freed Mother Earth from their atrocities. Thus, the 10th day is celebrated as Vijaydashami meaning the day of victory, triumph over bad elements.

However, when a woman is subjected to cruelty, violence, atrocity and made to suffer then she can become fierce and terrifying like Chandi and destroy those cruel forces.

Navaratri is the reminder of potential feminine power in the universe and an occasion to offer gratitude to this feminine power in the form of woman for her contribution to creation, sustenance, growth, joy, peace and spirituality. Let us all celebrate this Navaratri with such pure emotions and feelings for women power.