Vikas and violence can’t go together

Development programmes work best when there is social stability. 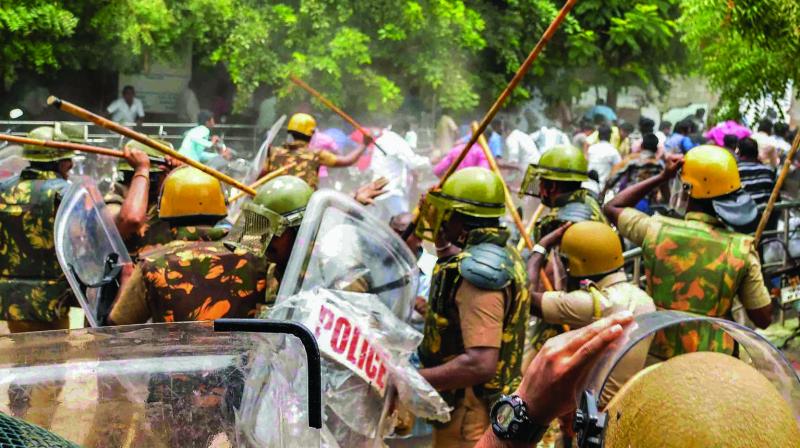 Mob violence is a marker of governance deficit. And as the 2019 general election nears, expect the Opposition parties to tap the issue. (Photo: PTI/Representational)

Rakbar Khan, 28, father of seven small children, bled to death. The young man was a labourer in Mewat, Haryana, one of the most backward pockets of the country. A ban on mining almost a decade ago rendered many like him jobless. Rakbar’s family took to selling milk for livelihood. Last week, Rakbar was off to Alwar in Rajasthan to buy cattle along with his friend Aslam. On the way, he was attacked by a murderous mob masquerading as cow protectors.

Rakbar’s death has triggered a war of words between the local police and local politicians in Rajasthan. There is an ongoing, ghoulish debate on whether the young man was lynched by the mob or whether the thrashing by the police did him in. The police thought it was its duty to take the cows to a gaushala before taking a severely injured Rakbar to hospital. Now, amid allegations of “custodial death”, they referred to the callousness as an “error of judgment”.

These verbal jousts are likely to continue till the next savagery hits the headlines. I have not visited the family but from hundreds of miles away, a few thoughts come to mind. One can’t help but wonder if Khan’s family, his neighbours, and other young men who are dairy farmers now think “if the mob doesn’t get you, the police will”.

Cynics will say there is nothing new about these stories and new savageries will edge the old ones out of the spotlight.

But let’s face some stark facts. Lynching — in all of its grotesque brutality — is not just murder. It is murder by a mob. It is also a political act, an act of intimidation and social control.

In America’s Deep South, in the 19th century and early years of the 20th century, lynchings of blacks weren’t just vigilante punishments. They were, as the Equal Justice Initiative notes, “celebratory acts of racial control and domination”.

Lynchings, wherever they may occur, are not just a human rights issue; they are also markers of the state of governance. As Justice Narendra Chapalgaonker, a former judge in the Bombay high court, pointed out in a 2017 article in India Legal: “When the victim is accused of some crime and the mob, without giving him an opportunity to defend himself, brutally murders him as a punishment, it is lynching. Therefore, it is not only a crime against a person but it is also a crime against constitutional governance. Its seriousness will have to be weighed from this angle.”

Officially, India doesn’t track lynchings. The home ministry told Parliament in March this year that the National Crime Records Bureau (NCRB) does not maintain specific data with respect to mob lynching incidents (involving the minorities) in the country, that “police” and “public order” are state subjects under the Seventh Schedule of the Constitution of India. It added: “The responsibility to maintain law and order and protect life and property rests with the respective state governments.” It said advisories had been issued by the home ministry to the states and Union territories from time to time, which are available in the ministry’s website www.mha.nic.in.”

However, in its March 2018 response to the Lok Sabha, the home ministry also noted that between 2014 and March 3, 2018, altogether 45 persons had been killed in 40 cases of mob lynching across nine states, and at least 217 persons had been arrested.

In the backdrop of the Supreme Court’s recommendation of a separate law to tackle this flood of mob violence relating to cow protection, child-lifting and so on, and lynchings becoming a regular front-page item, the Centre has set up a committee under home secretary Rajiv Gauba to deal with all the incidents of lynching.

The Narendra Modi government’s key argument is that the burden of responsibility of lynchings fall squarely on the state governments. The only complication with this school of thought is that the BJP doesn’t only call the shots at the Centre, it also governs 18 out of the 29 states in the country.

If the BJP can boast about its achievements in delivering electricity, toilets, financial credit, etc, in all these states, it must also own up to the murder by mobs there.

It is not that lynchings have not happened under previous governments or in Opposition-controlled states. But if governance is the trump card of the ruling party, it can’t afford to constantly deflect attention by the tired argument of “others are guilty too”.

Mob violence is a marker of governance deficit. And as the 2019 general election nears, expect the Opposition parties to tap the issue.

This does not mean that the Modi government has no achievements to its credit, but when it talks about “vikas”, or development, the question will be asked whether “vikas” has called on everyone.

Development programmes work best when there is social stability. A climate of fear in which some groups and communities feel more vulnerable or targeted is an impediment to the equitable spread of benefits of development.

This week, a top Congress leader made the point that programmatic successes are undermined by feelings of insecurity and fear, if the minorities and marginalised feel that the social framework in which they live is not inclusive, that their voices are not heard and if they feel intimidated by dominant groups.

As Justice Chapalgaonker argued in his article: “Assuming that the protection of the cow is one of the holy causes, no sane person would believe that lynching serves the purpose. The intended or unintended purpose of such crimes is to create fear in the mind of a section of society. This fear often extends beyond the communities and citizens become apprehensive to do or express anything which powerful persons may not like. This hurts the liberal democracy which has been assured by our Constitution. When people start taking the law into their hands and function both as prosecutors and judges, the whole constitutional system is endangered.”

The widow of Rakbar Khan comes to mind. What is her future? What is the future of the seven small children? Or the other young men in the community who are dairy farmers? How do they feel in the wake of Khan’s brutal murder?

This is not just about grief. It is also about “vikas”. Vikas and violence do not go together.