Opinion   Oped  27 May 2018  What does the Opposition show of unity signify?
Opinion, Oped

What does the Opposition show of unity signify?

TRS chief minister K. Chandrashekhar Rao did come to Bengaluru to meet the Gowdas but he did not join the unity rally for this reason. 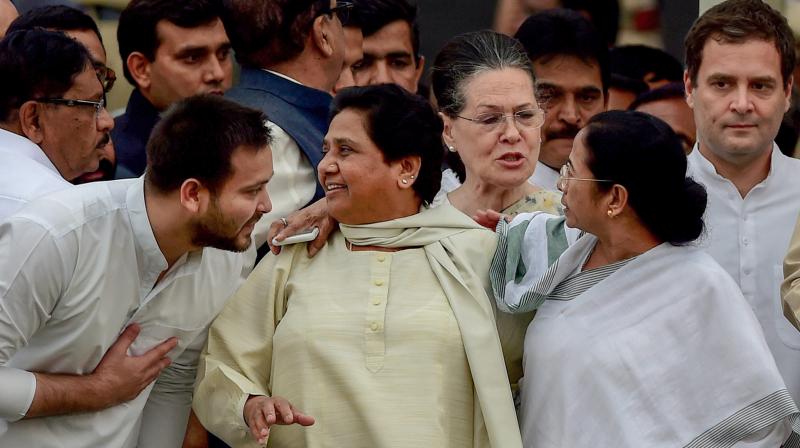 What does the gathering of the Opposition leaders in Bengaluru to celebrate the alliance of the Janata Dal(S) with the Congress signify? What is driving them to this unity and will this last for another 12 months when India goes to elections?

Let’s examine this. First take a look at the leaders who decided not to come to Bengaluru. Naveen Patnaik has his own faction of the Janata Dal in Odisha. In the 2014 Assembly elections, his party had got 43 per cent voteshare. The BJP’s voteshare was 18 per cent and the Congress’ was 25 per cent. This explains why Mr Patnaik was not present. For him, the Congress is an equal threat as the BJP, if not bigger. This equation may change in future and it is easy to see why — by next year, it will be the BJP that will be at Mr Patnaik’s heels. But there is no need for him to close his options at the moment and he’s doing the smart thing in waiting. He has allied with the BJP before. It makes no sense for him to link up with Rahul Gandhi now before the issue of 2019 is decided.

In Telangana, the leader of the Opposition is a Congressman. It is likely that this will continue into the general election. The BJP is not the force in the state that the Congress is, and to some extent continues to be. Telangana Rashtra Samithi chief minister K. Chandrashekhar Rao did come to Bengaluru to meet the Gowdas but he did not join the unity rally for this reason.

Now let’s take a look at those people who came for unity rally. The electorate of Bihar is quite fragmented. In their defeat of the BJP in 2015, the former mahagathbandhan of Lalu Yadav, Nitish Kumar and the Congress secured over 40 per cent of the votes. The two Janata Dals, the main components of the alliance, got about the same voteshare. Nitish’s Janata Dal(U) later went with the BJP while Lalu’s Janata Dal stayed with the Congress.

No party can dominate Bihar on its own and so it makes sense for the two Janata Dals to stay inside alliances. The Nitish-BJP alliance is stronger on paper and there is no option for the Lalu Yadav family but to look for help elsewhere. This explains their enthusiasm for nationwide unity against the BJP.

In Uttar Pradesh, in the last Assembly elections, the votes were split in the following way. The BJP had 41 per cent voteshare, SP 28 per cent and BSP 22 per cent voteshare. The SP won a majority in 2012 with 29 per cent voteshare and so it has held on to it. It’s just that after Narendra Modi moved to the Centre, the BJP has become much bigger in the state.

Mayawati and the Yadavs compete mainly for power in the state. They are lucky that there is no Assembly election in 2019. This makes it easier for them to attempt unity against the BJP, a unity that will most likely collapse when it comes to sharing power in the state. But for now their OBC-Muslim-dalit alliance looks powerful.

Vote transfers, of course, do not work in such a simple fashion. Psephologist Dorab Sopariwala has long said that coalitions in India work because coalitions are also coalitions of caste. But many of these parties have become desperate and do not want to spend decades in the Opposition.

In Bengal, which has 42 Lok Sabha seats, the Left has collapsed and the Congress has been made irrelevant. The BJP has become the Opposition and TMC leader Mamata Banerjee has no problem joining an alliance that opposes Mr Modi.

In Maharashtra, like in Bengal, the Congress split but NCP leader Sharad Pawar has not been able to dominate the party entirely as Ms Banerjee has. The coming together of the NCP and the Congress could be problematic for the BJP. The BJP votebank is not as solid in Maharashtra as it is in northern India. The party got only 27 per cent of the total votes in the last Assembly (it did not contest all seats) but came close to a majority.

The other three parties, including the Shiv Sena, all got about 18 per cent each. After two decades of uneasy partnerships, produced mainly because ideologically they are almost identical, the NCP and the Congress are likely to fight 2019 together without a problem.

In Andhra Pradesh, the principal Opposition is YSR Congress Party led by Y.S. Jaganmohan Reddy. Like in Bengal, the Congress has been taken over by a charismatic local leader and its infrastructure and leadership has been captured. For TDP leader chief minister Chandrababu Naidu it makes sense to keep his options open because his local threat is not only from the BJP.

The BJP strategy will be to make sure it does not antagonise those parties that are not a part of this alliance, like the Tamilian parties especially, who will be open to a post-poll alliance.

For the Congress, it has become necessary to make alliances but this is not easy to deliver at the local level.

A recent poll showed that the Congress was ahead of the BJP in Rajasthan and, more surprisingly, Madhya Pradesh, a state the BJP has governed for 15 straight years. In MP, the BSP won only four seats in 2013 (down 3) but it held on to over 6 per cent of the votes.

An alliance with that party will not be easy to drive for the Congress central leadership here because the state leaders will be reluctant to concede too much in a time when they sense victory. But an alliance with the BSP in MP could stop the BJP’s unbeaten run before it touches two full decades. It will take great maturity from the Gandhis to be able to pull such alliances off. But if they do it, 2019 will be a very interesting election for all of us to observe, no matter which party we support.