Opinion   Oped  27 Apr 2018  Why is a mysterious hijab-clad lady contesting every seat in Karnataka?
Opinion, Oped

Why is a mysterious hijab-clad lady contesting every seat in Karnataka?

Ms Shaik is not a comical entrant of that genre. There has been widespread demand for her party’s ticket. 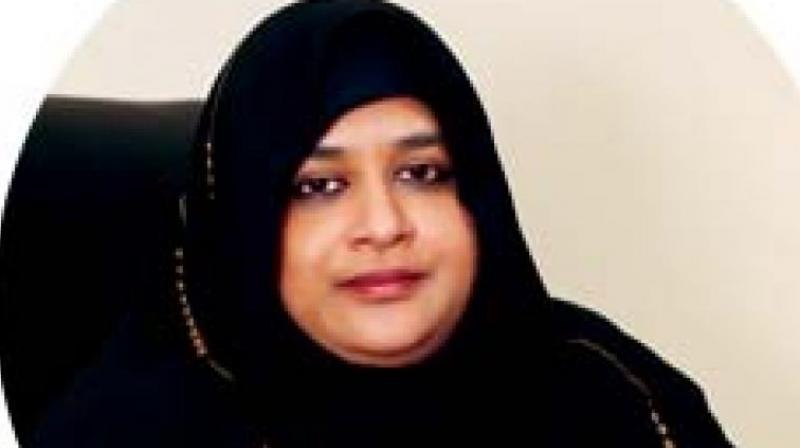 An itinerant journalist on four wheels in search of electoral wisdom in Karnataka may be forgiven for having been distracted not so much by the 45-year-old, hijab-wearing Nowhera Shaik’s liquid black eyes as her having staked her considerable wealth on these elections.

She is the CEO of the Heera Group of Companies, with its head office in Hyderabad, which she built up by her own labour and imagination, dealing with commodities ranging from building material to gold and diamond which in Hindi means Heera, the company she heads. Her obsession with diamonds permeates all. Who knows even her name, Nowhera, maybe a distortion of Naushera. It may be a contorted form of Nav-heera, which means novel diamond.

Indeed, a diamond also happens to be the election symbol of her political party. She is the president of the All India Mahila Empowerment Party, which she inaugurated last year at the five-star Lalit Hotel in New Delhi.

There is also consistency in the fact that Ms Shaik has headquartered herself in Bengaluru’s seven-star Leela Hotel. Leela’s receptionist was curt: “Sorry Sir, we have instructions not to connect anybody to Ms Shaik or her team.” How many suites does her “team” occupy?

In the world’s largest democracy, there will be many eccentric candidates. In Kanpur of the 1980s, an Independent candidate drew considerable attention by campaigning on horseback door to door, trotting between neighbourhoods.

Ms Shaik is not a comical entrant of that genre. There has been widespread demand for her party’s ticket. From over 5,000 aspirants, 224 candidates were selected on the basis of a criteria spelt out by the MEP. Her motto — Justice for Humanity. She stands by equality and justice for all Indians “irrespective of caste, creed and gender”.

Election finance is clearly not a source of anxiety for the MEP as it is for others.

Full house at party offices was once the index of a party’s health. Today, the absence of crowds is a good sign. It means that only those ticket aspirants who have hoarded a minimum of five to 10 crore of rupees need apply. MEP aspirants do not have to look for electoral alms. Their leader has enough. Trust malicious folk to trace sources of funds to the supposed beneficiaries of her electoral intervention.

She may stand on an all-embracing platform, but a hijab-clad lady will inevitably be seen as a “Muslim”. She may field non-Muslims but she will not escape being imprisoned in a certain perception. This will result in her largely ending up as a “spoiler” for anyone on the lookout for Muslim votes. It does not require rocket science to divine that the party thus harmed will not be the BJP. Many will see her as a BJP plant.

Muslim leaders who are not suitably timid have been comprehensively damned by the media — the non-Urdu ones specifically. In this category are the Owaisi brothers, even Azam Khan, and so on. Indomitable in their own enclaves, these leaders have an enormous capacity outside their spheres to augment majoritarian polarisation. For the same reason, the Owaisis (not Azam Khan so much) have a considerable fan following in Muslim pockets dotted across the country. But the way the communal dice is loaded these days, such pockets of fans and admirers eventually end up as unintentional guarantors for the opposite side.

Given this state of play, where does one place Nowhera Shaik? She differs in many ways from the Owasis. Asaduddin Owaisi is the most recognised Muslim face on television channels. Ms Shaik, on the other hand, has not been noticed even by the regional media in the midst of the fierce Karnataka campaign. And this despite the fact that so much exotica attends her persona.

Over coffee with eight senior journalists in my Bengaluru hotel room, I was astonished to discover that none of them had met or even seen Ms Shaik. She has been placing full-page ads in Kannada newspapers. She is not fighting this election in absentia.

There is sufficient communalism in the air, particularly in coastal Karnataka, for the politician to spot profit in polarisation. Here is an obvious target — a woman in a black hijab, millionairess, comfortable only in seven-star luxury, dispensing money to 224 candidates, organisers of rallies and the ubiquitous computer whiz kids. But the politician is as silent on her as the media is.

It is possible that the stout ones in politics do not see her as a threat despite the paraphernalia she brings to bear on this election. But, surely in an election that is so closely contested, a little polarisation here and a communal spat there would help someone in our perverse electoral fray. Why is she not being noticed?

Yes, the Congress did try to dissuade her from entering the Karnataka contest. “We told them we will contest all 224 seats. No compromise on that.”

There is little doubt that the overall beneficiary of Nowhera Shaik’s intervention will be the BJP. Her response to a question by a reporter of this newspaper is pertinent. What impact can she make in a race dominated by the major parties?

“Did he not defy conventional wisdom?”

It would, of course, be absurd to allocate substantive gains for MEP, but in a state where finance is known to have tilted the scales here and there, anywhere between two to five seats will enable her to find a corner seat at the table where the post-poll poker will be intense.

Neither of the major parties are likely to win outright. Pardon me for mixing metaphors, but Deve Gowda’s JD(S) too may need assistance to play an effective monkey between two cats.