A peaceful mindset is directly related to our behaviour and attitude and unfortunately not many people bother to check and control them. 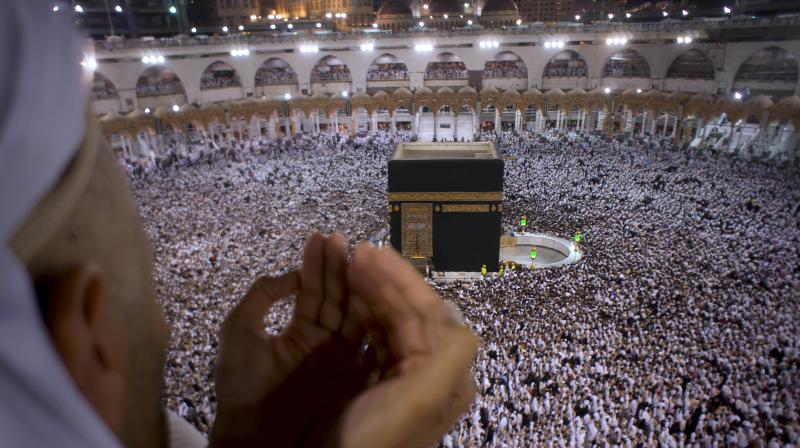 The Ka’bah symbolises the simplicity, unity and common sense of purpose of all Muslims.

It is a well-known fact that no growth, be it personal, professional, domestic or spiritual, can take place without a peaceful mindset. A peaceful mindset is directly related to our behaviour and attitude and unfortunately not many people bother to check and control them.

Five times a day from sunrise to sunset, practicing Muslims, constituting almost one-fifth of the world’s population, remove their shoes, cleanse themselves, unroll their mats and prostrate in prayer towards Mecca.

In the courtyard of Mecca’s Grand Mosque stands the ancient shrine: the Ka’bah (meaning cube), a cubed stone structure sheathed in black silk and cotton. According to tradition this is Allah’s House of Prayer, a stepping-stone to paradise. Set in its southern corner is the Black Stone, a “fragment of paradise” that fell from heaven. It is no larger than a loaf of bread and according to tradition, believers gain absolution for their sins by touching or kissing the stone.

The Ka’bah is not a temple, not a church, not a shrine. Not, at least, in the usual sense. It is rather the physical axis of the Muslim world, a focal point toward which Muslims all over the world pray five times a day and around which pilgrims to Mecca must perform the Tawaf, the ritualistic circumambulation. The supplications to God and other rituals — weddings, circumcisions, funerals and the slaughter of animals — always take place facing this navel of the world.

Originally established by God through Adam as the first place of worship for mankind, it was lost through the passage of time. The Ka’bah was rebuilt under divine instructions by Abraham, and later cleansed of false gods by Muhammad. The Ka’bah symbolises the simplicity, unity and common sense of purpose of all Muslims.

The cube-shaped structure is roughly 50 feet (15 metres) high, and it is about 35 by 40 feet (10 by 14 metres) at its base. Constructed of grey stone and marble, it is oriented so that its corners roughly correspond to the points of the compass. The interior contains nothing but the three pillars supporting the roof and a number of suspended silver and gold lamps. During most of the year, the Ka’bah is covered with an enormous cloth of black brocade, the kiswah.

According to tradition, this stone was given to Adam on his expulsion from paradise in order to obtain forgiveness of his sins. Legend has it that the stone was originally white but has become black by absorbing the sins of the countless thousands of pilgrims who have kissed and touched it. The Kasbah is also referred to in the Quran as the “first house established for mankind”, meaning, according to the foremost medieval commentator on the Quran, al-Tabari, that it is the first building ever consecrated to the worship of God.

The great Islamic scholar and acclaimed translator of the Quran, Muhammad Asad, considered its simplicity awesome. He observed: “There it stood, almost a perfect cube... entirely covered with black brocade, a quiet island in the middle of the vast quadrangle of the mosque: much quieter than any other work of architecture anywhere in the world… The builder knew that no beauty of architectural rhythm and no perfection of line, however great, could ever do justice to the idea of God: And so he confined himself to the simplest three-dimensional form imaginable — a cube of stone.”

It is a symbol, as Asad wrote, “of God’s oneness; and the pilgrim’s bodily movement around it is a symbolic expression of human activity, implying that not only our thoughts and feelings — all that is comprised in the term ‘inner life’ — but also our outward, active life, our doings and practical endeavours must have God as their centre.”