We talk of equality but the bitter truth is that even today, ‘we Indians’ discriminate and stereotype fellow Indians. 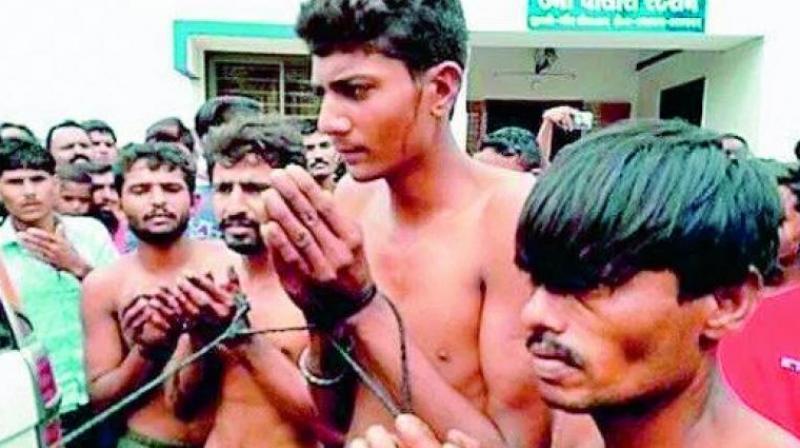 We talk of equality but the bitter truth is that even today, ‘we Indians’ discriminate and stereotype fellow Indians based on their caste, colour and socio-economic status….

Pakur is one of the six districts of Santhal Pargana commissionary in the state of Jharkhand. Santhal Pargana was named after the Santhals — the major Adivasi community of this region. In Pakur district, the importance of the Santhal population — grouped in the Scheduled Tribe (ST) category — can be gauged from the fact that two of the three Vidhan Sabha seats in Pakur district are reserved for ST candidates. Yet, nearly all year round, Santhals migrate from Pakur or are trafficked to faraway places.

At the exit gate of Pakur railway station, there used to hang a panel with the names of all the members of the station advisory board. There were mostly Hindus, high caste or influential caste Bengalis and Biharis — a Pandey (Brahmin), a Chatterjee (Brahmin), a Ghosh (Brahmin), if Bengali; Gwala (if Bihari). A few Muslims. But there was not a single Santhal on the list. No Dalit as well. No Turi (the bamboo basket-weaving Phul Dome caste) or Mareya (the ironsmith caste). The rural Muslims, called “Chasa”, meaning farmers, whose men — like Santhals — go to work in Mumbai or Hyderabad or at stone quarries, and whose women roll beedis to support their families and earn their dowries, didn't find representation on that advisory board either.

The Santhals and the Chasa are, in my opinion, the ones who make the most use of the railways, though most of them travel in general compartments, packed like chickens in a poultry cage.

A former district collector, a Rajput man, set up a sports body comprising wealthy Hindu Savarna men who run several businesses, stone quarries, etc. None of them has the remotest connection with sports. This sports body organises a marathon on January 25 and August 14 each year. The collector, the superintendent of police and other high officials of the district inaugurate the marathon and rich Savarna men tower over the proceedings though no Savarna participates in this marathon.

Most runners are young, sinewy Santhal men from the villages, many of whom run on bare feet. They are the ones who stand first. Yet, at the time of the prize distribution, the Savarna “sportsmen” herd Adivasi runners into lines, shouting at them: “Do you want the snacks box or not?” and “Do you want the free towel or not?” The winner of the marathon is not discussed any more.

At the local court, from the anecdotes the Savarna judges narrate about their posting in Naxal-infested districts, it is clear that they determined the crime of an alleged Naxalite — a Munda or Ho youth, usually — by the community he belonged to.

In school once a Brahmin male teacher, just out of context, asked me: “You are ST?” I was 12 years old then. My father had had the foresight to instil deep in my mind: “We are Adivasis. ST. Never forget.” I answered: “Yes, sir. I am ST.”

Another teacher, a Sikh woman, had a son who was in the same class as me and often picked fights with me. In retaliation, I gave it back to him. The matter went to the teacher, who then sermonised me: “Children of good families never fight. Children of sweepers fight.”

I wanted to tell her that I was a doctor’s son growing up inside a hospital campus. I knew well the lives of those people the caste-obsessed majority calls “sweepers”, and that no child of any “sweeper” had ever fought with me. Instead, children of respectable Savarna officers were the ones who teased me. Yet, I stayed quiet. I was about nine then, and even at that age, I realised my envied position as an Adivasi living the privileged life of the only child of two working parents and attending an English-medium convent school.

Some time ago, a medical college celebrated its golden jubilee. Photos and videos from the event posted on Facebook showed only Savarnas-Savarnas compering, giving speeches, backslapping each other in their comments. There was no SC (Scheduled Caste), ST, BC (Backward Caste), and OBC (Other Backward Caste) alumnus or teacher.

In India, despite the rhetoric of equality and pluralism, “DPS-eva Jayate”.

Hansda Sowvendra Shekhar is a medical officer with the government of Jharkhand. He is the author of The Mysterious Ailment of Rupi Baskey (2014) and The Adivasi Will Not Dance (2015).

Karamchedu massacre, AP (1985): More than half-a-dozen persons from the Madiga caste were killed and several injured by the Kammas, who were in the ascendant with N.T. Rama Rao, a Kamma, being Chief Minister at the time. They were itching to settle scores as the Madigas had supported the Congress and not the Telugu Desam. The main accused, Daggubati Chenchu Ramaiah, father-in-law of Purandeswari Daggubati, was assassinated by Naxalites.

Ranvir Sena massacres, Bihar(1995-2012): Ranvir Sena, an upper caste Bhumihar militia backed by politicians of every hue, has killed over 400 dalits and poor peasants in periodic attacks. Naxalites retaliated and were killed in encounters, but not one Ranvir Sena man was ever killed by the law and order agency.

Tsundur, Andhra Pradesh (1991): On August 6, 1991, the remote village of Tsunduru in Tenali revenue division was witness to a brutal massacre of Dalits in a carnage unleashed by the socially-dominant Reddys and Telagas. The attack left eight persons dead and many more wounded. Dalits fleeing for safety were caught and lynched, their bodies chopped into pieces, stuffed into gunny bags and thrown into the Tungabhadra drain.

Khairlanji massacre, Maharashtra (2006): On September 29, 2006, four members of the Bhotmange family belonging to a Dalit caste were murdered by a mob of 40 people belonging to the Maratha Kunbi caste (OBC) in the small village of Khairlanji in Maharashtra. The women of the family, Surekha and Priyanka, were paraded naked in public before being murdered. Enraged by a police complaint lodged the previous day by Surekha over a land dispute, the mob dragged out Surekha, her daughter and two of her sons, paraded them naked in the village, sexually abused them and then hacked them to death.

If the Holocaust is marked in history as one of its darkest moments along with the atomic bombs over Hirsohima and Nagasaki, let us not even for a moment believe that anyone had a monopoly over evil – not the colonisers from Spanish conquistadors and Portuguese plunderers, the slave runners from Africa to the Caribbean and USA, the men who imposed apartheid on South Africa, nor the human traffickers of today who take boat people across the seas in non-seaworthy craft.

The Great Holocaust Between 1933 and 1945 Hitler targeted Jews based on the belief that Germans were a superior race! Jews have been persecuted throughout history, but under Hitler six million of their men, women and children were systematically interned in concentration camps and gassed to death! This genocide came to be called the Holocaust!

The Japanese atrocities across Asia too came to be called the ‘Asian Holocaust’. Millions were starved to death or sent to labour camps and died! One of their experiments that killed people was to infect them with bubonic plague and dissect them when they were still alive! This of course is apart from using women as sex slaves!

Christian crusades: The Spanish inquisitions, Portuguese plunders and Dutch divisiveness played a vital part in the impoverishment that was to come to many parts of Asia, Americas and Africa. The atrocities committed in the name of religion, Christianity in particular and in the name of civilization, has annihilated several cultures and practices.

The decimation of the indigenous people in Latin America invaded by Europeans is estimated to be seven times that of the Holocaust! In 1492 when the Europeans arrived there was a healthy population if indigenous people of 50 million and more! By 1600, there were only 3.5 million left! They plundered the silver and carted away 100 million kg!

African slave-runners:  The coasts of Liberia, Sierra Leone and allied countries were the theatre of human trade. The body shoppers would have a choice to buy the best in the markets as if they bought cattle. This was a common sight in Europe and later in America. Apart from exploiting the natural resources they cracked the very backbone of the countries by taking away the most valuable human resources to build the wealth of their own lands.

Apartheid: ‘Apartheid’ was a consciously enforced all-White policy enforced by the government, even as the anti-Apartheid movement became global in the 20th century. South Africa had to face sanctions and the new government there after the first multi-racial elections with universal adult franchise that brought Mandela to power, instituted the ‘Truth and Reconciliation Commission’ to uncover the “truths about human rights violations” that happened during the period of Apartheid.

Pol Pot Genocide: The totalitarian dictator of Cambodia, later known as Kampuchea, Pol Pot, who ran a dictatorship with the Khmer Rogue forces, caused untold misery to the population including executions and gross negligence that resulted in the deaths of hundreds of thousands of people, until his (Pol Pot’s) death in 1998.

Caribbean vs europe nations are suing UK for its legacy of slavery in English speaking Caribbean, France for slavery in Haiti and Netherlands for Suriname. The lawsuits by Caricom (Caribbean community) is seeking reparation and the case is to be heard by the Hague.

In recent times, the most significant reparation demanded is the $ 1bn demanded by Guatemala from Johns Hopkins University that deliberately infected Guatemalan men, women and children with syphilis and gonorrhoea in order to study the efficacy of penicillin in the 1940 and ’50s.