Mystic Mantra: May this bond tie us together!

The word “raksha” means “protection” while “bandhan” is a “tie” or a relationship “which binds”. 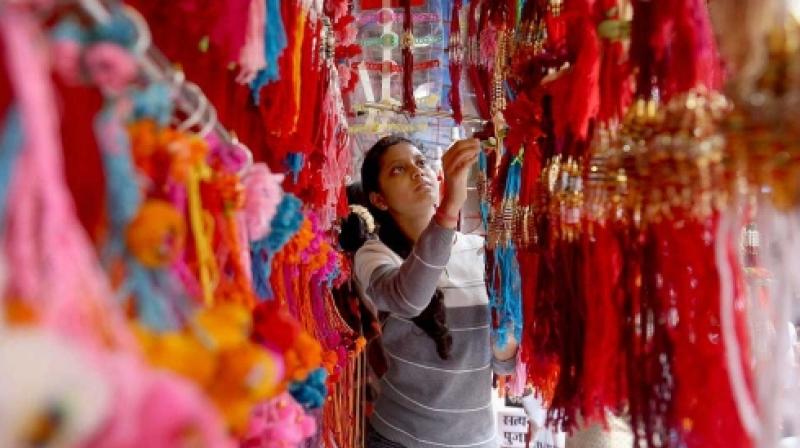 Akshyam” meaning, “may it be unending”, was a boon given by Krishna to Draupati on tying a small piece of cloth on his finger. The legend has it that on a Sakranti day, Krishna cut his finger while performing some task. His wife Rukmini asked the servant to get a bandage cloth, and Sathyabama, his second wife, rushed inside to bring it herself but Draupati, without wasting any more time, tore off a part of her sari and bandaged his finger. It was a kind of first “Rakhi” showing, on the one hand, sister’s pure love and caring attitude and on the other, brother protecting the sister under all circumstances. The “unending” sari of Draupati protected her honour in the royal court.

Raksha Bandhan, basically a Hindu festival, signifies a “knot of protection”. The word “raksha” means “protection” while “bandhan” is a “tie” or a relationship “which binds”. The ceremony, also known as “rakhi” or “rakhri”, symbolises siblings’ love, sister praying for her brother’s prosperity and well-being, and brother pledging to protect her.

The festival falls on the full moon day of the Shravan month of the Hindu calendar. On the morning of “Raksha Bandhan”, the ritual begins with the tying of a Rakhi, which may be a simple thread or a decorated one. The ritual is performed with “aarti”, containing a lighted lamp, indicating the presence of “Agni” devta (fire deity) and a sister saying a prayer for the health, happiness and well being of her brother. She prays, “May the Lord of all beings protect you, may the one who creates, preserves and dissolves life protect you... May all negativity and fears, spirits malignant and unfriendly, flee you, may Rishikesa keep you safe in the sky, and Mahidhara, upon earth,” as is mentioned in Vishnu Purana.

The most beautiful aspect of the festival is its extension to other faiths as well as to persons not biologically related to each other, hence, acquiring a secular outlook. “Raksha Bandhan” brings together people belonging to different religions, regions and nations. The best example in history is of Humayun, a Muslim ruler and Queen Karmavati of Chittor who had sent a rakhi to Humayun to protect her. Humayun was aware of this ritual and Hindu tradition. He vowed to protect his sister under every circumstances.

And who can forget Rabindranath Tagore’s poem on Rakhi and how he invoked the occasion of “Raksha Bandhan” to inspire love, respect and a sense of trust as well as protection among Hindus and Muslims. He writes, “The love in my body and heart, for the earth’s shadow and light, has stayed over years. With its cares and its hopes it has thrown a language of its own into blue skies. It lives in my joys and gloom, in the spring night’s buds and blooms— like a Rakhi-Band, on the future’s hand.”

Rabindranath Tagore started “Raksha Bandhan” as a festival of harmony and peace and to instil a feeling of brotherhood in society. Isn’t it the right time to invoke the festival of Rakhi to mark unity and peace!