A god like Ganesha offers the all-important promise of a good beginning. 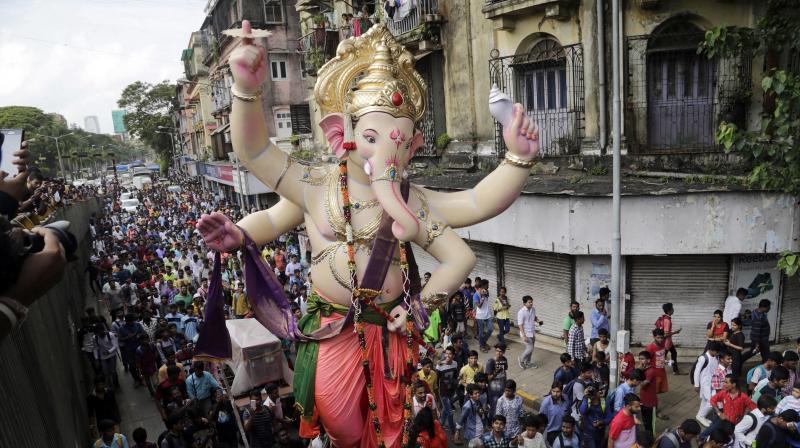 Devotees participate in a procession transporting giant idol of Hindu god Ganesha to a worship venue in preparation of Ganesha Chaturthi festival in Mumbai. (Photo: AP)

To endow major and minor experiences of life with sacredness — in the form of blessings, benediction, benevolence — might well be a primary function of religion, and one of the main reasons for its existence. Human beings often find a mismatch between their wants and desires and the world around them, where they feel a lack of control and where the odds are stacked against them. A god like Ganesha offers the all-important promise of a good beginning.

Child of the divine couple, Parvati and Shiva, Ganesha’s creation story is entertaining enough to have been recounted to generations of children by family storytellers. The most popular version is of a child created out of clay by Parvati to stand guard as she bathed. So diligent is the clay-child in carrying out his duty that he fails to recognise Shiva, the all-powerful lord of the universe, and bars him from entering his own home. An enraged Shiva, too, fails to recognise the child created by his wife, and beheads him in one fell swoop. A distraught Parvati begs him to return the child to life, which the lord does by transplanting an elephant calf’s head onto the child’s torso. And hence is born a beloved deity whose myth and cult have transcended boundaries of caste, community and culture and continue to grow with each passing Ganesha Chaturthi.

The potbellied, modaka-loving god of popular iconography has a resume as wide as his girth. Not only is he charged with good beginnings; to ensure them, he has the agency to remove obstacles, and create them where needed. This is probably in recognition of the fact that at times a smooth progression of one event might require the non-progression of something else that might be in conflict with it. How does Ganesha decide which progression to bless with auspiciousness? With the help of his wide-ranging intellect — buddhi, his spiritual prowess — siddhi, and his grasp of the material universe — riddhi. In fact, so crucial are these three tools to Ganesha’s work as Vighnaharta that some mythological texts credit them as being the names of his wives.

Ganesha’s ever-widening circle of influence has seen two important additions in the last century or so. One is the use of Ganesh Chaturthi for mass mobilisation starting late 19th century to foster unity against British rule.

People were brought together under the umbrella of a universally beloved and worshipped deity and the occasion used to educate them about the evils of colonial rule, hence incorporating a popular festival and deity into a larger nationalist cause. The other addition to the myth of Ganpati occurred with the wildly popular 1975 film,

Jai Santoshi Maa, in which the titular deity — Santoshi — some say invented by the film, was introduced as Ganesha’s child. Beyond mythology, Ganesha symbolises dealing with life with good cheer and a modak, which is always within reach at the end of his trunk.